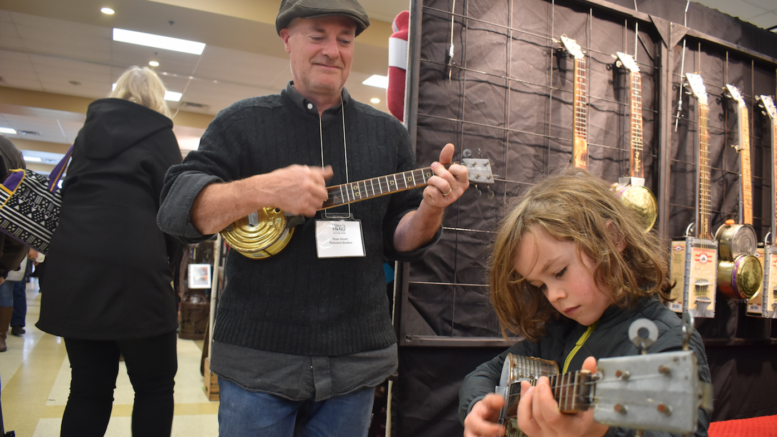 STRUMMING AWAY- Ross Stuart of Rossland Studios and Wilfred Miller-Riopelle collaborate on a tune at the 2019 Maker's Hand in Wellington on Saturday. (Jason Parks/Gazette Staff)

With a high winds threatening to put a damper on the newly revamped Maker’s Hand Fine Craft Artisan Show at Highline Hall this weekend, you can excuse organizers and exhibitors if they had an ‘Uh-oh’ feeling as power seemed to be at a premium in Prince Edward County on Friday.

And yes, the event billed as Eastern Ontario’s Finest Artisan Show did see a declining amount of attendees on Friday, the first day the three day event that welcomed customers to see and peruse the highest of high quality hand crafted goods by skilled crafters from all over Ontario and Quebec.

“Its was one of our best shows ever,” Peta Hall, chair of the organizing committee, told the Gazette Tuesday.

The show, founded in 2004,  has gained an excellent reputation for showcasing a wide range of fine craft by artisans who are dedicated to creating original designs using quality materials. The annual show is lovingly produced by an enthusiastic group of volunteers.

After 15 years of being stationed on the first weekend of November at the Prince Edward Community Centre, the show switched scenes to the Wellington & District Community Centre’s Highline Hall in 2019 and the organizer said the move was beneficial to all parties. “Nearly every single one said they love the new venue and many of our returning exhibitors said it was our best show ever,” Hall said. “While our numbers were down substantially Friday, our numbers were up substantially on Saturday and Sunday and our early tally indicates there was about 2,500 people that attended.”

With the new digs, the exhibitor booths were expanded much to the delight of the artisans.

“The hall is bigger, the lighting is better, the ceilings are higher, there’s more parking and the wi-fi is better here,” Hall explained. “I don’t want to downplay Rotary Club Hall in Picton because it was our home for 15 years-it was great but we’ve just outgrown it.”

A solid and unfailing connection to the internet is increasingly vital as a cashless society is stretching to events like the Maker’s Hand.

Fine art of all description and media, jewellery, boutique fashion, indigenous works and all sorts of examples of intriguing fine craft were available in Wellington this weekend.

Not only an exhibitor with her finely stitched (mostly) Japanese glass beaded jewellery with semi-precious stones, Picton’s Vicki Sharp serves as the Maker’s Hand Show Coordinator.

“It’s the fabulous  quality of what’s on display here. We have a vision for this show- it should be all Canadian and it should be fine craft where people are at the top of their game and making really beautiful, well constructed, hand-made objects,” Sharp said.

Another key aspect of the show is that the exhibitor selection committee only allows fine craft-no consumables of any kind.

“There aren’t that many fine craft only shows. People really love this show and follow it year after year,” Sharp said.

Ross Stuart of Rossland Studios was playing one of his hand-crafted ukuleles and enjoying his fourth Maker’s Hand event on Saturday.

The instruments look reclaimed with a previously used tin container however Stuart said looks are deceiving.

“The light weight resonated chambers are previously used but everything else is hand crafted and they are all made to be played and are all quality instruments,” Stuart said.

A four year veteran of the Maker’s Hand, Stuart said the early November show was a must for him.

“It’s the people who keep us coming back, the people down here are educated, interested and it’s just a very great place to spend a weekend and meet new customers,” he said.

“After the blackout (laughs), it’s been very busy and a lot to excited people that are really interested in the arts,” Miller said. “It’s really extremely well organized show.”