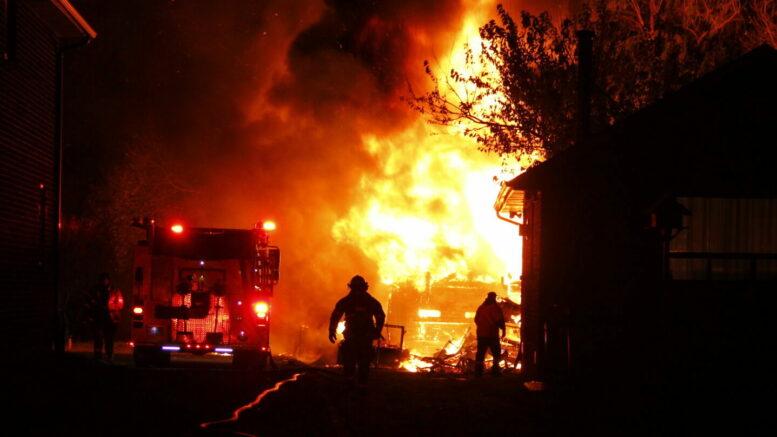 PEC Fire and Rescue responded to this early morning fire in 2019 near Consecon. (Desirée Decoste/Gazette Staff)

Through the hard work of local firefighters,  a home on the outskirts of Carrying Place didn’t receive any damage in a blaze this weekend.

A rude 2:24 a.m. wake up call for home owners on Hiscock Shores Rd  Nov. 2nd indicated a recreational vehicle (RV), a small detached garage behind it and a small pull trailer beside it were fully involved and although the conditions this weekend were windswept,  wind thankfully did not play a factor in this call..

Stations Six out of Consecon and Eight out of Carrying Place as well as Nine out of Ameliasburgh were on site with approximately five fire trucks and approximately 22 firefighters at the peak of the fire. FIGHTING THE FLAME Prince Edward County Firefighters battled the flame for a short while with no complicaitions. (Desirée Decoste/Gazette Staff)

Prince Edward County Deputy Fire Chief Robert Rutter reported there were no injuries in the blaze to either civilians or firefighters and that, as is practice, the aerial truck from Station One in Picton attended the scene. For any structure fire in Prince Edward County, it’s now an automatic to have the areal truck and the tanker rolling out of Picton.

“We would rather have them on the way then have to call them later,” expressed Prince Edward County Deputy Fire Chief Robert Rutter.

The fire was investigated and the cause was undetermined and won’t be pursued any further as there is nothing left of the RV. There was no estimated cost of damage at this time.

“RV’s look so substantial when there going down the highway beside you,” said Rutter. “But when they burn up there is nothing left of them.”

About half a dozen people called  911 to report the fire   and some callers hearing an explosion which was thought to be propane tanks exploding, but there were no propane tanks in the fire. Rutter said the bangs which woke the neighbourhood were likely the tires on the RV exploding.

“We believe when people were talking about the explosions that it was the tires on the RV that were exploding,” Rutter told The Gazette. “We think the RV was well underway before anyone realized what was going on because it was the bangs that woke people up. Everyone thought it was the propane tanks but there were no propane tanks in the explosion, strictly the tires.”

Firefighters were on scene approximately three and half hours making sure all the hot spots were out in the garage and elsewhere.

“We also kept a crew there over night until our fire investigator, Jim Young got there first thing in the morning,” Rutter said. “He (Young) went and looked at all the pictures, and the evidence shows it did start in the recreational vehicle.”