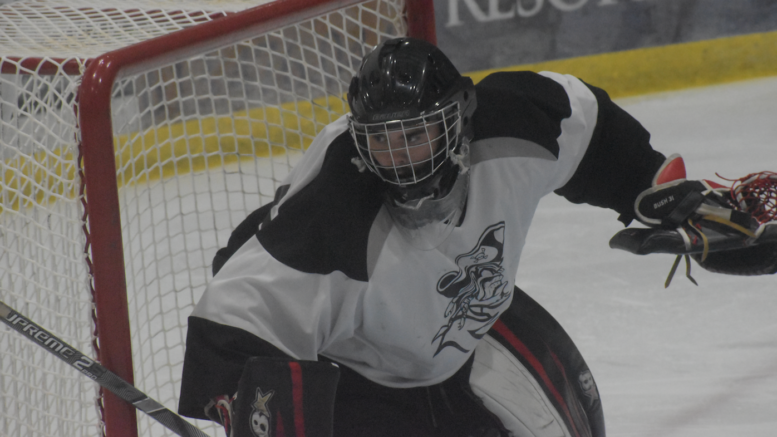 SAVING GRACE Picton's Brennan Bush made 45 saves for the Pirates Friday night in a 4-3 loss to the host Napanee Raiders. (Jason Parks/Gazette staff)

So close, so far.

That’s the story of the depleted Picton Pirates this weekend as they went up against the undefeated and defending Schmalz Cup winners in the form of the Napanee Radiers.

With just nine forwards in the lineup due to injuries and suspensions, the locals played it tough at the Strathcona Paper Centre Friday night and took a 3-3 game into the later stages of the third period.

With Pirates netminder Brennan Bush turning in a spectacular performance, it took until the 10:02 mark of the third for Raiders forward Bailey Matthews to push the hosts ahead for good at 4-3.

The next night, with not much reserves left in the tank, the Napanee kraken had far too many tentacles for the Pirates to fight off and the Raiders rolled to a 7-0 win.

With the losses, Picton fell to 5-9-1 and trail the Port Hope Panthers for the fourth and final Tod Division playoff spot by five points.

“We’re proud the effort the players showed this weekend,” Pirates General  Manager Chris Masterson told the Gazette Tuesday. “In the summer, we thought we might be battling for first place but we had so many surprise player movements- even as training camp opened- and we’ve found ourselves in another rebuild.”

Picton’s deficiency in critical mass comes as part of a steep development curve. Three former key Pirates in Landon McLellan, Derrick Vos  (Wellington) and Noah Brant (Powassan) are plying their trade at the Jr. A level this season while post-secondary schooling has led to the defections of Devin Morrison (Gananoque) and Justin Arnold (North Kawartha) which have also hurt immensely.

On nights where Picton is in need of game breakers-and the aforementioned skaters would be considered that- the young squad is still developing players to fill those roles.

Not that the current compliment can’t keep things exciting and that was certainly the case on Friday as Bush made 45 stops and the game was in question up until the final moments.

Picton’s Nick Kyte would beat Bailey Maracle at 8:25 of the first to push the Pirates ahead 1-0.

The Raiders responded as former Duke Evan Foley tied things up just over two minutes and later and Jacob Gilbert would tally 1:59 seconds after that to make it 2-1 for the hosts.

But Picton would get even before the close of proceedings in the opening frame as Kyte and Will Harrison would setup rookie Khaden Henry for his team leading ninth goal of the season.

The teams would play a scoreless second period and Bush was outstanding as the Raiders out shot the locals by a 17-2 margin.

In the third, the Raiders would move ahead as Devon King was set up by former Wellington Duke Brodie Maracle at 5:06 to make it 3-2.

But Aiden MacDonnell’s first PJHL goal set up by Henry at 7:12 tied things back up at 3-3.

“Napanee is a team built to capitalize on any mistake or miscue you might make and that’s what they did in the third period,” Masterson said. “They don’t miss too often on the chances you give them.”

Gilbert and Foley had a hand in the game winning tally by Matthews who is the son of former mid 1990’s Picton Pirate Scott Matthews.

On Saturday night, Masterson thought the club might be in for a tough contest- playing in a back-to-back night against arguably the best team in the PJHL.

“You could tell there wasn’t much energy left and when teams like Napanee are able to get up a couple of goals on us early, it’s a grind because we know we struggle to score a lot of nights,” The General Manager added.

Goals by Devon King and Mashall McFarland were enough to essentially put the Pirates down and out in the first period.

Nic Case and former OHLer Aiden McFarland would beat Pirates netminder Eric Tessier in the second and former Wellington skaters Foley, Mack Warren and Maracle would all count in the third period as the uber-talented Raiders were far too much for the locals to handle on Saturday.

But there were some smiles around the Huff Estates rink on  Saturday as Picton celebrated three decades of junior hockey in the town with a Picton-vs-Napanee alumni game prior to the regular season contest.

“It was really amazing to see some of the old faces and to get upwards of 200 people in for an alumni game was really nice to see. It helps raise some funds for us and we are so appreciative of everyone who came out and took part,” Masterson said.

Picton would get a pair of goals off the stick of Greer and former Pirate puckstopper Matthew Kaludis was outstanding in his half of action but the Raiders alumni emerged winners by a 5-3 margin thanks to a late empty net goal.

There was plenty of finger pointing afterwards but most of the blame for the loss was likely due to the efforts (or lack thereof) of the Pirates bench staff which included this reporter who served as General Manager of the hockey club from 2009 to 2011.

Picton hosts Gananoque on Thursday and travels to Little Britain to do business with the Merchants on Saturday evening.