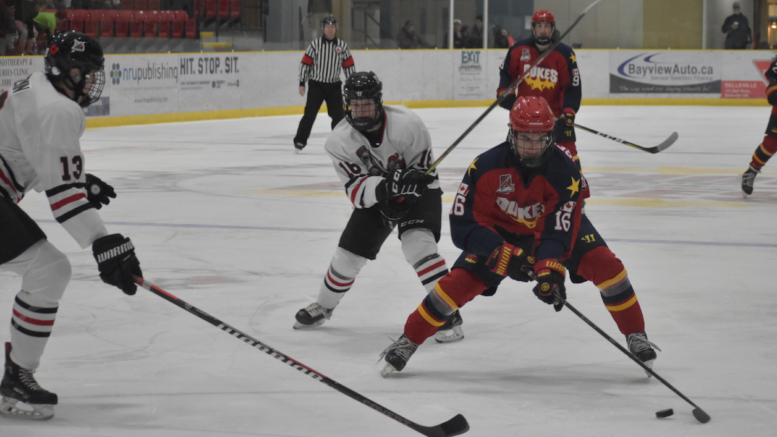 ON THE MOVE- Wellington's Jacob Vreugdenhil works his way into the Mississauga zone during the Dukes' 3-1 win at Lehgih Arena Friday night. (Jason Parks/Gazette Staff)

Given their druthers, the Wellington Dukes would’ve liked to have cruised to a four point weekend in a pair of Ontario Junior Hockey League games.

But the best laid plans of the local Jr. A hockey club went by the wayside in a 3-1 home ice win over the visiting Mississauga Chargers on Friday night and a 2-2 against the host Trenton Golden Hawks on Sunday evening.

A three out of a possible four point weekend ensures Wellington (18-3-2, 38 points) stays on pace with the top OJHL teams.

With an .826 winning percentage, the Dukes trail only the scorching hot Toronto Patriots (.886) in that department.

Trenton leads Wellington by two points for the top spot in the East division but the Dukes have a whopping four games in hand on their Loyalist Parkway rivals.

On Friday, it wasn’t always pretty but the Dukes slipped past the Chargers and needed a goal midway through the third period to get the result they should have been assured if the contest was played on paper.

Frank Boal was sensational in the Chargers net, making 35 stops for the visitors and giving the outfit from Mississauga a chance to come out of Wellington with at least a point. Dukes bench boss Derek Smith said he was happy his club stuck with the process and limited the Chargers offensively.

“It wasn’t the greatest looking hockey game but it was a testament to sticking to our game plan defensively for 60 minutes and putting the effort in,” Smith told the Gazette.

With time winding down in the first period, Dan Panetta took a Brett Humberstone feed at the blue line  and danced into the Mississauga zone.

The Belleville native delivered the puck on goal but it took a strange hop off a Charger stick and slipped past Boal for a 1-0 lead at the 18:18 mark.

Fate and happy bounces would even out in the second period as the Chargers rescinded.

Matthew Sop’s shot from the slot would be stopped by Wellington starter Matthew Dunsmoor but the puck would end up flipping end-over-end towards the top of the Dukes net.

Dunsmoor tried to corral it but a cruising Chase Strychaluk went had to the Wellington cage and the biscuit bounced off the Mississauga forward, possibly his glove, and into the Dukes net.

Wellington protested but to no avail and the goal scored at 8:45 stood.

After getting outshot badly in the first two periods, the Chargers would outshoot Wellington in the third but it was the Dukes picking up the game winning goal off a nifty play that started behind the Mississauga net.

After Jacob Breckles point shot was bunted away by Boal, Ben Woodhouse would drive to Gretzky’s office and make a smart, behind-the-back pass to an awaiting Frank Vittucci who wasted now time depostiing the puck into the Mississauga cage with just under 10 minutes left in play.

Wellington’s leading scorer Jake Gagnon would salt the game away with his tenth goal in just five games, potting an empty netter with just 18 seconds left on the clock to make it a 3-1 final.

On Sunday, Wellington would take on Trenton, a club they have owned so far this season by virtue of three straight victories including two at the Duncan MacDonald Memorial band box in Quinte West. Wellington defenceman Quinn Hanna set up the go ahead goal in the second period of a 2-2 tie between the Dukes and the host Trenton Golden Hawks Sunday night. (Jason Parks/Gazette Staff)

Trenton must have been chomping at the bit to prove they could beat the Dukes but a 2-2 was the end result of a highly entertaining and hotly contested hockey game.

“It was a really good game by both teams and we were really happy with the pace,” Smith said.

Wellington has looked at home playing on the smaller ice surface in Trenton and Smith said his squad is adapt at paying on ice where things happen fast.

“Playing in Trenton, typically your first option is your best option and when you are able to play as a five man unit, you can predict what each other are going to do,” Smith said.

Trenton’s Griffen Fox would stake his club to a 1-0 lead late in the first as he converted an Andrew Suriyuth pass at 14:37.

But Wellington would battle back in the middle stanza with a pair of goals.

Frank Vittucci would find time and space to deliver the puck to Ben Evans who made no mistake, beating Trenton’s Oliver Troop 63 seconds into the period.

Wellington would open their play up in the second, sending 15 shots at the Trenton net and, with under five minutes left to play in the frame, the pressure would pay off as Vitucci was spotted by Quinn Hanna.

The Yardley, PA native notched his second point of the game and fourth of the weekend when his blast beat Troop with 4:46 left in the second.

Wellington would start to bend somewhat in the third and had to be bailed out by Dunsmoor who got a second consecutive start.

Finally, Trenton’s Dylan McMahon would solve the Wellington goalie 2:23 to go to make it a 2-2 score.

Both Dunsmoor and Troop would have to make some massive stops in both the 4-on-4 and 3-on-3 overtime periods but neither team budged and the contest ended at 2-2.

Given it was on the road and the number of games in hand Wellington has on Trenton, a deadlocked 2-2 decision likely favours the Dukes in the long run however the game was the first of the season the Golden Hawks have not allowed the locals to grab a full compliment of points in a contest.

“Matthew Dunsmoor was a rock for us back there and he came up with some huge saves for us in both games,” Smith said. “He’s playing so well right now and he gives us the confidence to know that no matter who we are playing against or where, we are likely walking out of there with at least a point.”

Wellington heads to Whitby on Tuesday for a rare mid week affair against the Fury.

The Dukes are on the road this weekend, playing in Lindsay on Friday and in Brampton on Saturday.

Wellington’s next home action is Thurs., Nov 21 when they host Pickering.

Ledes at Lehigh: Wellington will be without defenceman Noah Massie for a couple of weeks after the blueliner was injured on Friday night. The injury is not as serious as the ailment that forced Massie out of the lineup for the first six weeks of the season…Dunsmoor was chosen as runner-up OJHL Goaltender of the Month for October, going 3-1-1 and posting a 1.71 Goals Against Average and a .950 save percentage.