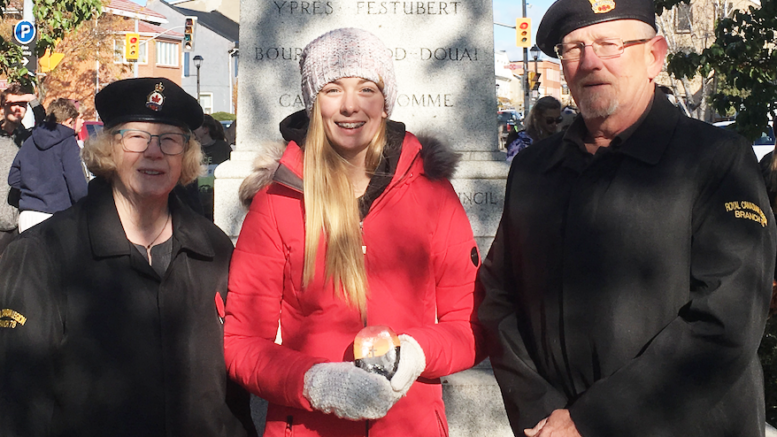 In the clear midday sun of Nov. 8th, over 90 PECI students ventured forth to the Picton Cenotaph, bringing with them tokens of remembrance for servicemen and servicewomen from Prince Edward County.

As a tribute, the students painted rocks which were then dedicated to any number of fallen, local soldiers.

Diane Kennedy, President of the Royal Canadian Legion, Branch 78, along with Tom McCaw, Poppy Chairman and First Vice of the local branch, witnessed the tribute in anticipation of Remembrance Day.

“I think the most important thing, after taking care of our veterans, is for the young people to know what the veterans, those who have been in any war-or are still alive-have done for them,” said Kennedy emphatically. “That’s why we have or freedom today. They gave that to us. Every single person in this town has the life they do because of veterans.”

When asked whether or not she felt the meaning of Remembrance Day was fading with the younger generations, Kennedy expressed optimism.

“We’re doing literary and poster contests and all the schools in the County are involved,” she said. “Last night, we had 70 essays, poems and posters. I think that’s wonderful. The teachers are doing a great job, but it’s every single person’s job.”

Kennedy further iterated that for many young people, unless they’re related to those who have served, they aren’t necessarily exposed to the sacrifices made by people in service.

“All of our vets are going,” Kennedy stresses, “We’ve lost six this year alone.”

McCaw interjected that, when he began with Branch 78, he had the pleasure of getting to know a local World War 2 Veteran, and prisoner of war survivor, Russ Burrows.

“When I joined the legion, I had the pleasure of getting to know Burrows,” reflected McCaw. “He taught me the trade. The respect I have for that man…he was one of the nicest men I’ve ever known.”

Like many other long-lasting WWII veterans, Burrows passed away two years ago.

Much of the money raised by the poppy campaign, which runs from mid-October until Remembrance Day, goes toward the local hospital. But Kennedy also notes proceeds go towards homeless veterans, guide dogs and Air Cadets.

Eagan states the project was a labour of love to try and involve students more in Remembrance Day ceremonies, in light of their dwindling attendance.

“My mother, who works at the legion, is always talking about how there isn’t so much community involvement from younger people anymore,” explains Eagan. “A lot of the schools used to come to the cenotaph for Remembrance Day, but it’s harder with the larger school, so I wanted to figure out something to do with the intermediate kids, something they could do that would make it more realistic and personal for them.”

Before laying their rocks on the cenotaph, Grade 7 student, Alexis Crowe, took a few moments to speak with the Gazette.

“Remembrance means remembering people that fought in war and passed away because they wanted to have free will for our country,” said the young Crowe.

Crowe said part of why she wanted to participate in the remembrance project was an eagerness to learn more about veterans.

“My rock is painted for Ralph Leavitt, who died September 27, 1918. Some people chose to do relatives, but I didn’t really have any,” said Crowe.

Another student, Lily Anderson, also spoke with the Gazette.

“It’s important to know who fought for you and took their life to give you what you have today. It means a lot to me and it’s just nice to remember. I commemorated C.H. Harvey. He lived in Hillier and I know that place, so I thought it was pretty cool,” said Anderson.

The PECI students have also created a facebook page, where you can learn more about this project and see photos of the painted rocks. Please visit: https://www.facebook.com/pecveteransrock/.