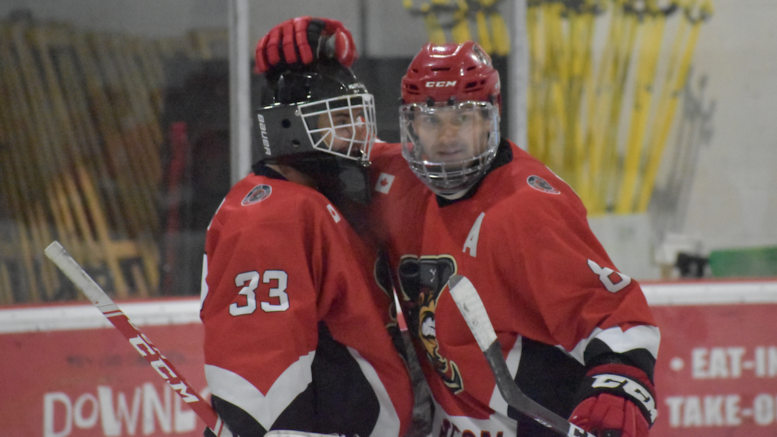 If the Picton Pirates are going to interject themselves back into the Tod Division playoff race, a productive weekend such as the one the Provincial Junior Hockey League club put together most recently will be a must.

Picton moved their record to 6-9-2 to gain a few steps on the fourth place Port Hope Panthers and now trail their division rivals by six points with just under half of the 2019-20 PJHL left to go.

Goaltender Eric Tessier and Picton blanked the visiting Gananoque Islanders Thursday night 5-0 before the club traveled to Little Britain and dropped an overtime decision to the Merchants.

While the club might be somewhat miffed at outshooting the Merchants and not coming away with the extra point in their battle against the Orr Division squad, three out of a possible four points is not a bad return considering the Pirates were winless in three games entering play Thursday night. 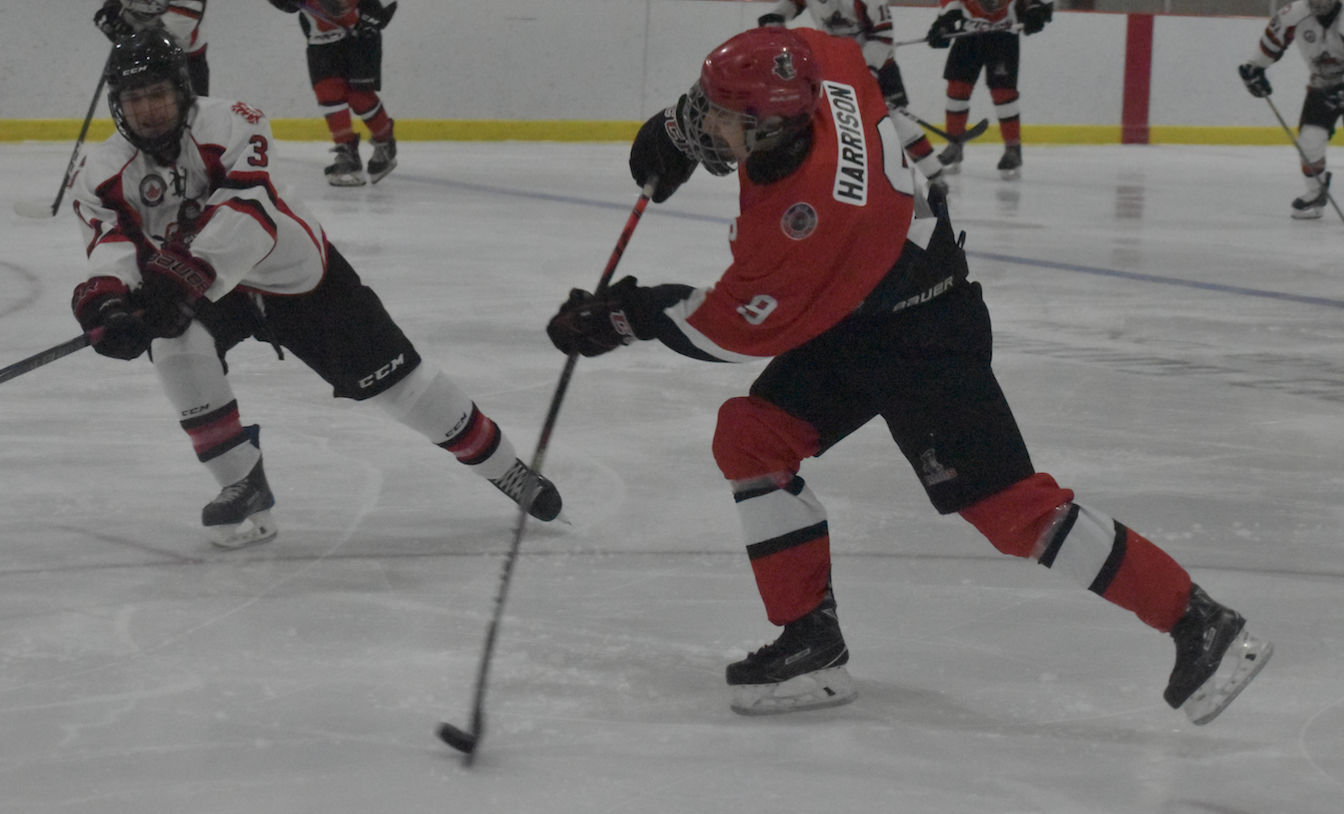 Picton native Will Harrison was the Tod Division Player of the Month for October, scoring three goals and adding 11 assists in seven games for 14 points. (Jason Parks/Gazette Staff)

Pirates coach Tyler Green said the club stuck to the game plan against the Islanders and got some great work out of Tessier, particularly in the first period while the Bucs were getting their bearings.

“(Tessier) made some big saves early on that really kept the momentum in our favour,” Green said.

Picton opened the scoring at the 12:28 mark of the first period as rookie sniper Khaden Henry converted a Nick Kyte feed to stake the locals to a 1-0 lead.

In the second, the Pirates continued to bring the play to the visitors who seemed to become exceedingly disinterested as the frame wore on.

Tod Division Player of the Month Will Harrison would spot an open Kurtis Wood at 3:58 of the second and Picton made it a 2-0 lead.

Just under four minutes later, veteran Griffen Conger got in on the scoring parade as he beat Isles netminder Jeremy Piazzi at 7:36 to make it 3-0 in favour of the hosts.

Henry picked up an assist with a heads up pass.

In the third, Harrison was at it again, setting up Henry for his second of the contest just 22 seconds in and the Belleville native capped off his second junior hockey hat trick (both against Little Britain) with under three minutes to play as he swatted home a nice Conger feed at the side of the Gananoque net.

“We’ve been happy with what we’ve seen out of Henry so far and he always seems to have a boost when he plays his old club in Gananoque,” Green said. 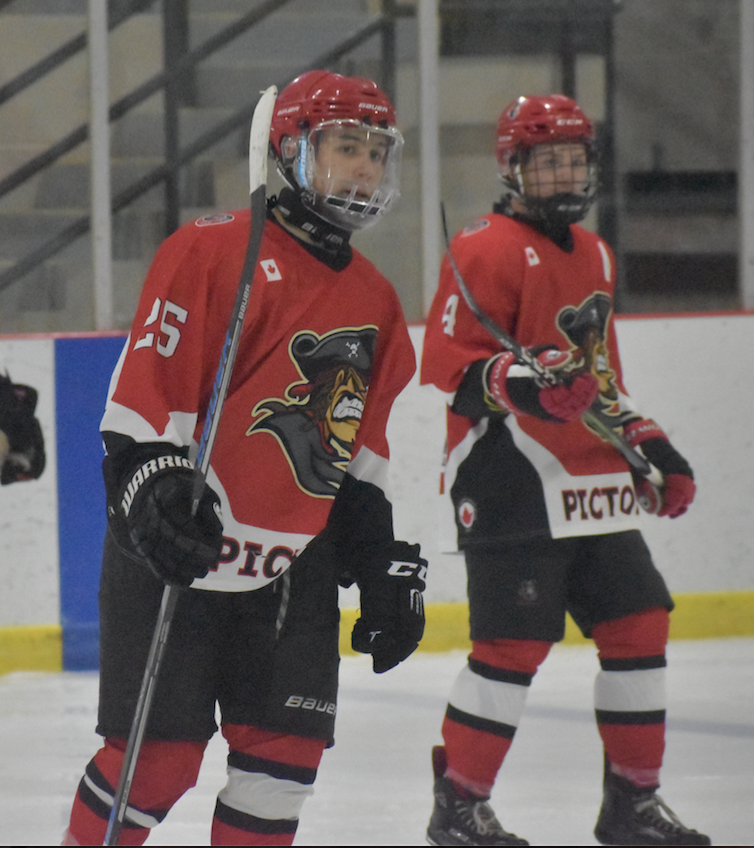 Henry was part of the return from a trade that saw former captain Devin Morrison head east early in the preseason.

The Islanders tried hard in the closing minutes to spoil Tessier’s outing with a late tally but the Kingston native was spot on, stopping several drives in the final minute and picking up his first PJHL shutout.

While Tessier might not have been busy in the second frame, only seeing four volleys come his way, his work early and late in the contest was a large factor in the Pirates win.

On Saturday, Picton had two play catch up twice despite out shooting the Merchants in the tiny Little Britain Community Centre.

Goals by Cody Bricknell in the first and William Vanhalteren early in the second put the host Merchants up a pair.

But Picton battled back with a pair of goals in the second.

Kurtis Wood beat Little Britain netminder Tyler Roberts at 3:58 on a solo effort and then it was rookie Brayden Adams taking a Conger pass and lighting the lamp for the Frankford native’s third of the campaign.

Tied at 2-2 after two, Picton would give up a go ahead goal early in the third period off the stick of Tyler Watson.

However, the Pirates didn’t wait around long and Conger found Kyte for the defenceman’s second goal in as many games at 6:59.

In the extra session, it was Little Britain’s Jordy Harris getting open and putting a puck past Picton’s Brennan Bush at the 5:06 mark of overtime to make it a 4-3 decision in favour of the hosts.

While Picton might have stewed somewhat immediately following the game, Green said the club was generally happy overall to take three out of a possible four points following a home and home sweep at the hands of the division leading Napanee Raiders last weekend.

“The guys were down a bit after last weekend but they were able to put together back-to-back solid efforts and have a productive weekend,” Green said.

While games in November sometimes don’t have the same magnitude as those played in late January, A four point contest against the Port Hope Panthers at home on Thursday night is certainly a sizeable fish the Pirates would like to reel in.

“We know where we are and where they are in the standings,” Green confirmed. “They’ve been getting a lot of good results for them recently so we know we need to be ready on Thursday night.”

After hosting the Panthers, the Pirates are in Lakefield to take on the Cheifs on Saturday night.

ON BOARD WITH THE PIRATES: Picton and Gananoque swung a deal prior to the game on Thursday as Consecon native Matt Poole was sent to the Isles for Dawson Lindsay. Lindsay played for the Qunite AAA Major Midget program

last season.”We didn’t want to move Poole but he’s attending post-secondary school in Kingston and the travel was getting to be too much,” Picton’s General Manager Chris Masterson said. “It’s a trade that was done for education purposes but we are really happy to get a player like Lindsay back as part of the trade.”