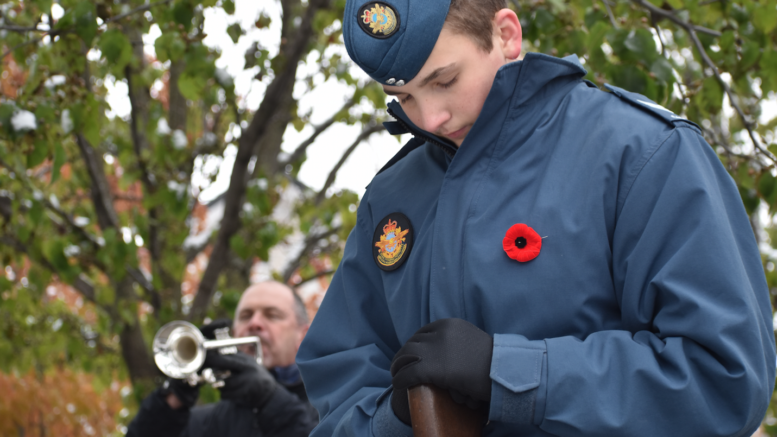 Braving snow and cold, blustery conditions was part of the solemn act of remembrance in Prince Edward County on Monday.

Ceremonies honouring local war dead and the soldiers who bravely served this nation-both at times of war and peace- were organized by the Royal Canadian Legion branches serving Picton, Wellington and Consecon as residents, school children and veterans took the opportunity to pay tribute to those who returned home and those who made the ultimate sacrifice in the name of peace. 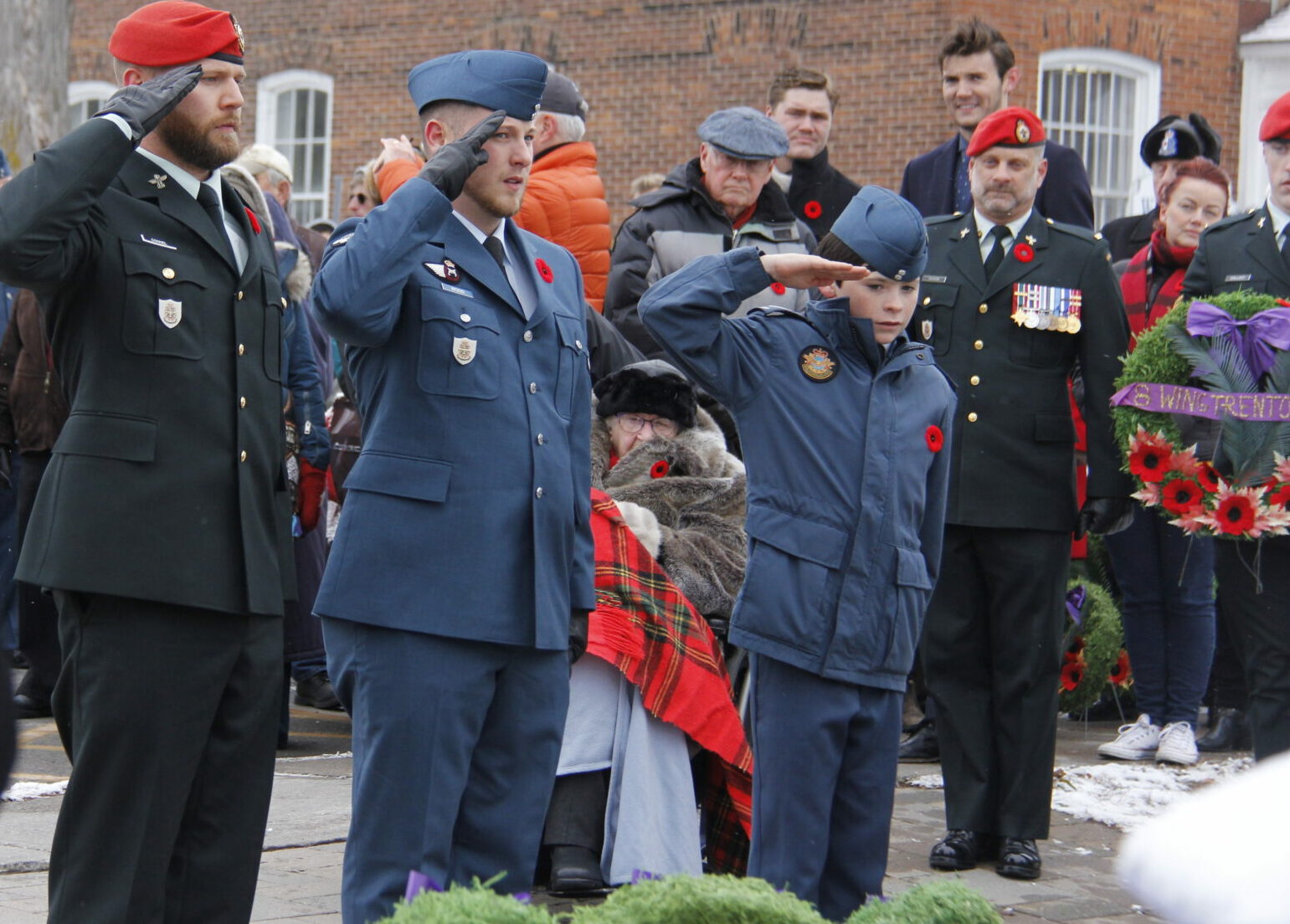 The Picton Cenotaph boasted over 100 stoic souls who took part in Remembrance Day service. Young and old gathered to lay wreaths, to hear legion members speak in tribute and to stand for the annual, two minutes of silence to honour those who have served.

Being a more solemn community event than some others, the group stood in attention, in the unusual quiet and unseasonable cold, as snow fell softly on the shoulders of civilians, servicemen/women, and legion members alike.

Picton native Jenn Bryant was one such observer. She and her family make Remembrance Day an annual tradition, often going to ceremonies at the cenotaph together.

“My family and I try to come here every year. Luckily I’ve worked in the past with organizations who have given people the day off, so that’s been really nice,” said Bryant. “ For quite a few years, I worked with the Canadian Red Cross. Because of their previous involvement with the war effort, they always give people the day off.”

Bryant explained that, for her family, there is a personal connection to World War 1 in particular.

“Again, now I’m working with an organization that does the same thing so it’s great to be able to come here to honour and recognize people who have sacrificed and put themselves outside of their comfort zones to go fight a war. It’s a small thing we do every year. It’s pretty important,” enthused Bryant. “Actually, my great aunt served with the American Forces as a nurse in WW1. So, we have a lot of her medals and pictures. We always bring those out around this time of year, so there’s a bit of a family connection.” 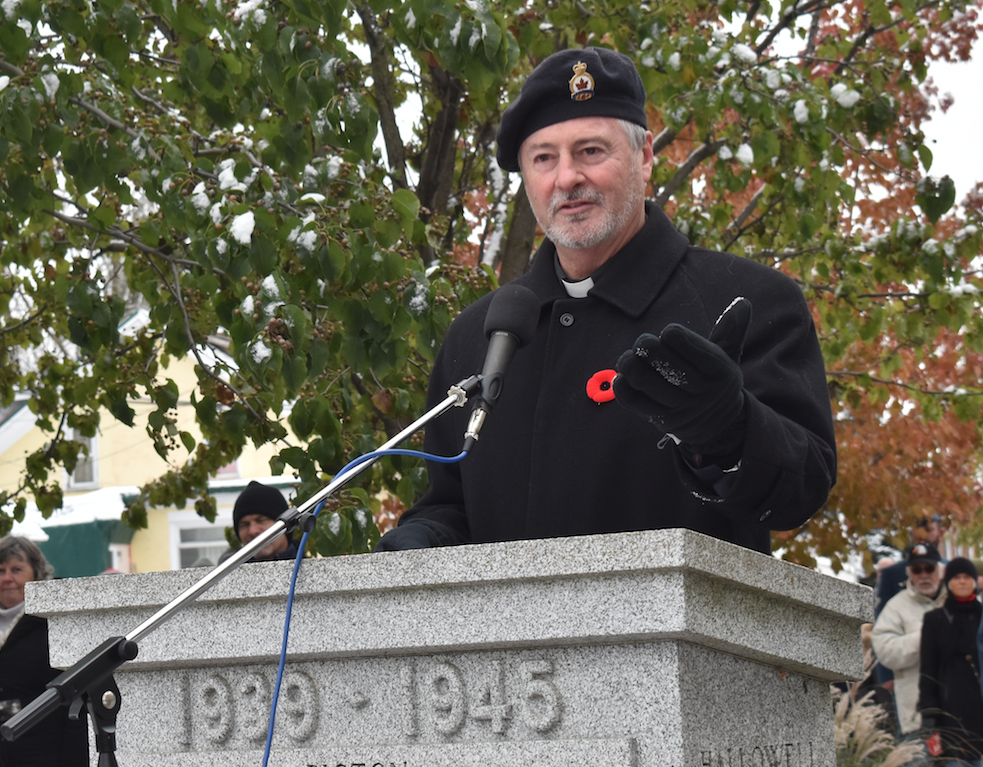 When asked whether she felt any trepidation about coming to the cenotaph given the inclement weather, Bryant was not ashamed to admit she doesn’t like the cold, but believes Remembrance Day is important enough to brave the elements.

“I’m not a big fan of the cold, but for the amount of time it takes me to stand here, it’s far less of a sacrifice than being on the front lines and really putting yourself at harm. A little bit of cold is very easy to put up with in relation to that situation,” said Bryant.

Padre Richard Hamilton spoke to the crowd after the familiar and often teary reading of In Flanders Fields, and of course, the sounding of the last post.

“We remember those who served for us, so to stand for a few moments in the cold may be a wonderful tribute to those who spent weeks and months on end unable to get warm, with cold, wet feet,” he said. “We express our sincere appreciation for those who have helped to make this service possible. To those who have helped at the church and those here at the cenotaph. We’re thankful for the personnel from 8 Wing, Trenton and the Hasty P’s for their presence, as well as the presence of Picton’s 851 Squadron of the Air Cadet League of Canada, members of the Picton Legion and those here laying wreaths today.” 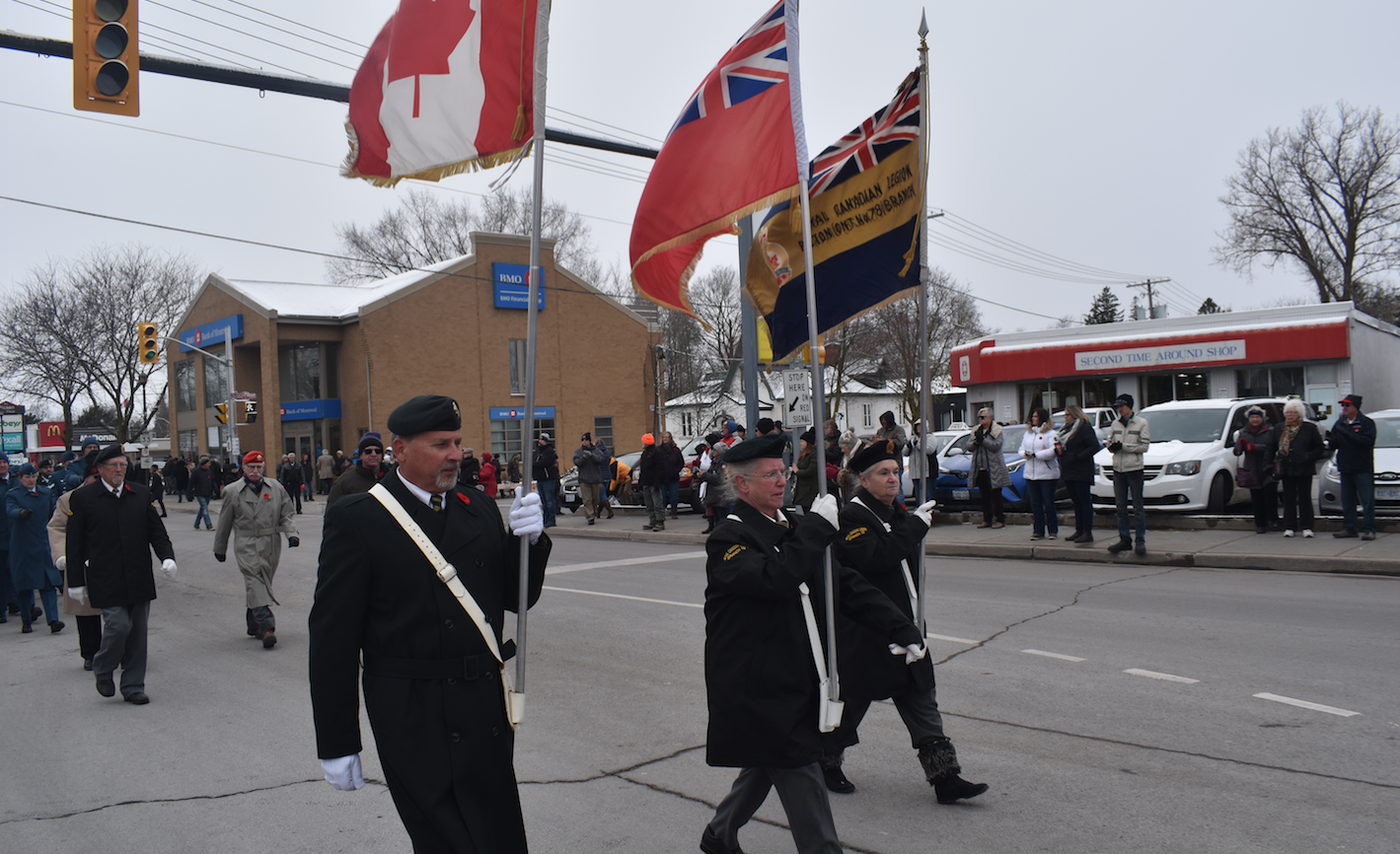 Visiting the ceremony from CFB Kingston was Master Corporal Ken MacPherson, along with his wife and children.

“We do this every year to remember our family members who have been apart of it (war) and other people who’ve served in past wars, currently serving members etc. It’s a pretty good turnout, I’m not surprised by it. The legion here does a good job,” enthused MacPherson.

Wellington Remembrance Day ceremony was bitter cold on Main St at Memorial Park beside Wellington United Church with wind coming in off Lake Ontario, but adverse conditions didn’t stop the close to 80 people from coming and showing their respects to the soldiers who fought and gave their lives so Canadians could enjoy freedom.

Andrew McLuhan recalled the sacrifices and the horrors experienced by those brave souls so that future generations could live in peace.

“As I do every year, I take the time to gather and remember those who died in service, that their sacrifice would mean an eventual peace an better life for us; their lives given that we would live, horrors experienced and remembered so we would be spared,” said McLuhan. “On a day like today, cold and grey by the lakeshore in Wellington, I take the better part of an hour to reflect on the beauty in my life, and to be grateful for the sacrifices of others which made it possible. I hope and pray our children never have to witness the horrors of war and that world leaders have the wisdom and humility to do whatever it takes to avoid it at all costs.”