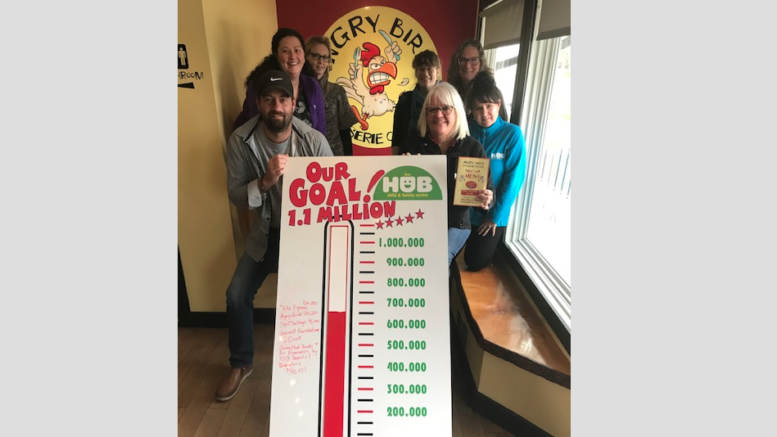 FOR THE KIDS - (left front) Micheal Hymus stood with staff from the HUB (back left to right) Mariann, Carrie, Natalie, Kim, Margie and Susan Quaiff as he presented the $40,500 to the HUB for the expansion. (Desirée Decoste/Gazette Staff)

A local business owner is supporting the proposed expansion of an early years centre in Picton in a big time way.

Michael Hymus of Angry Bird’s Rotisserie Chicken restaurant held a recent promotion called ‘Eat for Kids’ where 100 per cent of sales from meals went towards the HUB expansion project.

Hymus personally matched money raised through food sales at the restaurant for a total of $40,500 donated to the expansion which brought the HUB’s $1.1 million goal to $625,000.

“It’s great we have this champion for children in our community doing these types of things,” Susan Quaiff, Executive Director for the HUB child & family centre told The Gazette. “Sometimes children get lost in the shuffle as we have a majority senior population In Prince Edward County and we’re looking at building a hospital. Not that all those things aren’t important but building resources for children and families and wanting children and families to come to the community is really important.”

Currently the HUB offers a multitude of programs with some being hosted at satellite rental locations.

While some are close by to the HUB’s main base of operations McFarland Drive just north of the Hospital, those locations  are temporary and a more permanent space is required sooner rather then later.

Having the HUB in one main location will bring all of their administration to one location and will also bring back to Picton the parent education groups, parent play groups, parents groups or programming under one roof.

“We’re so excited and can hardly wait !” expressed Quaiff. “As we see more drawings and designs and we’re so lacking in space right now, we’re really looking forward to having these spaces back here. What we’re hoping is, we had a group we ran called the HUB Club with some school-aged children where they learned cooking, arts and science. We ran out of space to deliver them for the last little while so we hope to bring those back.”

Among spaces at the new planned site also include  a large multi purpose  room which can also be used by the community.

“We’ve been waiting for a site plan approval from the municipality and I understand it’s in front of them now,” Quaiff stated. “After speaking with the architect a couple of days ago he feels it’s best to wait until April before we break ground. From there it should be eight months so we are hoping to be all settled in there by Christmas next year.”

The HUB will be promoting ongoing fundraising to try and reduce the amount they may need to borrow in the end to finish the project, people can donate right through their website where they can also find information on the expansion and upcoming fundraisers.

The up and coming fundraiser for the expansion will be on Nov. 30 right at the HUB with arts and crafts primarily donated to them by parents or created by the little HUBSTERS throughout all the programs and a bake sale by the staff.

“We are looking forward to the upcoming fundraiser,” said Quaiff. “The staff are contributing to the bake sale piece, and we are a non-peanut friendly centre so we will have non-peanut products in our bake sale and the parents or the public can come and purchase them as well.”

Quaiff added how Hymus has been such a great supporter as he really wants programs and activities for children in the community and he also helped Quaiff on the splash pad that just opened up a couple years ago.

If you would like to donate to the expansion you can donate directly at the HUB or through their website at thehubcentre.ca/the-hub-expansion-project