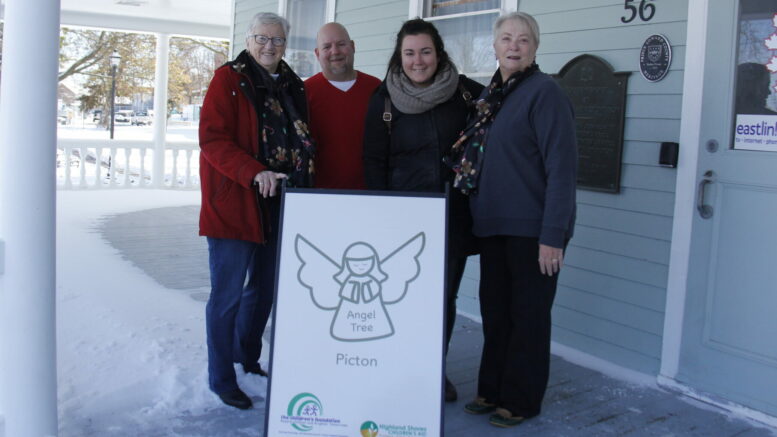 Angels from the Angel Tree Campaign have spread their wings once again as the child Christmas charity launched their campaign for the 2019 Christmas season on Tuesday.

Governed by The Children’s Foundation, an arm of Highland Shores Children’s Aid, the campaign, which has been running for three decades, helps about 300 local families who are unable to afford Christmas on their own.

Almost every year since the campaigns inception in the early 1980’s, the angel behind the Angel Tree Campaign, Susan Rose,  has  poured her heart and soul into making sure every child has a very merry Christmas in Prince Edward County.

“This year we are missing a few of our knitters (who would make slippers and other woollen materials) as they passed away and I always have that emotional connection with any and all of them,” Rose told The Gazette. “But then we pick up other volunteers who have just moved here and it’s absolutely fantastic. We also work in unison with the food banks and the Salvation Army so we can cross reference and make sure there is no duplications.”

This campaign serves to illustrate how tight times can be for families struggling to get by in Prince Edward County.

“This program has been going on for 30 plus years so it’s very well known,” expressed Kate Anderson, Special Events & Marketing Coordinator with TCF. “And of course we just try and help more and more families every year.”

Donating to the campaign doesn’t mean taking on a whole family or a child as donors can help out with a cash donation, single children’s gifts/toys, winter wear or non-perishable food items which are accepted at the campaign office by Angel Tree volunteers who then purchase toys and goods and distribute them appropriately amongst the remaining angels that have yet to be selected from the tree.

“All donations we receive are either from individuals, organizations or service clubs who are already either directly in Picton or within Prince Edward County, and, because this program has been going on for so long, it’s been hitting generations,” stated Anderson. “So lets say if someones grandmother use to donate and has now passed away, well now her son or daughter donates on her behalf, or there’s new clubs coming into the County as business is growing and they hear about this campaign as it’s one of the biggest programs at Christmas time in the County and want to donate and get involved, whether that be with a cash donation or people donate items like toys and different stuff like that.”

The campaign office which is located at Kinsmen Hall in Benson Park, is currently open 10 a.m. to 3 p.m. Monday to Friday, but  operating hours will be extended as Christmas draws near.

Prince Edward Colleigate Institute students come out every year to pick angels off the tree and help with things such as set up and delivery days. Delivery date is scheduled for Dec. 19th.

“We have a lot of really good high school volunteers who come in and help for the delivery days and with set up,” expressed Anderson. “The Kinsmen and Kinette clubs of Picton also help a lot as they let us host and they help with delivery day as well. So this campaign already has a really good base of people who’ve been involved so when new people see it and see the amount of involvement, it makes them want to get involved. And of course it’s supporting something local for families.”

Applications for Angel Tree are available through The Children’s Foundation website and at their office. They are also available at a few other locations around town, The Hub, Community Living and directly at the campaign office in Kinsmen Hall.