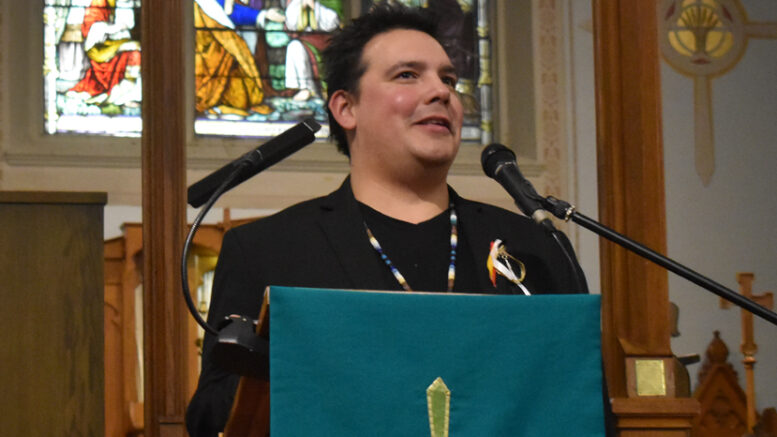 Dr. Niigaan Sinclair, an Indigenous writer, educator, advocate and columnist for the Winnipeg Free Press spoke to a wrapt audience of close to 200 at St. Mary Magdalene Church on Tuesday night.

The event was hosted by the Prince Edward County Public Library in hopes of beginning a broader exploration of Sir John A. Macdonald’s legacy, given the imminent resurrection of his familiar statue to be placed in the library forecourt by month’s end.

One couldn’t erase the legacy of Sir John A. MacDonald, from railways to the Indian Act as Canadian’s first prime minister has made an indelible mark on this country. Since at least the time of confederation, Canadians have been lauding the efforts of Macdonald to unify and, in effect, create what we know as Canada.

But within recent memory the acts perpetrated by Canada’s first Prime Minister become a wider topic of conversation for those who did not experience the direct effects of Macdonald’s draconian policies.

In this context, the preponderance of statues and other monuments honouring Macdonald has become a dubious challenge.

Sinclair was introduced by Councillor Kate MacNaughton, who gracefully bowed out of a Regular Council Meeting to attend this event.

“It’s my honour to be here tonight to deliver the land acknowledgment,” she said. “But at the same time, I want to acknowledge that it has its limits. The County’s statement is very general and if we aren’t watchful, we risk letting it lapse into irrelevance. The meaning behind the land statement doesn’t actually end at the period of the last sentence of the statement. I want it to be relevant and I think a lot of us share that same desire,” MacNaughton said.

“Sinclair does a lot of heavy-lifting, going places other people don’t want to tread, for fear. So they step back to the side and hope someone else will pick up the mantle. Sinclair has done that. As we enter and engage in conversation tonight, I hope there will be another 200 people, perhaps, who will pick up that mantle and have those conversations as we move forward,” stated Maracle.

Sinclair hails from Treaty One Territory in Manitoba and, as he points out, there is not one monument honouring indigenous peoples in the Manitoba Legislature, despite statues for various ethnic groups such as the Ukrainians who immigrated and settled in the province known as the gateway to Canada’s west.

Though the topic of discussion on Tuesday evening may have been provoked by a statue of Macdonald, it varied in scope from the legacy of mistreatment of Indigenous Peoples to the inherited burden of dealing with that legacy and the need for reconciliation.

In his talk, Sinclair pointed to another Canadian municipality that was grappling with the figurative shadow cast by their own statue of Macdonald.

“This past year, the city of Victoria had a conversation. That was, what do we do with the statue sitting on the front of our steps at City Hall? Victoria is, like many cities, in a difficult position when talking about history,” Sinclair said.

As Sinclair noted, Victoria, like Vancouver, is on stolen land. Unlike areas further to the east, much of British Columbia is entirely unceeded territory.

“The city of Victoria is in that complex relationship. What do we do with this history we have inherited together? These public debates are difficult,” conceded Sinclair. “How do we talk about memorialization? Even the intent behind the act of memorializing really says everything about the people who are doing the monumentalizing.”

Who is honoured in your community wondered Sinclair. Then, asking who has benefited the most, historically, from being in the area, Sinclair urged the audience to ask themselves who had been left out of “the equation”.

“What stories are missing?” he asked. “Stories need to be told and now, do you see your community differently? Monuments are not just reminders of stories but they’re encouragements for all of us to tell more.”

Sinclair iterated that the removal of the statue in Victoria was the result of the dialogue that ensued from the city trying for years to have a relationship with the Indigenous Peoples of that land.

“The removal of a statue honouring Canada’s first prime minister from a city hall really isn’t about this story…it’s about far more,” he stated.

Sinclair was careful to provide a balanced account of Macdonald’s accomplishments and crimes, but argued the constant contextualizing of Macdonald softens the brutality of his treatment of Indigenous Peoples.

Sinclair’s position is that Macdonald’s accomplishments cannot undo the harm that has been done.

“I’m aware of his vision of the railway, of a united Canada which we have all inherited. I’m aware he was driven, unwavering, forceful and the prototypical dream of every Canadian. I know that he is the vision that Canadian’s want to imagine themselves as and that even in his death, as Wilfred Laurier said, he is the history of Canada itself,” noted Sinclair. “But here is where we get honest. I’m a bit tired of having to defend the merits of Macdonald, because the conversatoin goes as follows: he is a man of his time. He needs to be viewed in the context of the way people viewed the world at that time. We need to forgive him for his complicatedness.”

“Violence is violence is violence,” echoed Sinclair. “What I mean by that is Macdonald’s career, while remarkable and important and impactful, is defined by incredible brutal and draconian violence, particularly against Indigenous Peoples.

Furthermore, Sinclair notes that many of Macdonald’s contemporaries accused him of being too extreme.

Sinclair cites a list of Macdonald’s “accomplishments” that many may not know. They include: delivery of the residential school system, starving first nations until they acquiesced, negotiating treaties in bad faith, and ordering militia to kill first nations peoples.

“He is the primary perpetrator of genocide against Indigenous People, something that Prime Minister Justin Trudeau has acknowledged, recognized and accepted responsibility for. If the Prime Minister of of a country acknowledges genocide has occurred and the perpetrator is the man we’re speaking about tonight, it’s worth having a conversation and using the word itself.”

Besides starving and marginalzing Indigenous Peoples within an inch of their life, Macdonald’s residential school system grew out of the Nationaly Policy of Assimilation in 1883.

“When the school is on the reserve, the child lives with the parents,who are savages and they’re surrounded by savages,” as Macdonald is quoted saying to the House of Commons. “They’re simply a savage who can read and write.”

Given Macdonald’s extreme position with regard to indigenous peoples, Sinclair argues that Macdonald shared more in common with dictators than democratic leaders.

Furthermore, he argues that the policies and acts perpetrated by Macdonald were nothing short of genocide.

“Just because genocide happened over 150 years ago doesn’t mean it’s not genocide. There is no gold medal for the genocide olympics,” said Sinclair.

With the issues of murdered and missing Indigenous Women, the removal of children, child poverty rates and Indigenous incarceration rates, Sinclair argues that that genocide is ongoing.

He denies the notion that Macdonald’s legacy will be erased, citing ways in which that is a tragically ill-informed notion.

“His history will not ever be removed. It’s cemented and if it’s not cemented in the rail line, it’s cemented in the imprint of every single Indigenous Person in this country. Our lives are not defined by that but they have been impacted in incredible ways by Sir John A. It is impossible to make the argument that Macdonald will be erased becasue we decide to remove a monument or two,” he added.

Citing the removal of the Macdonald statue from the Victoria City Hall, Sinclair stated that move was more about the future and less about the statue.

In the case with Victoria, the removal of the Macdonald statue was an effort to be serious about reonciliation, by creating a safe space for Indigenous Peoples that reflects less of a colonial legacy and more of the presence of Indigenous Peoples.

After the presentation, Sinclair took a few moments to speak with the Gazette.

When asked if the statue has potential to open up meaningful dialogue about the broader legacy of Macdonald, instead of just glorifying him, Sinclair responded that this would be possible if all those impacted by the statue being present were involved with it’s reinstatement.

“If all peoples are impacted, including Indigenous Peoples in particular, had a conversation about what the staging of the monument looked like. I am not of the position that the monument needs to be destroyed or tossed away,” said Sinclair. “It simply needs to be respositioned and put in a way that people feel safe around it. Because they don’t feel safe now, and I know from the mere fact that I just had a group of probably a dozen people all agree, most of them not Indigenous, saying they don’t feel safe with that statue around because it is a reminder of the perpetrator of genocide.”

The statue, said Sinclair, needs to be defined by other things.

“My entire work with teachers across the country is begging, ‘Who are we holding up by showing this statue to children?’ That, therefore, involves renaming schools, repositioning statues, and recontextualizing. That’s what museums do all the time,” stated Sinclair.

Furthermore, Sinclair argued it is up to us to recontextualize Macdonald’s actions within a broader historical context for the sake of future generations.