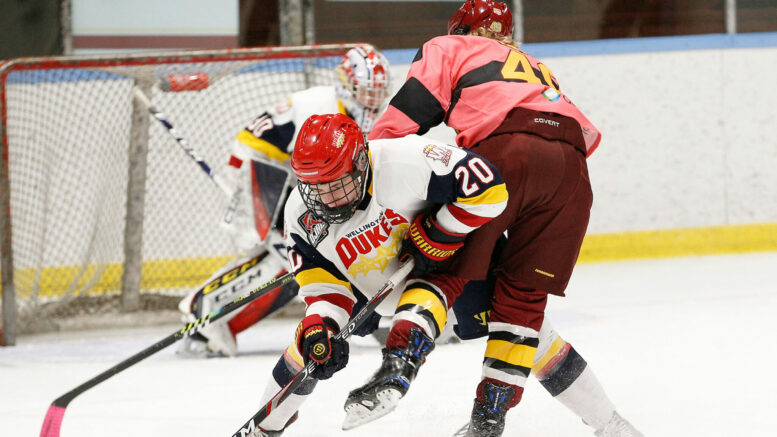 Wins over Lindsay, Brampton have club closing in on first overall in the OJHL

Workman like is probably the best way to describe the play of the Wellington Dukes this weekend as they grabbed a pair of road victories and moved in closer to the top spot in the Ontario Junior Hockey League.

Playing a rare Friday night away from home, Wellington got out to a 3-0 lead and outpaced the host Lindsay Muskies 4-1.

A night later, making visit to the venerable Brampton Memorial Arena to take on the host Admirals for their annual ‘Pink in the Rink’ cancer research fundraising event, the Dukes once again shot out to a 3-0 lead after a period and coasted to a 5-3 victory.

With the wins, Wellington improved their record to 21-3-2, good enough for 44 points and a tie with Trenton although the Dukes have three games in hand over their rivals.

The Golden Hawks actually did Wellington a favour on Friday night and knocked off the visiting Toronto Patriots who, even with the set back, are still shading the Dukes in terms of overall winning percentage in the OJHL .854 to Wellington’s .846. Toronto was riding a 12 game winning streak into Trenton Friday.

The Dukes now boast the league’s best run of games, having gone undefeated in a baker’s dozen’s contests dating back to 4-2 setback in Brantford Oct. 6.

“I thought we were really prepared and sharp to start the games and that’s always a big factor in any team’s success,” Wellington Head Coach Derek Smith told the Gazette Monday.

As mentioned, Wellington was flying right from the puck drop in both games.

In Lindsay, it was Ben Woodhouse doing a great job maintaining the zone and then finding Frank Vitucci with a drop pass for the Yardley, PA’s 17th of the season at the 3:03 mark.

Afforded a power play later in the period, Wellington’s Ben Evans unleashed a low point shot from the half wall that beat Lindsay netminder Ben Edwards to the five hole and just trickled across the Muskie goal line at 12:59. The Dukes continued to pour it on in the first Evans notched his second of the frame as defenceman Jacob Breckles fed the captain on a glorious one time effort at 17:04 to make it a three goal spread in favour of Wellington.

Wellington starter Matthew Dunsmoor wasn’t tested often in this game and the only puck to get past him in his 11th win of the season was a power play goal off the stick of Lindsay’s Tristan Roberts inside the final minute of play in the second period.

Wellington continued to grind in the third period and held the puck more often than not despite not pounding many past Edwards when the multitude of opportunities presented themselves.

Finally, Wellington got the capper in the late going as OJHL leading goal scorer got in the act.

The tally off the stick of Jake Gagnon- his 24th in 26 games so far this season- typified the kind of night it was for both clubs.

Brandon Brazeau made a nice play at the Lindsay line to intercept a pass and start a partial breakaway which Edwards stopped with a nice pad save.

In the same possession, Evans unloaded a one timer that just missed being a hat trick goal.

Finally, like a cat with a mouse on a string, Wellington struck was Gagnon cruised to the top of the circles and whipped a low screened shot past Edwards and into the Lindsay net at 15:12, making it a 4-1 final.

The following evening in Brampton, the ice was barely dry from the pre game flood before the Dukes had amassed a three goal outburst.

It was the third straight game in which Wellington would count for three goals in the first and if there’s a more sure fire way to set up a hockey game in your favour than leading by a field goal after one period, it has yet to be invented.

“It’s just a matter of being focused and ready to start the game on time,” Smith said. “We want to be consistent in all aspects of our game and starting well is part of that.”

Brett Humberstone did a great job picking the puck off the boards and delivering to the Brampton net in the first shift of the game.

Admirals netminder Travis Smith made the first two stops but Daniel Panetta swatted home a rebound just 42 seconds into the contest to stake the Dukes to a 1-0 lead.

That margin was increased just over three minutes later as Wellington took advantage of their first man advantage sequence of the evening.

Off the rush, it was Gagnon finding a hard charging Dylan Massie on the door step at 3:30 to make it 2-0 Dukes.

Despite a time out by the Admirals, Wellington continued the frantic pace and Brampton was loath to stop the Dukes early on.

Puck carrier Panetta would gain the zone and wound up falling in the corner which allowed Dawson Ellis to grab a loose puck and spot Ben Addison lurking at the far side of the Admirals zone.

Addison would rip a wrist shot past Smith at 4:42 to finish off a ‘three goals in under five minutes’ eruption from the visitors.

Wellington would bomb the Brampton net at will, sending 25 shots that Smith was tasked to deal with.

Up 3-0 after one, Wellington added to the lead in the second.

Former Navan Grad Brian Bygrave potted his first as a Duke with a nice slap shot just inside the blue line to make it 4-0 Wellington.

Massie’s second of the contest as he roared in off the half wall at 5:31 made Wellington’s lead a handful.

The Admirals would finally solve Matt Keeley at 7:18 of the second to get the hosts on the board and a pair of Brampton goals in the third as the Dukes were trying to get out of the building with their health and two points helped make the score flattering for the hosts but 46 shots on net for Wellington after 40 minutes of play tells even the most casual hockey fan how titled the ice was in favour of the locals.

“We kind of took our foot off the gas at the end when it was 5-1 but, for the most part, we stuck with it and made sure we were coming back to Wellington with the two points,” Smith said.

While the points were key, a nice and hopefully continuing development in Wellington’s play this weekend was its discipline.

The Dukes took 29 minutes in penalties on Friday night and just six minutes on Saturday night.

For the OJHL’s leader in penalty minutes, that’s the start of a promising trend.

“We know if we want to be successful this season we need to stay disciplined and the players are buying in,” Smith said. “They are young men and this can be an emotional game but I really think they are turning a corner and are understanding the message that we need to stay out of the box. If they are frustrated over something that happens or a non-call, they have to just suck it up and move on. I thought we were a lot better in doing that Friday and Saturday.”

It’s an incredibly rare back-to-back home stand for Wellington this weekend as they host the Pickering Panthers on Thursday night and then get set to welcome the Whitby Fury on Friday night.

After sitting idle on Saturday, Wellington travels to North York to take on the Rangers on Sunday afternoon.

LEDES AT LEHIGH: Wellington’s game against Pickering will mark the halfway point of the 2019-20 OJHL campaign and one would half to go back to the Marty Abrams era to find a Dukes team that had only suffered three regulation setbacks over the first half of the regular season…Forward Evan Miller is working hard to get back into the lineup after suffering a high ankle sprain in the fifth game of the season. Hopes are still high he could return to the lineup in December…Speaking of Abrams, his Navan Grads are 4-2-0 to start the month of November and former Wellington Duke Jackson Arcan was named CCM Central Canada Hockey League Player of the week last week.