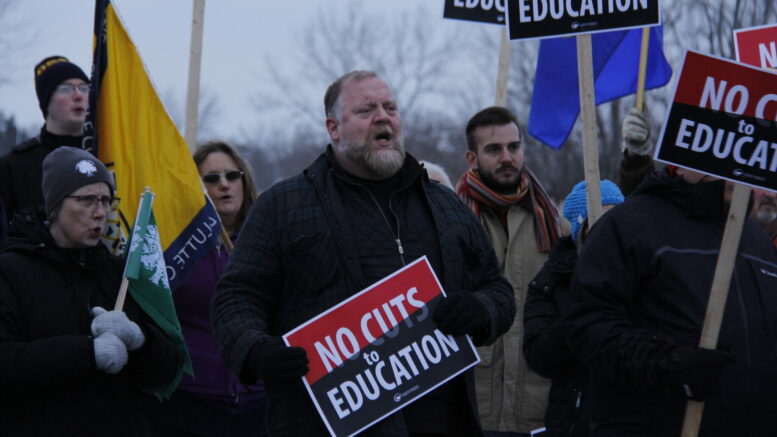 SPEAKING OUT - A supportive protester chanted "shame" and "boo" at Thursday afternoon's rally in front of Bay of Quinte MPP Todd Smith's office. The peaceful demonstration attracted around 70 people concerned over cuts being made in the public school system. (Desirée Decoste/Gazette Staff)

A rally to protest cuts to public education by the Government of Ontario brought nearly 70 people to Bay of Quinte MPP Todd Smiths office in Rossmore on a blustery and frigid Thursday afternoon and perhaps the only thing colder than the weather was the contract negotiations between their unions and the province.

Supporters paraded with placards in hand, respectfully walking the edge of the lot as to not disrupt traffic although passing traffic showed support by honking as they drove along Highway 62.

Dave Henderson, Local President of ETFO Hastings-Prince Edward welcomed everyone to what he believes will be a series of wintery rallies. Henderson said ETFO demonstrators have dealt with torrential rain, gale force winds, snow and ice in the past but reassured everyone the union group were present  Thursday because the issues facing public education are important.

“A few weeks ago we, ETFO, had a record turn out for our local meeting on the central strike vote,” Henderson expressed to the crowd. “The vote was 98 per cent in favour of strike action if necessary. Starting Nov. 26 ETFO members will be engaged in legal strike action with our start of our work-to-rule.”

Their goal is to turn up the heat on Ontario Premier Doug Ford, Minister of Education Stephen Lecce, Smith and others in the Ontario legislature to get the government to come to the table with serious proposals to address the real issues of concern.

“Class sizes are too large, special needs student have none of the necessary supports they need for success, the protection of the kindergarten program is important to EFTO and we have to do something to address the growing violence in our classrooms,” declared Henderson. “Our job action in designed to have the least amount of impact on students and parents because we know parents are on our side and are opposed to the governments cuts and we intend to keep them on our side.”

When asked what items the public might not fully know, Henderson spoke on violence in the schools.

“I don’t think the public has a full appreciation of the levels of violence in the schools, and it’s not being recognized,” said Henderson. “The previous government brought in legislation to deal with it but I don’t feel like school boards are equipped to handle it and I feel like the whole issue is being swept under the carpet. If it’s not dealt with public education is in real danger because people are going to check out of it and find alternatives.”

Scott Marshall, president of local OSSTF District 29, spoke to The Gazette on how much it means to have solidarity between the two unions. “What’s at stake is the strength of our public school system and its abilities to meet the needs of all students,” said Marshall. “Both the elementary and the secondary teachers are part of that team that works to support students.”

Speaking to the crowd about how OSSTF tried to get ahead to prevent what’s unfolding, Marshall expressed how when they met with MPP Smith at his office in the spring, education union leaders were told the government would look for efficiency but there would be no threats to front line workers.

Marshall said Smith’s government then went on to impose education funding formula changes that would cut 10,000 teaching jobs which, in turn, took 60,000 student courses in the province which is 60 teachers and 360 courses gone from seven high schools in the Hastings and Prince Edward area.

Marshall also spoke on how the province is holding firm on some issues which are going to have a negative impact on students.

“For the secondary teachers it’s about losing a massive number of teachers. When they go out of the building so do the courses they teach and the choices students have. It’s inevitable that class sizes will go through the roof because you have the same number of students and far fewer teachers,” Marshall explained.

There is also a lot of concern towards the e-learning model which has been offered to provide flexibility in unique situations and is not a one-size-fits-all model.

“The experiences with e-learning have been that a lot of students aren’t successful with it so there is a lot of concern around that,” stated Marshall. “And I don’t think the governments proposal to let some students opt out is the right way to get at it. Our proposal is sensible, it’s ‘lets put it on hold, study the research, look at the evidence’ and then decide where we proceed from there.”

Speaking to The Gazette, Marshall touched on the OSSTF’s salary proposal.

“For salary we’re proposing cost of living. We believe it would permanently take negotiations about salary off the table into the future because if you establish salary just keeps up with inflation, nothing more nothing less, then you don’t need to talk about it again because it’s already imbedded into the contracts that are there. So that is, I think, a very reasonable proposal we have with regards to salary.”

In a statement to the Gazette, MPP Smith said the government remains committed to constructive bargaining with our education partners.

“We are focused on reaching the deals that Ontario students and families deserve, and keeping kids across the province in the classroom,” Smith said.

On Monday, OSSTF announced its members had joined with ETFO members and voted overwhelmingly to take a strike position.Central negotiations are expected to resume this week with Lecce requesting the groups enter mediation while provincial union leaders are stating there is ‘no deal in sight’.