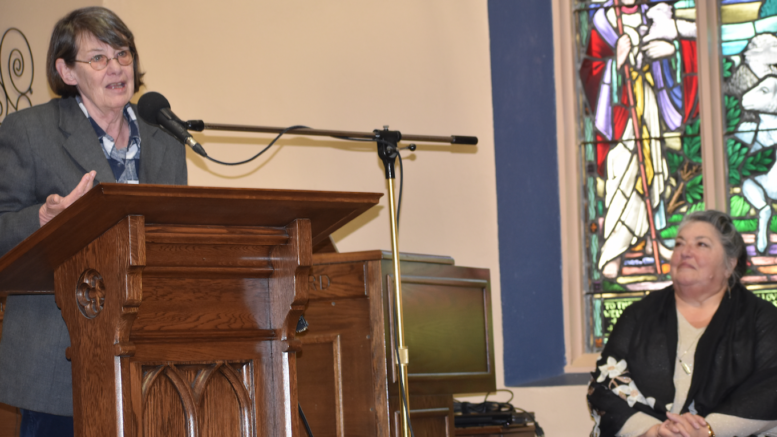 WORDS FROM MANY VOICES - Local author Janet Kellough presents her thoughts on Moon of the Crusted Snow by Waubgeshig Rice as organizer Karen Lewis looks on at the One Land, Many Voices presentation at Andrew's Presbyterian Church in Picton on Sunday. (Sarah Williams/Gazette Staff)

Canada is one land with many voices, and on Sunday, a collection of those voices were heard at St. Andrew’s Presbyterian Church in Picton.

The event, One Land Many Voices, brought a selection of local authors, educators and one social service worker together to speak on a variety of books written by Indigenous authors.

The books were selected by Karen Lewis, founder of the Kanhiote Public Library and the event was organized by both Lewis and Reverend Lynne Donovan.

In her opening speech, Donovan referenced the nature of reconciliation as discussed recently during the Dr. Niigaan Sinclair talk at St. Mary Magdalene Church.

Reconciliation, as Donovan cited, looks like an opportunity to have a conversation.

Lewis spoke to the crowd, urging them to consider her perspective on the literature presented as being just that-her perspective.

“Please do not think I’m an authority on Indigenous Canada or the Mohawk Nation or Mohawks of the Bay of Quinte. I’m just me-a Mohawk woman of a certain age who loves books, reading and learning. So, when I speak, it’s from my own understanding, however limited that may be,” stated Lewis.

Lewis notes that, in 1990 when she began her library, there was not the breadth of Indigenous Literature to choose from that exists today.

With the new Native Renaissance, a term coined by journalist Julian Brave NoiseCat, Canada is experiencing a marked resurgence of interest in both the political and literary stories brought forth by Native Peoples.

“In 1990, when I started with the library that didn’t exist yet, I had to be careful when choosing books. When I did find them I had to make sure they were unbiased and not stereotypical. That is not the case nowadays. There are many more authors being published and distributed widely,” she said. 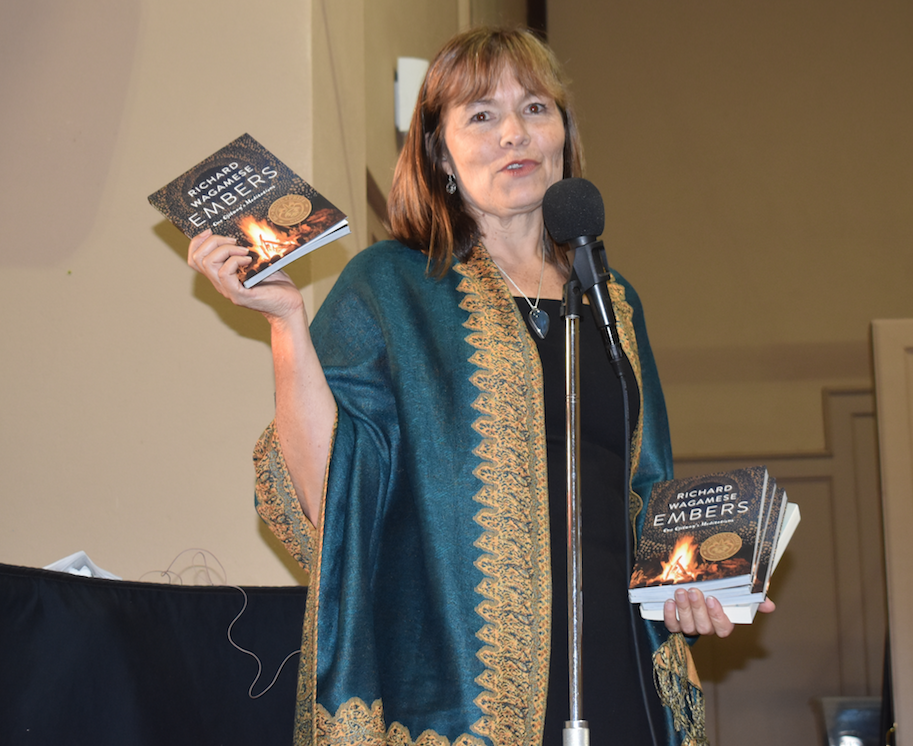 Lewis posited that the Oka Crisis of 1990 helped to raise awareness and interest. Awareness, she stated, that native peoples are still out there, along with interest in their stories.

Peggy Payne was the first reader of the group. She has worked in the education system for 33 years, both as a teacher and administrator in England, Australia and Canada. She also worked alongside the Indigenous Band at a fishing camp in Sioux Narrows in 1970.

Payne presented the novel He Who Dreams by Melanie Laurence, a Canadian author of Cree and Scottish heritage. Published by Orca Limelight, it is a high interest novel for teens who might be struggling with reading.

“The main character is a high school soccer star who signs up for Indigenous dance classes when he follows the drum beat in a community centre,” explains Payne. “The character’s name is John McCaffrey and he’s the older child in an Irish/Cree family. He inherited red hair from his Dad’s side while his sister looks more like their Mum.”

The story follows John as he navigates the murky territory of belonging and identity. Despite being part Cree, John’s Indigenous identity is repudiated, perhaps because of his red hair, when he attempts to join a men’s dancing circle.

“The one thing that surprised me reading this book about Indigenous People is how they are portrayed in this story as being so very hard on their own people. The stereotypes interfere…without getting to know whether someone is indigenous or not,” commented Payne.

The second book of note was Moccasin Square Gardens, a collection of short stories written by Richard Van Camp and presented by Peter Dunning.

Van Camp is a writer from the Dene First Nation in Fort Smith, N.W.T while Dunning is a social worker who has lived and worked in Canada’s far north, including the Yukon, Nunavut and the North West Territories.

He also worked with First Nations, Inuit and Metis on the development of services that respect self-determination and culture.

More recently, Dunning worked at the national level promoting children and families first, including the opportunity to advise on the new Indigenous Family and Children Services Act that will become law in 2020.

Having worked internationally, including the U.S and Sri Lanka, Peter now teaches in the Social Service Worker Program at Loyalist College.

“The first punch has to be real good,” started Dunning, reading a quote from the beginning of the book.

“I thought, that’s an interesting start. Knowing what I do about northern communities, they can be tough places to live and grow up in. So, that piece of maternal advice resonated with me,” he said.

Throughout the stories, which depict modern life in the far north, there is much going on, according to Dunning. 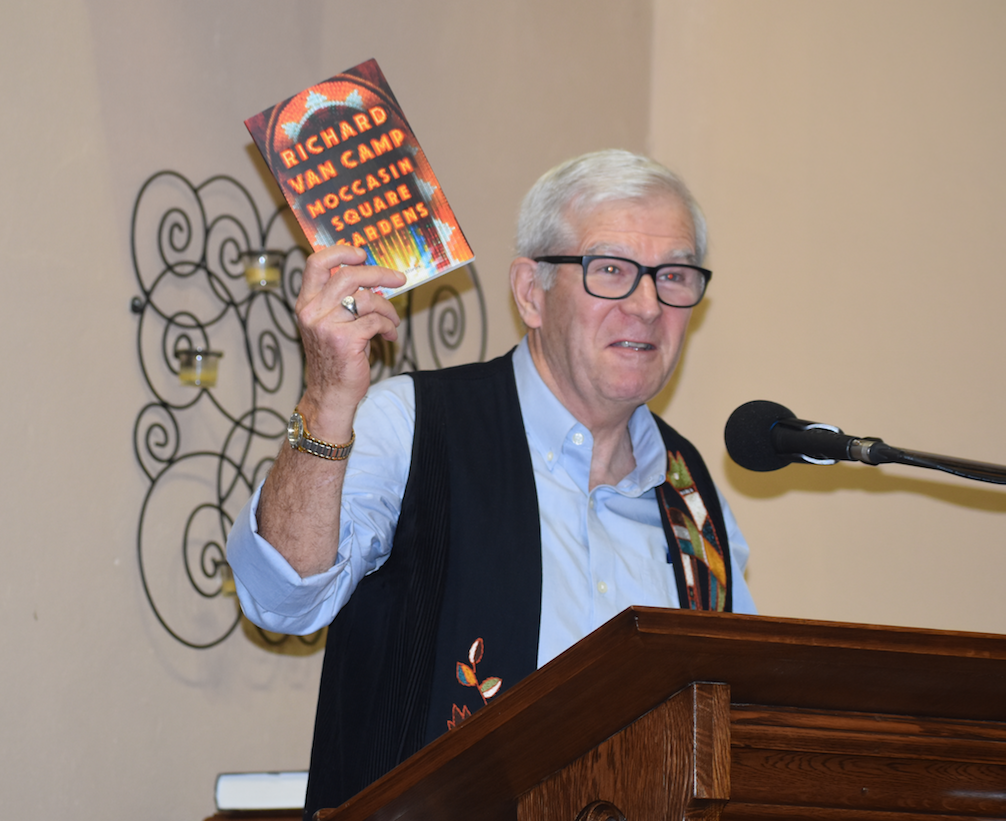 “There is lots of love, warmth and humanity within those families and communities. And, the imperative that they have to get along because that’s where they are…it’s a memorable book and the descriptions of things-from the band office, the Northern Store, and the hockey rink, all left me with such great feelings about life in a community like Fort Smith,” he concluded.

Andrew Binks was third to present, showcasing One Native Life by Richard Wagamese. Wagamese was an Ojibwe author and journalist from the Wabaseemoong Independent Nations in Northwestern Ontario.

Binks has worked across the country, from Quebec to Victoria. He is also the author of two novels, Strip and The Summer Between. Currently, Binks is teaching a writing workshop at the Picton Public Library.

“As a writer, I loved this book. It’s autobiographical, short vignettes of Wagamese’ life,” enthused Bink. “The poetry of his prose and style is magical..so beautiful, and yet, so clear and direct.”

The vignettes range from the author’s childhood to his adulthood, from abuse to alcoholism and his journey to reclaim his identity.

“I think this book needs to be read in the early morning. That is when Wagamese would write these essays, after he’d taken his dog for a walk and done a bit of meditation by a lake near Kamloops. You read it then, there’s nothing to distract you. He talks about the early morning light, the magic of the moon shadow, the stars,” said Binks, “and we’re all living out here quite close to nature, so I do recommend that you read it. Either first thing in the morning or right after you get up, because it is a magical time to read these short vignettes.”

Rice is an author and journalist originally from the Wasauksing First Nation.

Kellough has written seven novels, along with the Thaddeus’ Lewis Series, the fifth book of which was nominated for the Arthus Ellis Award in 2017.

“This book is being pitched as a thriller,” began Kellough. “There are certainly some very suspenseful elements to it. But, I think it falls a little more squarely into the category of speculative fiction. Although, it doesn’t really fit there either.”

The story is told through the eyes of Evan Whitesky and his partner who live on an Anishinaabe Reserve and details the stark reality of rural living.

“In the end, there’s a really poignant choice between wants and needs. In this way, I feel the book, in the best tradition of speculative fiction, actually has a lot to say about the priorities and entitlements of current society and how easily they can be stripped away,” said Kellough. “You can punch through crusted snow into nothing but powder, and if you want to get back out, sometimes you have to leave your boot behind.”

Last but not least, local educator Matt Sheahan presented the book This Place, 150 Years Retold featuring a smattering of stories from the likes of Niigaan Sinclair, Richard Van Camp, Sonny Assu and Brandon Mitchell, to name a few.

Sheahan is the Department Head of Arts and Indigenous Studies at Prince Edward Collegiate Institute. One of his areas of focus is giving Non-Indigenous educators the courage to tackle serious issues and themes around Indigenous education, literature and stories without cultural appropriation.

“As an educator, I’m always looking for stories that can engage and connect students. As an Indigenous education educator, I’m looking for different ways to activate my students’ awareness and understanding of our shared history as a treaty people,” stated Sheahan. “This book that was assigned gives me many different access points to work with students though a variety of issues, history and stories. I’m also a huge fan of graphic novels.”

The humanizing factor in these stories, stated Sheahan, enables the reader to develop empathy for people that may not have otherwise been possible. This, he adds, is extremely powerful.

Following the presentations and question period, Rev. Lynn Donovan presented Karen Lewis with a framed poster of a segment of Christi Belcourt’s Wisdom of the Universe-the mural adorning the rear wall of the Presbyterian Church.