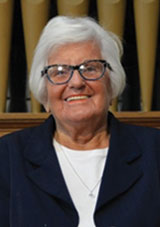 Gail (Gayle) Lois Collison, 84, returned to her heavenly home on November 14, 2019 after a courageous battle with cancer. Her devotion to family and friends and her unwavering belief in God supported her during her struggle and ultimately gave her peace. Gayle was born in Parry Sound. After spending her childhood and early adult life there, she moved south to the Barrie-Orillia area. During this phase of her life her group of friends expanded, her children grew into adults and she was an active member in various community events. Upon retirement, she and Dick moved to the picturesque community of Wellington on the shores of Lake Ontario. Here, Gayle became a dedicated and active parishioner at St. Mary Magdalene Anglican church in Picton. She also volunteered at the Second Time Around where she enjoyed friendships with the other volunteers as well as giving back to the community. Gayle is survived by her spouse Dick MacArthur; children Stewart and Angela; stepchildren Craig and Darryl; grandchildren Derek, Kristen, Jayda and Owen; and sister Iona. A Ceremony to honour her life will be held on Monday, November 25, 2019 at 10:30a.m. at the Ainsworth Funeral Home, 288 Noxon Avenue, Wellington. Reception to follow the service at St. Andrew’s Anglican Church, Wellington. Memorial Donations to the Prince Edward County Memorial Hospital Auxiliary would be gratefully appreciated by the family. Online donations and condolences at www.ainsworthfuneralhome.com