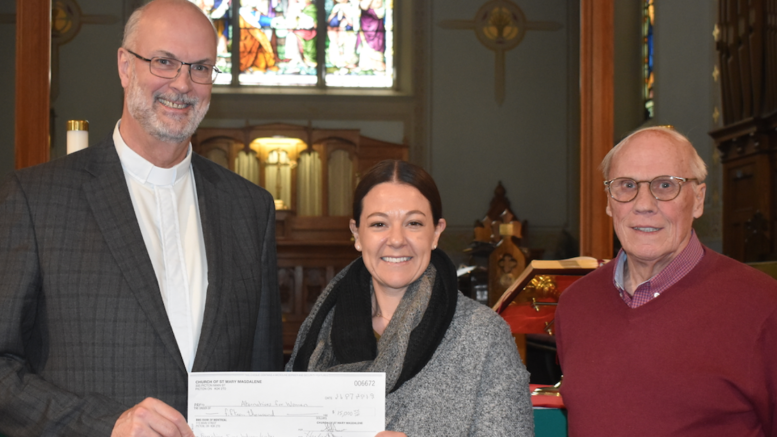 Alternatives for Women (AFW) will begin moving their offices into their newly renovated location, Vi’s House, this December.

Thanks to a generous donation from St. Mary Magdalene Church in Picton, they will now be able to furnish the five Transitional Second Stage Housing units and the Emergency Room.

The $15,000 donated from St. Mary Magdalene Church will allow adequate furnishings to be procured so that tenants may start moving in as early as January.

Due to the size of the units at Vi’s House, very specific furnishings are required to ensure the space is fully utilized.

“We thought to ourselves, whether or not the move-in dates can progress as planned is dependent on whether or not they can get them furnished in a timely manner. We thought ‘let’s just do it’. Then, it’s not just a hope or idea. It should be true that in January or soon after the rooms will be ready and people can move in,” stated Anglican Minister Charles Morris.

Morris explained that church warden Janet Howes had been instrumental in providing the women who AFW support with baskets of donated items,  through the Basketeer Program. It was Howes who brought the plight of Vi’s House to the congregation.

“Often, the women who seek help from AFW have left a bad situation with next to nothing, and often the things given to them-while fine-are clearly used. That just re-emphasizes the situation they find themselves in. So, to have new items from people who care while making that transition is a powerful thing” said Morris.

AFW stated in a recent press release that they are extremely grateful to St. Mary Magdalene’s Church, along with all of the other donors who have contributed to Vi’s House.

“We couldn’t have completed this very important project without the support of our community,” they said.

After a funding failure this past summer, the renovation of Vi’s House was halted and AFW set to raising $50,000 through GoFundMe, and various other campaigns, in order to complete the project.