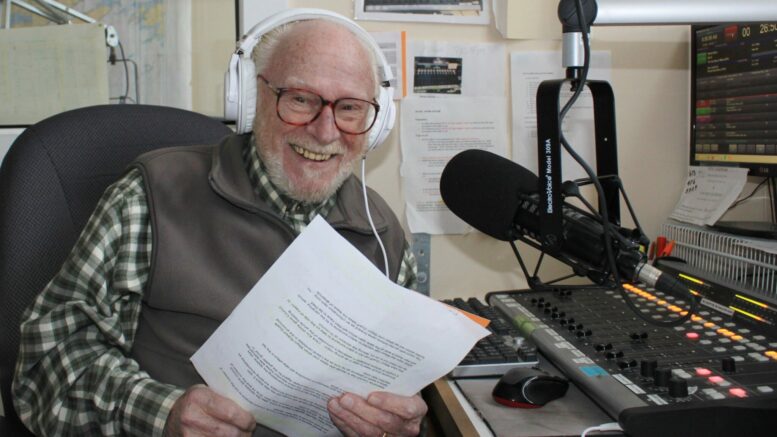 While the memories of his voice and legacy of his efforts will live on in the hearts of many, many Prince Edward County residents, the little guy with the warm smile in his voice has passed away.

John Mather, one of the founding fathers of 99.3 County FM and a dedicated volunteer to several local organizations and service groups, died at his home on West Mary St. Saturday.

Mather, a radio veteran who had a distinguished career on both sides of the border, was 80.

Former County FM Program Director JJ Johnson took to social media to pay tribute to Mather who hosted Music and Miscellany for 208 Sundays and was the station’s first news director-among a host of other unrecognized duties at the fledgling station.

“He helped so many organizations and did it with a mighty smile, a ‘dig-in’ attitude and a sincere sense of conviction. He was all about making things better. That was just who he was,” Johnson said.

In addition to helping get County 99.3 FM off the ground and into the airwaves over Prince Edward County, Mather spent time supporting and assisting organizations such as Community Care for Seniors, The Food Bank, the Loyalist Humane Society, Picton United Church and the Prince Edward County Memorial Hospital Auxiliary just to name a few.

Radio host Terry Culbert had taken to periodically hosting Mather’s Sunday morning mainstay ‘Music and Miscellany’ and told the Gazette that whenever Mather was awake and feeling up to it, he would call the station to give a weather report from West Mary St. in Picton as well as share a joke and and a laugh.

On this past Sunday, Culbert was contacted by Johnson and given the tough news that the community radio pioneer and consummate broadcasting professional had passed a day prior.

“JJ gave me the option of passing along the news to our listeners and I wasn’t sure I could do it at first,” Culbert said.

After some thought, the radio host did break the news of Mather’s passing and what followed was an outpouring of phone calls to the studio where listeners shared stories with Culbert.

“He had a heck of a following here in Prince Edward County and beyond  and it was an honour to be there and to share in the wonderful memories,” Culbert added.

While both Colbert and Mather attended Medway High School in London, ON at the same time in the 1950’s although the pair didn’t become acquainted with one another until much later in life.

“John knew I was a part of the community radio station on Amherst Island at the time things were starting here for County FM and he invited me to speak at the first AGM the group had. I really look that request as part of the reason why we ended up coming to Prince Edward County and getting involved with the station,” Culbert added.

At the close of Music and Miscellany in October, 2018, Mather recalled those early days of getting the application organized that would grant a CRTC license for a community station in Prince Edward County and the radio broadcasting veteran thought a local community voice was needed here.

“I had just lost my wife Elaine in September and I had always kept busy being involved with the food bank, hospital auxiliary and the arts council but what really kept me busy during that time was filling out application forms for the CRTC,” Mather said with a laugh. “It made me feel good because we were able to bring about something the County really needed.”

The greatly diversified station has drawn praise from many for it’s unique and never tiring sound. At the time, Mather looked back on the first four years of the station and said County 99.3 truly is a miracle realized.

“It’s been a lot of work with great number of volunteers and most are still with us today. The volunteer involvement and dedication has been out of this world,” Mather said. “Music and Miscellany and getting the station up and off the ground really filled up a void in my life and I felt if I have something to give that makes people happy and feel good then I’m going to give it.”