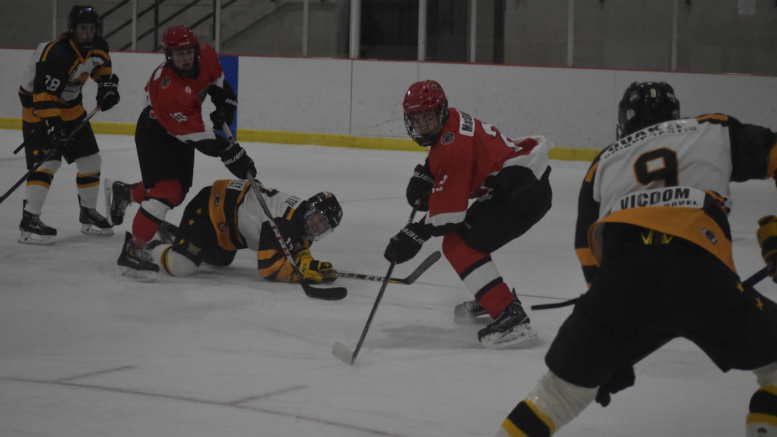 One of the youngest teams in the Provincial Junior Hockey League learned a tough pair of lessons this weekend.

Not burying your chances when they are presented coupled with making a mistake against experienced hockey clubs is almost certain to lead to an expanding number in the loss column.

The Picton Pirates were dealt a set of setbacks this weekend, dropping a tough 6-3 decision in Napanee to the defending Schmalz Cup champion Raiders before wasting a wonderful netminding performance from a familiar face at home on Saturday in a 3-1 loss to visiting Uxbridge.

In both contests, one couldn’t possibly fault Picton’s effort. This a young squad that brought maximum effort in back-to-back outings. 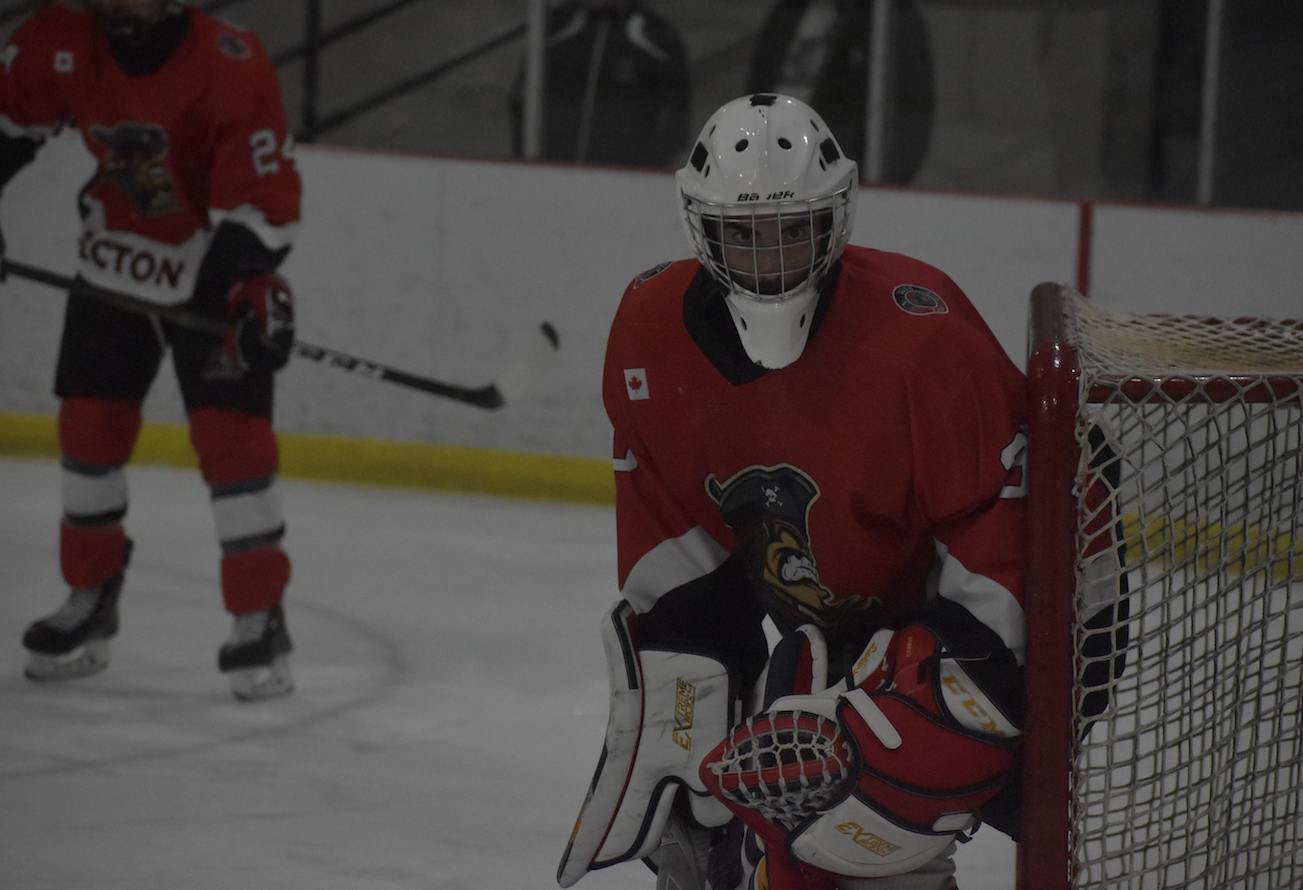 But Picton could look at least half a dozen missed opportunities on Friday night as the main culprit as to why they couldn’t escape the Strathcona  Paper Centre with a better result.

On Saturday it was more of the same as the older Bruins were able to score a goal midway through the third period off a one timer that broke a 1-1 deadlock and effectively sunk the Pirates and their fortunes at Huff Estates Arena.

“That was the difference in the game,” Green told the Gazette Monday. “The Bruins buried their chances and we left a lot of open pucks in the house. I was really happy with the work ethic and we are steadily generating more chances every game but we just couldn’t finish.”

The Pirates would score the opening goal in the first as captain Will Harrison set up Griffen Conger at 6:48.

The marker gave each player their 24th point of the season which keeps them tied atop the Picton scoring parade.

Unfortunately for Picton, that lead lasted exactly 15 seconds and Josh Cammalleri took a Toby Cooper feed and Uxbridge’s top sniper tied the game back up at the 7:03 mark.

Picton would outshoot the Bruins 14-6 in the first as Uxbridge was held in by netminder Cam Smith.

Both teams would get a pair of power plays in the second but neither team could find the range. 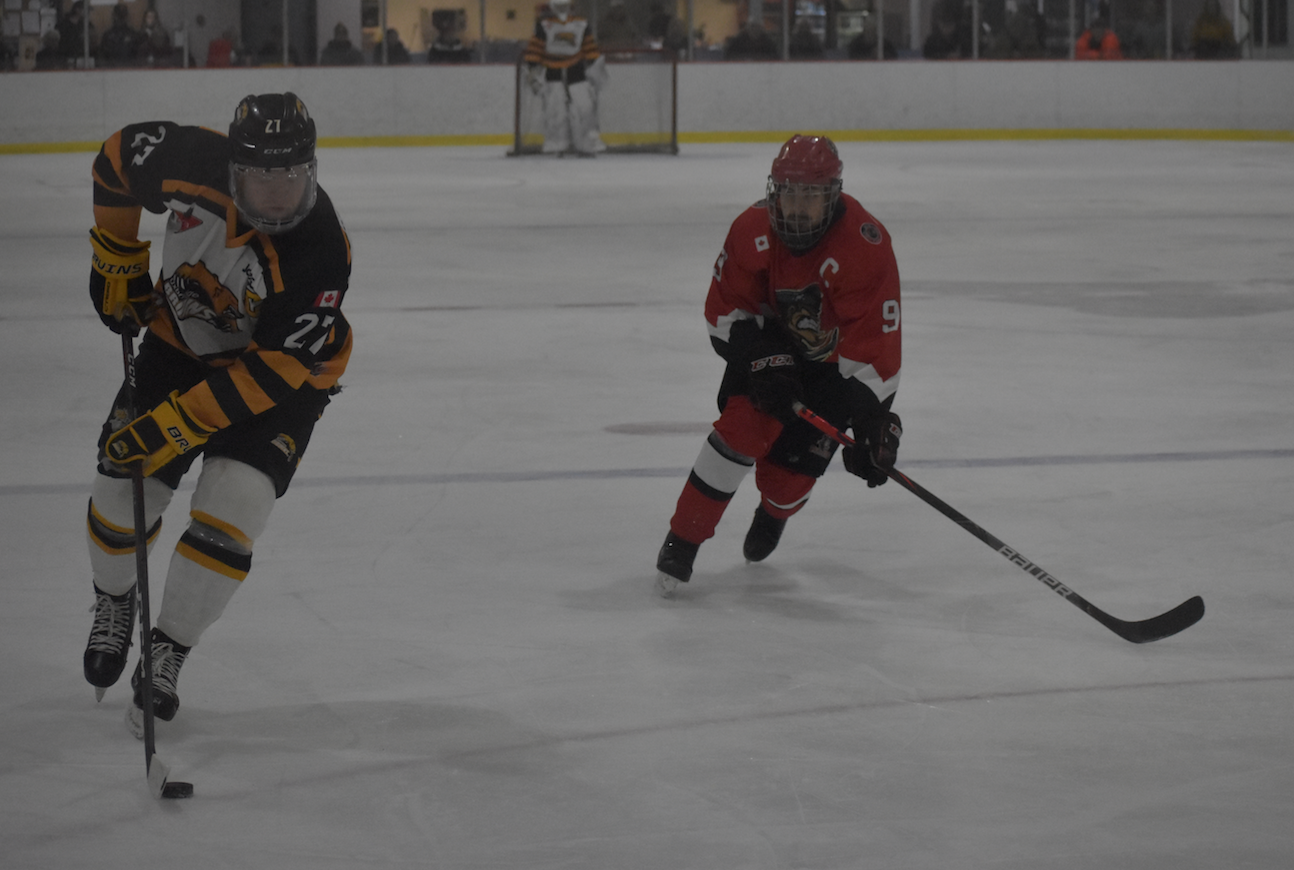 In the third, Picton would get a pair of good scoring opportunities on Smith but the Bruins netminder said no.

In the Picton net, Woodlawn, ON native Kyle Renaud was making his first start of the season and was spectacular stopping 31 shots.

Cammalleri beat Renaud a second time, this effort coming off a bar down one timer again from Cooper at 9:16 of the third as a missed assignment would come back to haunt Picton.

Despite wondering the hockey wilderness for a couple of months in search of a Jr. A position, Green said Renaud was outstanding Saturday and it was great to see last season’s playoff hero back in a Pirates uniform.

“Renny showed up ready to play and I know on the bench the guys were really pressing to get that equalizer for him,” Green said.

But in the Bruins net, the 16-year0ld 6’3” Stoufville, ON native was equal to the task, stopping 32 Picton shots including all nine the Pirates mustered in the third period.

With time winding down and Renaud out of the net, Cooper would send the puck into a yawning Picton cage with eight seconds left to make it a 3-1 final.

On Friday, Picton played with the host Napanee Raiders for good portion of the contest but just couldn’t outlast the Tod division leaders.

“Napanee is a different animal and anytime you make a mistake, it’s always magnified, Green said. “That was the difference in that game.”

Aiden McFarland would beat Picton’s Eric Tessier 1:25 in to give the Raiders a hot start but Picton would battle back at the midway point of the frame.

Working on a power play, Picton’s Dawson Lindsay would find fellow rookie Nick Kirby Palliser for a goal at 9:39.

But former Wellington Duke Justynn Steven would convert an Aiden McFarland feed with under two minutes left to send the hosts to the dressing room with a 2-1 lead.

The assist was the first of three helpers the former OHLer would rack up on the night.

Pirates pivot Garrison Moore would count for his second of the season at the 4:12 mark to tie up the contest once again but the Raiders would once again charge ahead thanks to Steven and fellow Dukes alumnus Evan Foley.

After just missing an open net, Foley was sprung on a breakaway by Liam Mroueh at 9:15 and the Port Hope, ON native made no mistake slipping the puck past Tessier.

Steven’s goal just over two minutes later made it 4-2 for the Raiders and would stand up as the eventual game winning tally.

Picton would cash in a second time on the power play later in the frame as Kurtis Wood set up Jack Dow at 17:30 to bring the locals to within a goal.

Picton has a light week this week, hosting Campbellford on Thursday night in the local’s lone action this weekend.

Picton is best not overlook the Rebels who picked up their first win of the season, dumping the Georgina Ice Saturday night.

In the Rebels net is almost sure to be a familiar face in Brennan Bush as the Tweed, ON native was dealt to the Rebels organization when Renaud returned to the Pirate ship late last week.

Green was well aware the Rebels will come into Thursday’s contest with something they haven’t had in a while.

“We need a performance out of our players for sure,” Green said. “I’m sure if Bushie draws the starting assignment he will be ready to go against his former team. We will need to make sure we bury those chances when they present themselves.”