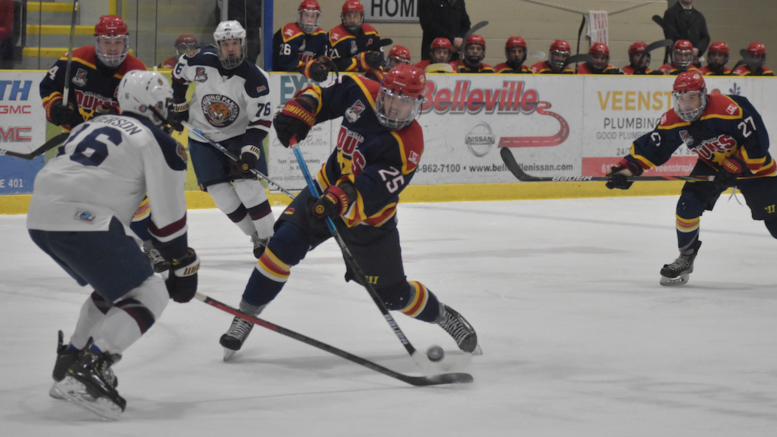 The Wellington Dukes had a successful weekend, winning all three of their games and running their unbeaten streak to 16 games.

Wellington (24-3-2) fairly eclipsed the Toronto Patriots and pushed their winning percentage to a gaudy .862.

The Pats, who had originally been ahead of the Dukes and previously led the Jr. A loop in terms of winning percentage, have cooled off and are 2-2 in their last four games.With Wellington overtaking Toronto in the standings, the observers that tabulate the Canadian Junior Hockey League’s weekly top 20 national rankings saw fit to peg the Dukes seventh overall.

With 50 points, the Dukes are four points ahead of the second place Trenton Golden Hawks and have a game in hand on their rivals.

Wellington’s unbeaten streak was added to on Sunday in North York as the locals beat up on the host Rangers 7-2.

The Dukes opened the scoring early as a hard driving Dawson Ellis was fouled taking the puck to the net and rookie Barret Joynt smartly followed up the play and put the puck into a yawning North York cage at 6:51 of the first.

That lead was doubled just a couple of shifts later as Ryan Smith burst to the Rangers net off the rush from the half wall and picked a hole on North York starter James Gray at 8:34.

Up 2-0, Wellington was unrelenting in the first half of the second period and effectively crushed their opponent’s will.

Wellington would benefit from a poor clearing attempt as Smith tapped home his second of the game at 2:13 of the second.

Just under two minutes later, Ben Woodhouse, coming off a hat trick effort in Friday’s win, would get his second helper of the frame, springing Frank Vitucci for a nice scoring rush at 4:03.

Gray, who was spilled on the Vitucci goal, was victimized just 33 seconds later as Jacob Breckles joined the rush and tucked home a back hand effort at the lip of the crease to make it 5-0.

Rangers bench boss Geoff Schomoygi lifted Gray for Eli Schiller but it wouldn’t have mattered who was tending net for North York on Wellington’s sixth of the afternoon. 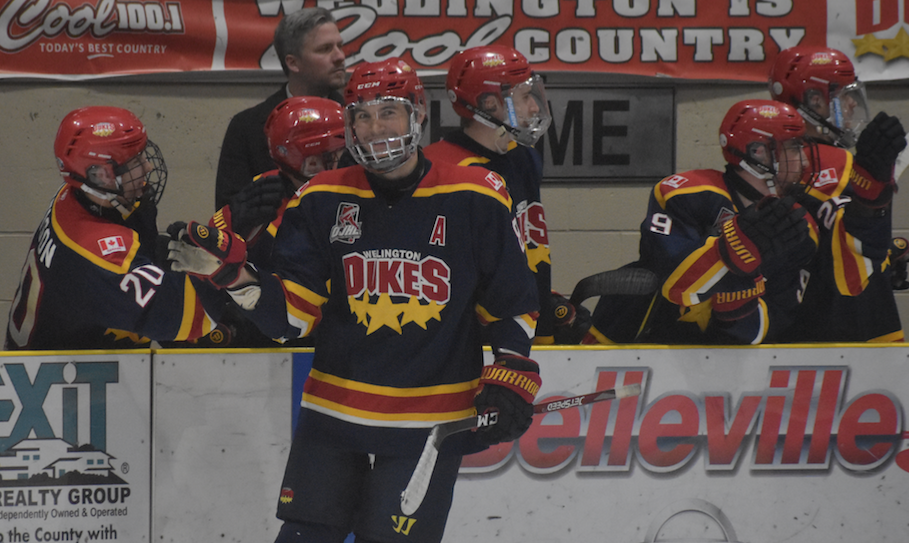 OJHL leading goal getter Jake Gagnon had been having a quiet weekend, picking up just a pair of assists through two games heading into Sunday’s contest but the Point-Claire, QC native made a big splash in the second, taking a loose puck in the Rangers zone, curling to the face off dot and ripping a puck past Schiller and exploding the netminder’s water bottle in the process.

Gagnon’s effort on the power play was his 25th on the season, enough to outpace team mate Frank Vitucci who has potted 21 so far.

Tyler Flack would get the hosts to within four goals with a tally at 55 seconds into the third but Woodhouse would pick up his ninth point of the weekend with a goal at the 5:15 mark of the third period.

On Friday, Wellington played Whitby in a slightly more subdued contest than was the case Nov. 12 when the Dukes won a penalty filled contest at Iroquois Arena.

Despite outshooting the visitors 17-8 in the first period, it was host Wellington that was behind 2-1 after 20 minutes.

Whitby’s Christian Stevens capitalized on a poor Wellington clearing attempt and snapped a puck past Matt Keely just 41 seconds into the game to put the Fury up 1-0. 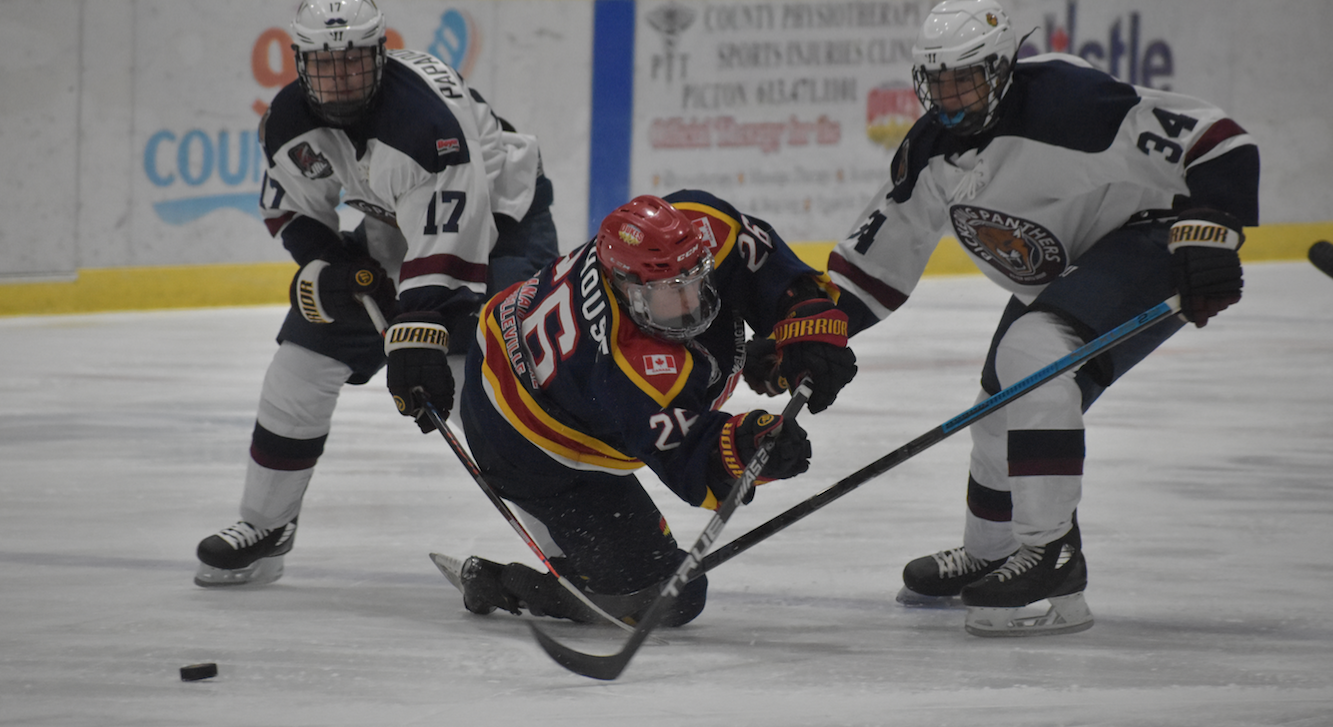 Wellington answered with a nice pass by Ben Woodhouse who sprung Frank Vitucci on a partial breakaway and the American-born sniper ripped a sot from the slot past Whitby starter Connor McKenzie at 5:56 of the first.

But Cameron Warren would set up a second goal in the first as he found Curtis Abbot in the slot at 16:47 to make it 2-1 Whitby.

But Wellington came out like a rocket sled on rails in the second and effectively dismantled the Fury, scoring four goals in the first 13:46 of the stanza.

Brett Humberstone’s backdoor tap in power play goal at 48 seconds into the frame squared the affair at 2-2.

Wellington, getting used to using an aggressive penalty kill to make some hay, would score their third shorthanded goal of the weekend when Panetta would get sprung by Ben Addison at 10:53 to put the Dukes ahead for the first time in the contest.

Wellington continued to mystify the Fury as Woodhouse would bank a puck off a Whitby defender just 31 seconds later to make it 4-2 Dukes.

A  shift later, the Hamilton native was at it again, depositing Jacob Vreugdenhil’s shot from the slot at 13:46.

Whitby’s Oliver Tarr salvaged the period for the Fury somewhat, keeping on a 3-on-1 rush with 2:40 left to keep his club within a pair.

But if the game was wasn’t over at the end of two, it was decided midway through the third when Woodhouse took a nice pass of the draw from Vitucci and slipped home his third of the night at  8:30 to make 6-3.

Vitucci would pot his second of the game in the late going, ripping a shot off the bar and into the Whitby net with under three minutes to play.

Wellington’s Matt Keeley made 31 saves in picking up his 11 win on the season.

On Thursday, despite taking a seemingly impossible eight straight penalties through the first 58 minutes of play, Wellington wasn’t about to be undone by anything occurring on the Lehigh playing surface.

The Dukes would score two shorthanded goals en route to a 6-2 win over the visiting Pickering Panthers as the hockey club tried to go about its business.

Finally, the lack of penalties called on the other side drew Head Coach Derek Smith’s ire and the coach was sent packing for a one game sit down which was served Friday evening.

The scoring was opened early in the first with Quinn Hanna off for an interference call as Vitucci took Landon McLellan’s clearing attempt off a Panther and skated to the Panther goal.

Held up briefly, Vitucci did draw a delayed penalty however, unimpeded, Vitucci was able to regain his stride and beat Panthers starter Tanner Sheppard high for his 18th of the season at 3:45.

Wellington extended the lead at the half way mark of the first as Panetta cruised to the slot and batted a loose puck past Sheppard at 10:12 to make it 2-0 Dukes.

Just under two minutes later, Wellington would get a 3-0 lead.

Hanna would be the benefit of some nice passing off an offensive zone face-off.

Woodhouse would win a draw back to Vitucci and the Wellington defenceman sprang into action, darting to the slot.

Vitucci found Hanna alone in front and the blue liner knocked in his 7th of the season and gave Wellington a 3-0 lead in the first period for the fourth straight game.

In the second, the Panthers would get one back  at 7:29 as Matthew Altomare completed a nice 3-on-2 rush, sending a wrist shot past Wellington starter Matthew Dunsmoor.

The game took an ugly turn in the third as Brandon Brazeau sent a Panther tumbling into the boards on a questionable hit at the Pickering bench that might have been a charging penalty more than a check from behind major infraction. 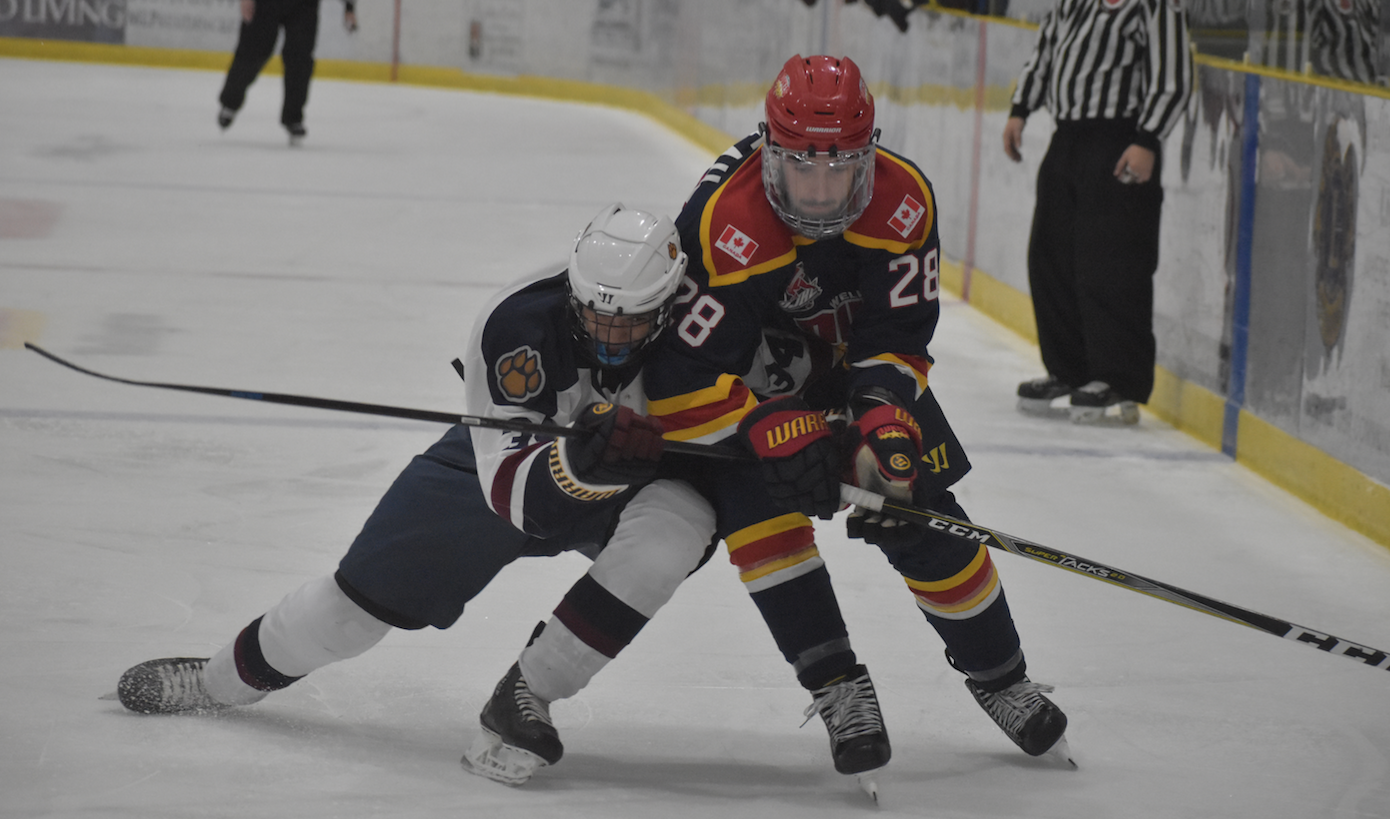 Nevertheless, Wellington was able to kill off the five minute man advantage and had something to show for it as Jacob Breckles caught the Panthers forwards napping and threaded a nice goal line to Picking blue line feed that set up a two-on-one rush.

Taking the pass from his own end, Ben Evans saucered a pass to Jacob Vreugdenhil in the slot for the sophomore forward’s 9th at 8:07 of the third.

Things got comical around the Pickering net at about half way through the period as Panther defenceman Curtis Shukster cross checked Ryan Smith to the ice behind the cage and then threw Brett Humberstone to the ice after the whistle. That was in addition to Nick Papadopoulos attempting to give a prone Humberstone CPR chest compressions. Perhaps not surprising considering their strained  reputation with the Ontario Hockey Association officiating brotherhood, Wellington took the only penalty out of this fracas which was somewhat typical considering the uncalled retaliatory shots the Dukes took after delivering heavy hits to an opposing team that was trailing on the scoreboard virtually all night.

Shortly after Ryan Smith emerged from the sin bin, Wellington would score as Ben Addison sent a puck towards Sheppard and it deflected off off a Panthers defender.

Afforded a sixth straight power play, Pickering would finally click on the man advantage as Nathan Gooch found time and space to beat Dunsmoor at 15:47 to make it a 5-2 deficit for the visitors.

Gagnon picked up his first point of the game at the 18:34 mark of the period when, after getting hacked relentlessly in his own end, fed the puck to a streaking Evans who found Brendan Bygrave and the defenceman sent a puck under the catching arm of the Pickering netminder to make it a 6-2 final.

The non-call on his linemate drawing his ire, Evans finally had enough of the officiating on this night and drew a misconduct from the bench and a fed up Smith also got the gate for protesting what was and wasn’t being called on the ice by OHA referees Duane Parliament and Brad Moore.

The leather-lunged Wellington faithful had also seen enough and let the officiating crew hear their displeasure for the final two minutes.

Pickering finally picked up a minor penalty with less than a minute left.

Wellington welcomes Cobourg on Friday night and then hosts Aurora on Sunday.