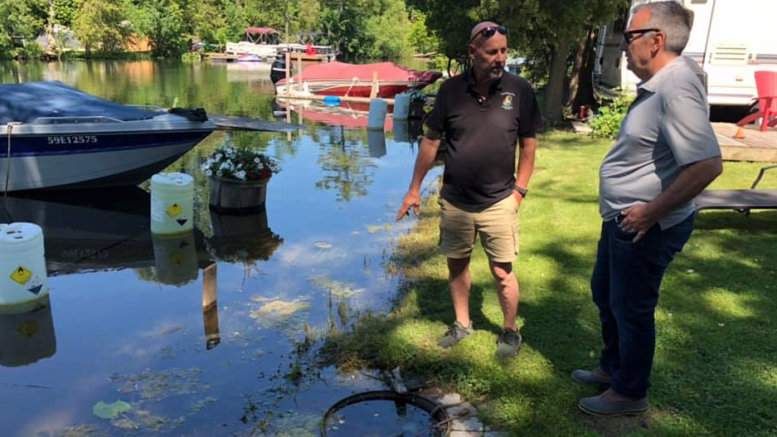 What exactly next spring and summer will look like at the shores of Prince Edward County remains to be seen but it appears the International Joint Commission is listening to concerns over Lake Ontario water levels and the much decried Plan 2014.

It’s been a busy week on the front lines of the battle to ensure a third flooding event in four years doesn’t further ruin shorelines and devastate businesses in the Quinte area.

With Lake Ontario water levels still well above average and fear that 2020 could bring another round of high waters that would erode shore lines, kill tourism opportunities at lake side business, hamper boaters, wash out infrastructure, etc. over 400 people turned up at a rally in Trenton on Wednesday evening protesting the Plan 2014 and the IJC’s regulation over the St. Lawrence Seaway.

Earlier in the day, Bay of Quinte MPP Todd Smith announced Premier Doug Ford had written Prime Minster Justin Trudeau requesting more representation on the IJC and that the federal government act immediately and appoint an IJC Commissioner from the region hit hard by record water events in 2017 and 2019 (See Page 10).

Finally, on Thursday, Sarah Lobrichon, a spokesperson for the IJC, told The Brockville Recorder & Times that the IJC has given the International Lake Ontario-St. Lawrence River Board the authority to deviate from Plan 2014 flows during the current crisis until Lake Ontario peaks sometime in the summer of 2020.

“This provides as much authority as under the old plan so that the board can use every opportunity to release water without causing downstream flooding or severely harming other interests,” Lobrichon told the Recorder & Times reporter.

This deviation will allow small amounts of water to be removed from Lake Ontario in order to reduce the risk of further high water levels next year.

Brockville and the Thousand Islands region, like Prince Edward County and the Quinte area have been devastated by high water levels that are, according to property owners, politicians and some experts, a creation of Plan 2014.

The current plan which governs water flows along the St. Lawrence went into effect in 2016 and replaced Plan 1958.

Not long after instituting a new plan which was developed in part to improve shipping conditions, restore wetlands and answer ecological concerns, water levels on Lake Ontario started to rise to record highs-causing shoreline erasing and devastation along all sides of the Lake Ontario shoreline and the St. Lawrence all the way to the Moses-Saunders Power dam in Cornwall.

Along with his colleagues from adjacent municipalities, County of Prince Edward Mayor Steve Ferguson said it was important for the communities that share the Bay of Quinte to rally together and understand that there’s support from local municipal, provincial and federal leaders.

“I think everyone here acknowledges something needs to be done about this problem now,” Ferguson told the Gazette. “Considering lake levels are forecast to be 12-18” higher (than average) by the end of the year and potentially coupled with a wet spring, another year like 2019 would be disastrous for our residents and businesses.”

While advocacy and public attention are part of the process being put on government leaders who could exert political pressure on the IJC, Ferguson said the municipal management team continues to meet on a month-to-month basis to make sure preparations are in place should high water levels hamper Prince Edward County again. Ferguson said staff are proactively mapping out the areas that are expected to be hit hard if levels rise and precautionary plans for the deployment of sand, sand bags and other resources that will hold the water out are underway.

“We need to ensure public safety is addressed and part of that is making sure residents as well as first responders can get into and out of properties that could be affected,” The mayor added.“As well, we are looking at adjusting road levels and compensating in low lying areas.”

The Eastern Ontario Mayor’s Caucus passed a resolution calling on the IJC to revert back to the water management system that was previously in place and the Eastern Ontario Warden’s Caucus is expected to do likewise when it meets in December.

“The support calling on the IJC to do something is growing exponentially.”

The mayor added local residents have expressed their frustrations to him during site visits and phone calls. Ferguson said people are “taking matters into their own hands” because they watching the continual erosion of investment and property.

“So there’s that level frustration out there but I would ask for property owners to contact Quinte Conservation before they do anything regarding changes to their shoreline,” Ferguson added. “The people I’ve talked to have said the Conservation Authority have been wonderful to work with during this crisis. They’ve been very responsive and very understanding to the issues facing shore line owners dealing with erosion.”