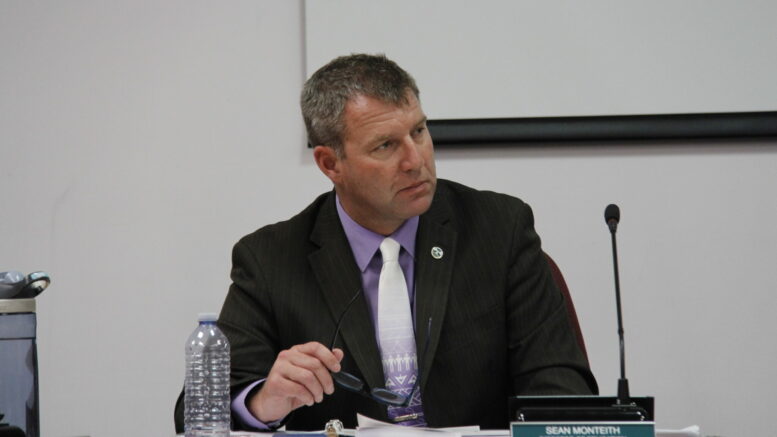 FUNDS IN FUNDS OUT Director of Education for the Hastings and Prince Edward District School Board, Sean Monteith at a board meeting earlier in the year. Monday evening at Eastside Secondary school in Belleville a school board meeting was held and the 2018-2019 Consolidated Financial Statements were discussed. (Desirée Decoste/Gazette Staff)

The tightened reins on the purse strings of the Hastings and Prince Edward District School Board will start to loosen as the public education body begins to see the light at the end of their provincially mandated financial recovery tunnel.

At a board meeting Monday night at Belleville’s Education Centre, HPEDSB trustees approved the consolidated Financial Statements for the year ending Aug. 31, 2019. As the final year of a three-year multi-year financial recovery program  which was instituted by the Ministry of Education back in 2016 when the Boards’ accumulated surplus ran dangerously low after years of utilizing reserves to balance budgets, the board is ecstatic for a long awaited end.

“It would feel a lot better if we didn’t have to talk about a financial recovery plan and we’re not there yet but I think progress has been made and I think credit needs to be paid to the board for the hard decisions it’s made,” said Sean Monteith, Director of Education with HPEDSB. “I think credit needs to be given to the people in positions that have come before us, including mine. They’ve had to oversee tough decisions and tough decisions are always subject to scrutiny. It’s always easier to criticize. I think the best way I can characterize is we’re seeing the light at the end of the tunnel, it feels good but it won’t feel great until we have some flexibility and some breathing space to be able to offer innovative programs.”

The board spent $204.9 million last school year while taking in $211.8 million in revenues. Board revenues were $6.9 million higher than expected due to increases in various provincial grants and an increase in local taxation. Overall expenses were $3.4 million higher than budgeted but, after all accounts were settled, the Board is reporting to the Ministry of Education a positive variance of $5.1 million and that brings up the total accumulated surplus to a healthier $9.5 million.

However, don’t expect the HPEDSB to start utilizing money from that envelope immediately.

“We don’t actually have a surplus of $9.5 million,” expressed Monteith. “We have a little bit of money and most of what is identified in the media as an ‘available surplus’ is tied up and beyond reach of us to make discretionary spending decisions such as hiring more staff, adding on to a school, creating a new program or adding a bus and we don’t have that flexibility. Part of it is the money is earmarked for certain things, future liabilities like retirements, we have to be cognizant of that. We also have money earmarked for capital projects such as potentially a renovation or a capital improvement at one of our high schools.”

Monteith also stressed the board has to ask for permission from the Province to spend any surplus, and, currently, the Province has somewhat frozen that ability so they don’t have any flexibility on any kind of surplus.

“You want to be able to be a board that attracts and promotes innovative and specialized programming which is tailored for kids,” said Monteith. “When you’re really looking at core business and you can’t branch out, that’s tough, so getting out of a financial recovery situation will allow us a bit of breathing space and a little bit of breathing space is better than limited or none and that’s where we’re headed.”

The $3.3 million increase in Provincial funding is cause multiple things such as, an enrolment adjustment, among a re-evaluation of the teacher qualification and evaluation grant and more.

“There was a bit of an audit done by the Province,” Monteith stated. “What they found was we were under funded by about $750,000, and we received that. We also had some significant deferrals of education project type of funds, which are enveloped or earmarked for very specific projects.”

Instead of the Ministry taking or clawing the money back, they deferred the money which should have been spent in 2017-2018 and deferred it to 2018-2019.

“You factor all that into the pot and that’s where you get the $3.3 million,” Monteith told The Gazette.

According to Monteith the Financial Recovery Plan has been driving a lot of the decisions the board has made and they are constantly having to check themselves because they’ve had to ask permission and check in monthly with the Ministry of Education.

“I think it’s safe to say we’re in a period of change and I think the senior administration and the administration as a whole is an environment which we recognize is changing and sifting,” Monteith said. “I like to think the administration as a whole is constantly being re-evaluated and I know change causes some level of anxiousness and discomfort but we’re focused on a student improvement/student achievement agenda and we will continue to have to re-evaluate what we’re doing here until that agenda starts to bare fruit.”

As an incoming Director of Education hired by HPEDSB this summer, Monteith is relying heavily on his administration colleagues at the senior table to give him their best advice on how they feel they should be making decisions and maybe adjustments in their various program areas. The Director believes senior staff deserve an A+ because they are an incredibly talented group of people and he’s proud to be part of the team.

“We’re on track, but what the alternative to not adhere to a financial recovery plan and the side effect of it, is not very positive,” Monteith told The Gazette. “We have to bear in mind, we are beholden to our funder who is the Ministry of Education. So the sooner we get out of a recovery situation, the better off we’ll be.”