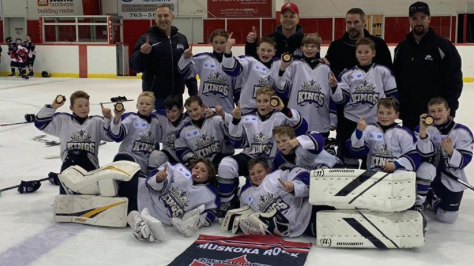 ROCKING AND ROLLING- The Terpstra Equipment Atom B Kings celebrate their championship at the 2019 Muskoka Rock Hockey Tournament in Port Carling, ON on Sunday. (Submitted Photo)

The long, white knuckle drive home through a snow storm from cottage country Sunday night for the players and parents of the Atom B Terpstra Equipment Kings was made slightly easier with the knowledge the local minor hockey team had a just won a hard fought tournament title.

Playing the role of heart breakers, the Kings scored three goals in a two minute span partway through the third period of the final game against the host Muskoka Rock Sunday afternoon to erase a 2-0 deficit and successfully cap off an undefeated run at the 12 team tournament with a 3-2 finals victory.

Kings bench boss Dan Kempers said the club’s depth and commitment to work hard at both ends of the ice have been paying off for the young squad and that work ethic culminated in this weekend’s triumph.

“When the staff got together to pick this team, we wanted players that were going to work hard, be coachable and have the commitment to back check and play their position properly at both ends of the ice,” Kempers said. “I think the best compliment we received as a team this weekend was from the referee in our semi final game who came up to us and said he couldn’t believe our positioning on the ice. He said there are midget teams that still haven’t figured out how to play the way we were playing in that game.”

Having suffered just one loss in their last 11 games heading into the weekend, the Kings started off the right foot Friday night blanking the South Muskoka Bears 6-0.

Goaltender Jack Lavender posted the goose egg for the locals while Jake Goad paced the offence with a third period hat trick.

A Ryker Wood wrap around special, a Drake Wight tap in and an Avery Cole end-to-end rush was the other Kings offence in the Friday night game.

In Game 2, the Kings kept up the pace at both ends of the ice.

Ross Martin would get the Kings their second clean sheet of the tournament while Goad banged home a pair of goals to open and close the scoring.

Wood again scored from the goal line while Caleb Krentz added a single and Lane Kempers used grit and determination to pick up a short handed effort.

Later in the day on Saturday, the Kings and the Englehart Express hooked up in a battle of the last remaining undefeated teams and Coach Kempers figured his club was in for a tough battle.

“We knew this game had implications for what we were hoping to accomplish and it would take everything we had to get past Englehart,” he said.

Lavender was spot on through two periods of play but the Kings were also unable to find the range.

Finally, Wood would pot a nifty shorthanded effort to break the ice in the third.

Minutes later, Krentz would be sprung by Jaydon Hass for a second Kings marker on a tally that would stand up as the game winner.

Ahead 2-1, Goad would score with about 90 seconds left with a laser beam to the top of the Express net to salt the game away for the Kings at 3-1.

The clubs would meet again in the semis but this time it was the hard-working Kings finding the Englehart net early and often in a 5-0 whitewash.

Martin was solid when he had to be picking up his second shutout of the tournament but the locals were in possession of the puck for most of the contest.

“Everything that could go right did,” Kempers told the Gazette. “From the opening face off to the buzzer, we made all the right decisions on the ice and we were committed.”

Jack Thompson would bang home a puck in the slot to give Prince Edward County a 1-0 lead through the opening period.

In the second, Hass would also score from the slot to make 2-0 Kings.

The Kings opened up the scoring in the third thanks to a pretty face-off play that saw defenceman Brady Terpstra deliver the puck to Thompson who would moved it over to a wide open Wight for Prince Edward County’s third of the game.

“We couldn’t have drawn it up any better,” Kempers said.

Wood would set up Goad to make it 4-0 and Krentz capped off the scoring, taking a nice saucer pass from Hass and beating the Express goalie clean on a breakaway.

The semi finals win set up a showdown against the host Rock club who bested the South Bruce Blades in the other semi final match up.

After two and half long days at the Bala and Port Carling Arenas, respectively, and hotel living starting to show its effects, the Kings got off to a slow start in the finals as the Rock had their home fans rolling thanks to an early first period goal.

“They were a tough, strong team and we knew we would have to weather the storm early,” Kempers said. “I thought for the first two periods we really had trouble getting our legs moving.”

The game stayed 1-0 for the hosts until the second when a point shot from the Kings blue line into the shin pads of an oncoming forechecker set up a successful breakaway for Muskoka.

Down 2-0 heading into the second, the Kings and their depth took over.

“(Muskoka) only had two lines and we really started to skate in the third period,” Kempers said.

Goad would get the Kings on the board, banging home a rebound a couple of minutes into the frame.

The Kings, now buzzing and the Goad goal going right to their legs, started to force their will on the hosts and Goad would score an identical goal within a minute or two of his first of the contest to tie the game at 2-2.

With the Rock stunned, Lane Kempers found a loose puck in front of the Muskoka net and pumped home what would be the championship goal with about ten minutes left.

In the Kings net, Lavender was phenomenal down the stretch and got some help from his teammates to boot.

“There were at least two times where Jack made a save and the puck went up and bounced over him but our defencemen were there to clear the goal line,” Kempers recalled.

Cole picked a potential game-tying goal off the line and her overall strong play netted her player-of-the-game honours afterwards.

Finally, the buzzer sounded and the Kings were winners.

After the game and the on-ice awards, the players gathered in the dressing room with arms around one another, belting out the Queen standard ‘We are the champions‘.

“It’s one of those moments I hope they alway remember,”  Kempers said. “I told them how proud I was of them and how important it was that we dug deep when it mattered the most.”