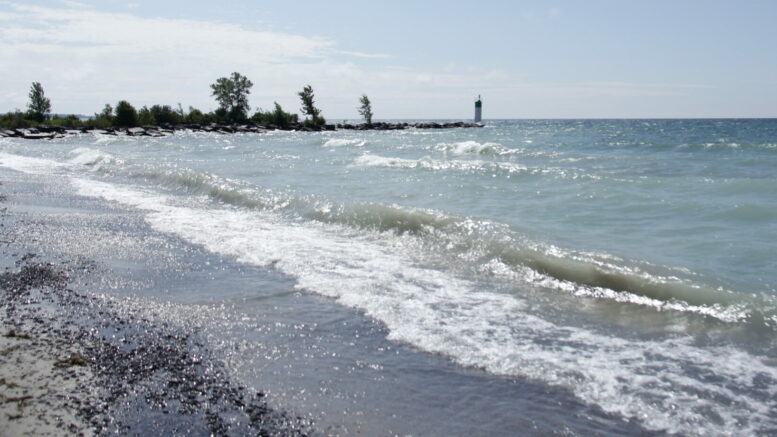 A rising tide of frustration swept through Shire Hall Thursday when the issue of how to properly maintain and care for Wellington Beach was brought to the Committee of the Whole Meeting. Wellington Councillor Mike Harper requested a staff report containing a detailed plan and budget considerations regarding a number of issues surrounding the beach.

The need for further investigation into the operation of Wellington Beach comes after a plan put in place in 2017 wherein staff submitted a Wellington Beach Operating and Improvement Plan contained many actions that have yet to be carried out.

The request also follows an agreement between the Ministry of Natural Resources and Forestry and the municipality whereby the County agreed to channel dredging, beach cleaning and raking. Wellington Beach in the summer of 2019. (Desirée Decoste/Gazette staff)

The state of the beach and chanel that allows boats to navigate from West Lake to Lake Ontario and vice-versa brought many new concerned citizen voices to Shire Hall.

John McCrae of the Coast Guard Auxiliary Search and Rescue based in Wellington Harbour brought forth concerns the Coast Guard may not be able to operate there in the future should the channel not be dredged properly.

“Wellington Rescue is the first responder for marine emergencies from Nicholson Island, Prince Edward Point, and out to the U.S. Border. That is an area of 2,400 square foot kilometres, which includes 150 km at the south shore of Prince Edward County. The channel in Wellington is vital to this task and for the first time since this service came into being, it appeared we would be out of service in 2019 because of the lack of depth, due to the failure to execute dredging of the channel into Lake Ontario,” McCrae stated.

“Thanks to the disastrously high water levels this summer, we were able to operate, which was fortunate for the nine individuals we assisted in 2019 who would have been in serious trouble had we not been available,” he added.

Outlining the threat, McCrae emphasized that should the channel not be maintained at a depth of at least 5 ‘, the County is in danger of losing the designation as a safe haven and harbour, as well as losing the Coast Guard maintained light house.

“They are obstinate about the use of the beach. We gave you a beautiful beach.(The) Rotary (Club of Wellington) put it together as a project and you wrecked it, which is problematic for a lot of reasons,” he said.

In his deputation, Nash cited the possibility of losing the lighthouse, the volunteer Coast Guard, and the lost economic opportunity associated with having a functional, safe harbour.

“Imagine if the County could make money off the Sandbanks Beach. Well, here’s your Sandbanks Beach and you don’t take advantage of it…I would ask you do some sort of study-because you’re really into studies-on what sort of special equipment is required to get rid of a dead fish, because I’ll give you a shovel,” Nash said.

Furthermore, Nash stated the County has declined participation in both having a trash bash to clean up the beach or sending volunteers to do so for them.

“The issue is, when you talk to staff about this, they don’t want to deal with it. It’s not their problem. Not their department,” said Nash. “I get it-there’s rules about things. But there is also pride in the place you live and it’s really disappointing to watch our beach turn into our toilet.”

Though the County boasts a considerable number of volunteers, Nash issued a warning that should the municipality continue to present roadblocks for volunteers, volunteer fatigue will continue to be a growing problem.

Councillor Bill Roberts spoke to Nash’s deputation, arguing that he should direct his criticism to Council and not toward staff.

“I’ll just speak for myself,” Roberts said. “I don’t think it’s productive to throw staff under the wheels of your particular truck. I think if there is a failure, it is the failure of Council. If there is a finger to be pointed, it should be pointed to this horseshoe and not to staff.”

Mayor Steve Ferguson also urged Nash to direct his criticism to Council as opposed to staff, while acknowledging Wellington Beach has issues that need attention.

“I’m going to stand up for our staff. The way in which they are directed is a fault of Council and that is something we have to attend to, because they shouldn’t be baring the brunt of this. But what we heard, through not just the deputation and other comments, is we are disrespectful to donors, who I want to thank for their contribution and willingness to assist,” stressed Ferguson. “We’ve got threats to safety through the matter of getting boats out to rescue people. June 23rd, I walked along Wellington Beach with the Lieutenant Governor (Elizabeth Dowdeswell), picking up litter. Thankfully, there was no dead fish or birds present, but it was difficult enough. The problem is understood. This is something we have to look at very carefully and attend to.”

The resolution for staff to report back to Council regarding Wellington Beach by late February, put forth by Councillor Mike Harper and seconded by Councillor Phil Prinzen, was passed.