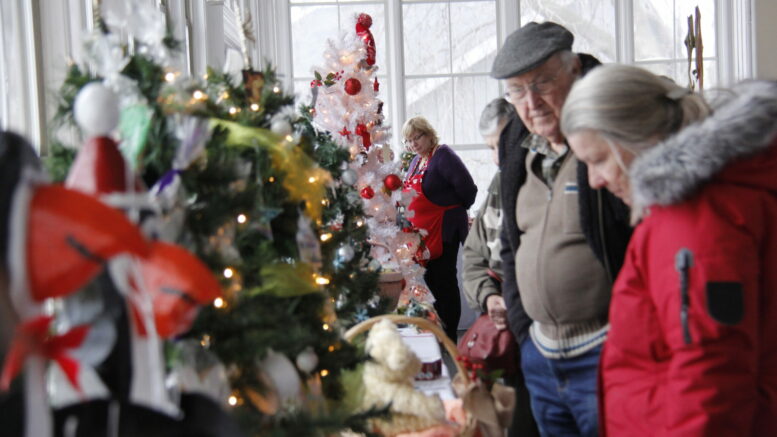 OH WHAT A BEAUTIFUL SIGHT- Upwards of 200 trees containing gift certificates, goods and treats were part of the silent auction at the 26th annual Festival of Trees at Isiah Tubbs Inn and Resort on West Lake this weekend. (Desirée Decoste/Gazette Staff)

The trees were lined in the windows with care with hope supporters of the Prince Edward County Memorial Hospital Auxiliary might come see them there.

The 26th annual Festival of Trees was once again a huge success over the weekend with nearly 200 trees being auctioned off raising in the neighbourhood of $50,000 for medical equipment costs at the local hospital. The venue, being held again at the beautiful Isaiah Tubbs Resort, hosted a wonderful array of Christmas trees and wreaths, among other items in the silent auction.

As for the festival’s festive foods sale, new items were added making a wider selection for meals and treats and the Christmas Boutique with all their donated items for sale made the event enjoyable for everyone who made their way to West Lake over the course of the weekend.

“People are absolutely interested in the Festival,” said Jack Starkey, Chair of the Festival of Trees committee. “I had one person comment that this years festival was the best he’d ever seen with the set up of the trees and everything and he’s been to quite a few.”

The first two days of the festival opened to bright but chilly weather… and then came the first really big snowfall of the winter season in the County.

“When I was walking around the festival there was a ton of people on Friday, more than I can ever remember, and a great crowd on Saturday as always,” stated Starkey. “A little bit less on Sunday because of the storm but considering the weather, there was a lot of people present.”

For the bake sale volunteers sold all kinds of goodies from sweet delectable cakes to tarts and canned pickles to creamy frozen soups-you name it, the volunteers more than likely had it… until they sold out of course.

“Even though we’re only on the first day, the bake sale is going excellent so far. We’ve had an excellent year in preparing the preserves which starts in March and goes on weekly through the year till we wrap up in the late fall,” expressed Beverley Thompson, Coordinator of the festive food sale at the Festival of Trees and hospital auxiliary volunteer. “We started as a group baking together as we mostly haven’t done baking together before. We really enjoy getting together and baking.”

As for the recipes of the food sale items, Thompson said many of the ones they used were very traditional. 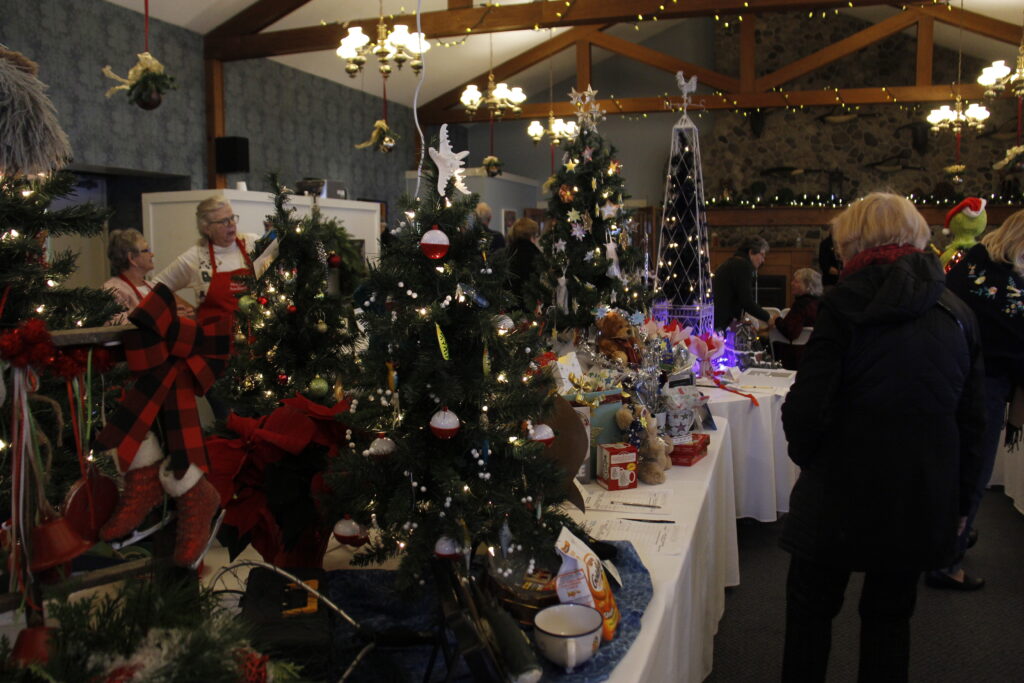 LINING UP Christmas trees on display for the silent auction at The Festival of Trees. These tree could have been seen at The Restaurant on the Knoll at Isaiah Tubbs Resort and conference centre. (Desirée Decoste/Gazette Staff)

“Many of the recipes we use are very traditional,” claimed Thompson. “Piccalilli for example is a British pickle, the tourtière are from Quebec,” Thompson said. “The sweets, I think a lot of them would have a British tradition, the pickles, not so much, as the pickles would be more middle east kind of thing.”

Beth Strauss, a festival attendee, said her favorite part of the festival is the preserves.

“I think my favorite part of the festival would have to be the preserves,” said Strauss. “This is our red hat Christmas party so there are 14 of us total here enjoying the festivities, and we had lunch at the Knoll which was excellent.”

The aim of the 2019 Festival of Trees was to provide funding for the purchases of new IV infusion pumps for use at PECMH as all medical equipment has a best before date. The committee has already purchased a great number of  pumps and is committed to buy 15 this year.

Unofficially the Christmas Boutique raised roughly $14,000 this year, an increase from last years total and the festive food sale and the silent auction received roughly the same amount as last year.

“My favorite part of the festival is probably the whole thing,” said Lory, a festival attendee. “The lights, the music, the people, the spirit of the community and, shopping wise, there is everything here. You don’t need to go anywhere else, you can do all your shopping here.”

If it wasn’t for all the dedicated volunteers who donate their time and energy to help with the event over the weekend, The Festival of Trees sleigh wouldn’t have taken off so easily.

“A couple of years ago the committee received a number on the volunteer hours because we ask everyone to put in their hours and to keep track of whats going on,” Starkey told The Gazette. “What they told me at that point is they had about 1,600 volunteer hours in total recorded. What I know for sure is people tend to under record their hours, so it’s a lot of people, a lot of time and it’s a big thing.”

As for improvement, Starkey expressed there is always room for change but nothing really significant to improve or change on.

“I can’t think of anything to significant to improve, someone suggested we might have Santa Claus on the Friday, which we haven’t had before and I’m not even sure why,” Starkey said. ”One thing we did this year which improved was the final day take down. We had so many people working together and everyone knew what their job was, as opposed to previous years where things were a little disorganized and jumbled. So this year was great and our people at the event just keep getting better organized, keep getting better at dealing with the people and the money and getting our message across and actually, I think we’re doing an absolutely fantastic job.”