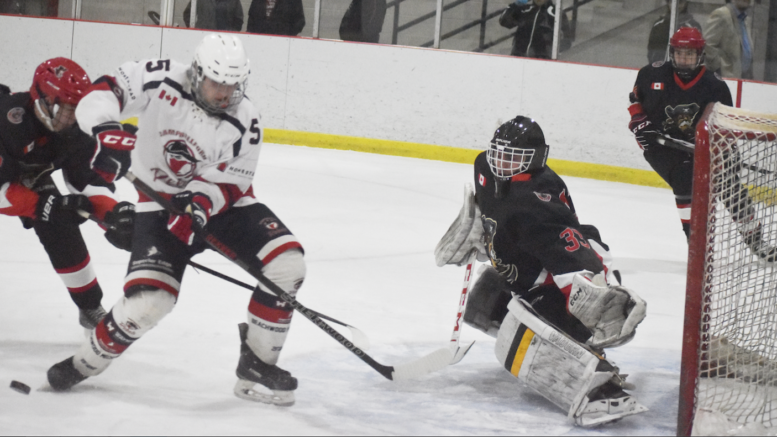 The level of joy on the Huff Estates Arena ice surface Thursday night as the Picton Pirates kept pumping goals into the Cambellford Rebels net was a diminishing product.

The Pirates scored early and often on the visiting Rebs who were coming off their first win of the 2019-20 Provincial Junior Hockey League campaign and the deficits by which the club was losing games had been shrinking significantly in recent weeks. With netminder Brennan Bush coming over from the Pirates in a deal last week, the earmarks indicated Thursday night’s game could be a close contest-Picton with something to prove after winless a weekend and the Rebels picking up momentum in recent weeks.

But the Campbellford Rebels were like a rolling log on Thursday night and the Picton Pirates were the proverbial buzz saw.

The Pirates would score the first 15 goals of the game Thursday night and the contest might have been labeled a laugher if not for the way a former teammate was left to roast in the Campbellford net.

Picton-turned-Cambellford goalie Brennan Bush was pulled in first period after the Pirates had potted four goals and then re inserted into the contest to start the second period.

After the Rebels stopped competing in the middle frame, Bush was left on his own and gave seven more goals before finally and mercifully being relieved by Campbellford’s Michael Brassor a second time. 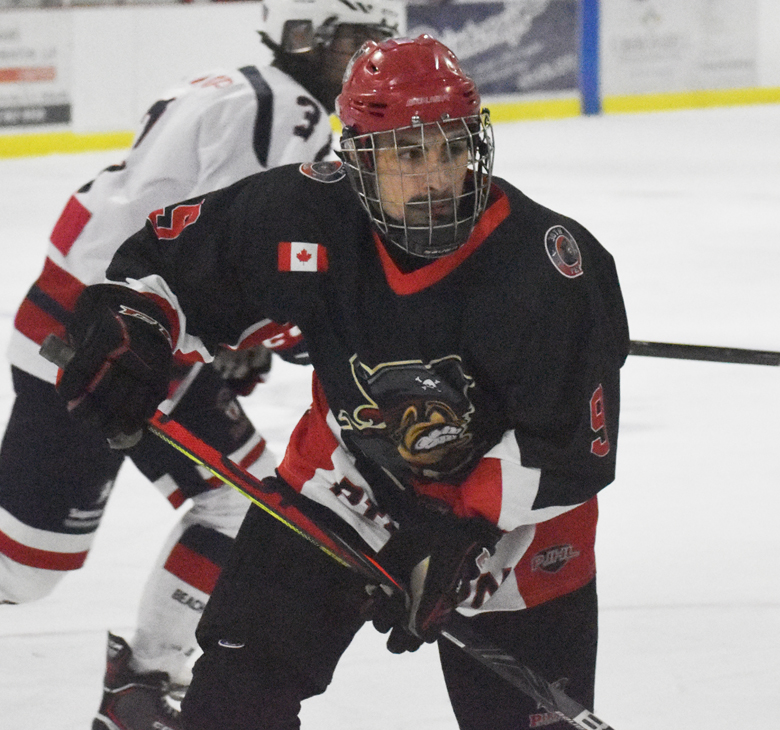 ALL IN Picton Pirates captain Will Harrison had one of his best offensive showings for the hockey club Thursday , scoring four goals and adding four assists in a 16-1 win over visiting Campbellford. (Jason Parks/Gazette Staff)

The former Pirate certainly deserved better from his current club on Thursday night and his former coach said it was emotionally difficult to watch the proceedings.

“I like Bushie, he always battled hard for us over the last year and half, he was a great guy on the ice and in our dressing room. It wasn’t a great feeling at all to watch what was going on,” Pirates head coach Ty Green told the Gazette.

And lest one might think Picton was running up the score with gusto, the Pirates were simply competing hard and getting a lot of bounces. Deflections in front of the Rebels net, happy bounces off the boards, you name it, Picton was the benefactor of puck luck for a great portion of the hockey game.

In terms of his club and where they stand, Green said blowouts can be tough to guage a hockey team however, after and up tempo practice Tuesday night where Brian Bygrave and Landon McLellan were able to get worked into a unit, the coach is happy with the direction his team is heading.

Bygrave was added from the Wellington Dukes prior to Thursday’s game and the Kanata, ON native had three helpers in the decisive win.

“The confidence in the dressing room on Tuesday was rising. Picking up Bygrave who is a big body and has that Jr. A experience is wonderful for us and we know what kind of a talent Landon is. He’s an incredibly smart player and we are fortunate to have him back,” Green said.

The Pirates find themselves trailing the Port Hope Panthers by eight points for the final playoff spot in the PJHL’s Tod Division.

Both have 18 games left in the season and play head-to-head four more times this season including tonight in Picton in a contest the locals must treat as a playoff-type contest.

“I know the players know exactly where we are in the standings and what we need to do to get into a playoff challenge. With the new skaters coming in and (Kyle Renaud) back in the fold, the guys know it’s a huge challenge but one they are ready for and looking forward to,” Green said.

In terms of Thursday night’s game, Picton might have known what kind of game it was going to be when team captain Will Harrison scored just a dozen seconds into the game.

Blueliner Nick Kyte would count at 3:17 while Harrison set up linemate Griffen Conger at the 11:31 mark.

Harrison would add a second goal with just over five minutes left in the period as he grabbed a loose puck and potted a shorthanded marker.

If they hadn’t already, the Pirates buried the Rebels in the second with seven unanswered.

Kyte scored his second of the game in the first minute and then Harrison scored his hat trick goal after some nifty passing in the Campbellford zone at 6:06.

Bygrave got his second helper of the night at 11:41 as his nice pass across the goal mouth found Brayden Adams for a tap in goal. Jack Dow would score on the powerplay at 14:00 and Harrison would get his fourth of the evening 1:47 later.

Khaden Henry would strip a Rebels puck carrier in the Campbellford zone and score Picton’s 10th of the game.

Finally, Garrison Moore’s third of the year at 17:19 of the second spelled the end of the night for Bush.

In the third, the Pirates kept finding the Rebel net. Kyte set up his defence parter Jacob Dietz at 2:52.

Garrison Moore would pick up his second helper of the game when he set up Dawson Lindsay at 6:31 of the third.

Since coming over from the Gananoque Islanders in a trade for Matt Poole earlier this month, Lindsay has two goals and five assists in his first seven games as a Picton Pirate.

Harrison set up Conger for his second of the night 29 seconds later.

Picton native Nolan Dawson got in on the scoring parade at 9:03, notching his second goal of the season.

Picton would to its goal total as Aiden MacDonnell and Harrison set up Dietz for his second of the frame.

Picton’s captain led the way, scoring four goals and adding four helpers for an eight point outing. After hosting Port Hope, Picton is in Napanee on Friday night and head to Clarington for a battle with the Orr division’s second place team.