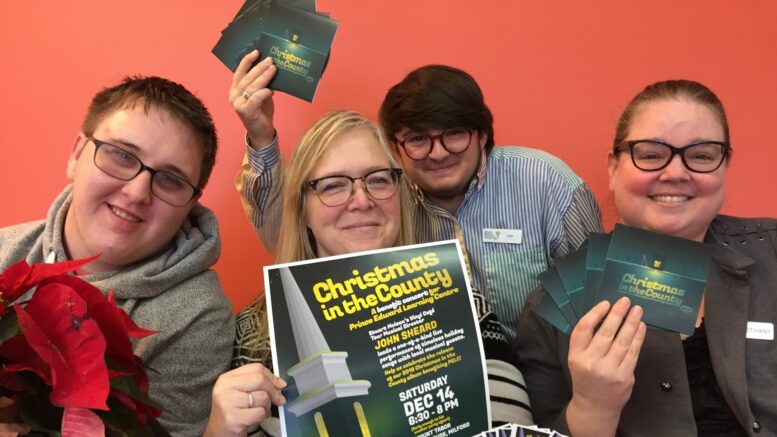 REASON TO SMILE - (L-R) Bradley O'Neil, Lori Farrington, Ellis Greenberg and Bethany MacInnes pose with copies of the 2019 Christmas in the County album and a poster for the accompanying Mt. Tabor event. (Submitted Photo)

The season of giving is here and once again, Christmas in the County, an annual musical fundraising tradition, is returning. This year, the fundraiser will feature not only an album to take home, but also a live performance boasting the likes of John Sheard of The Vinyl Cafe.

As in the past, proceeds will be going to Prince Edward Learning Centre.

The album is a labour of love that friends, Dave Ullrich of Zunior Canadian Music and Originals, along with Lori Farrington, Literacy Instructor at PELC, began in 2012.

Having been a musician with the Inbreds and Egger, as well as being a music lover and developer, Ullrich leads the team at Zunior, who also produces the album.

Farrington is somewhat of a local legend when it comes to championing the arts. She has been involved with Christmas in the County each year, helping to organize, market and even perform.

“My work with the project is to work with Dave with everything from selecting musicians to contact, working with musicians to get their contribution handed in on time, choosing an artist for the CD cover, working with local businesses to sell the CD, and social media,” said Farrington.

“I’ve been connected with John Sheard for years through the work I do as the official store for the Vinyl Cafe,” noted Ullrich. “John has been Stuart McLean’s musical director for almost 20 years of touring across Canada.”

All The Vinyl Cafe favourites, whether books or albums, can be purchased through Zunior.

“I’ve seen him (Sheard) perform on stage many times and he’s amazing- christmas songs, medleys and stories of touring with the Vinyl Cafe,” said Ullrich. “Having him back-up some artists from our CDs will allude to the days on tour when he would back young new musicians (at the time) like Jill Barber and Matt Andersen.

“This is kind of the first official concert of sorts in the sense that we’ve done release parties, but this is an actual event for all to attend,” stated Ullrich.

The idea, he continued, is to combine the talents of Sheard (and his bass player Dennis Pendrith) with a few local artists to create a one of a kind experience in the beautiful Mt. Tabor Theatre.

“Music is always a great way to bring people together and this is another chance to do that while raising funds for PELC,” he added.

Apart from bringing holiday tunes to the stage, another key change in the format of Christmas in the County is that the album is now 100 per cent original songs.

“Last year and this one has been all original songs and it is the way to be,” enthused Ullrich. “It’s a nice way to to either showcase County songwriters, County players or County stories…that last one being the key. The more County stories the better!”

The show, which takes place December 14th from 6:30-8pm is about 30 per cent sold out so far, and organizers are hoping for a full house.

Beer, wine and food will be available for purchase and the event is geared towards being family friendly, with an emphasis on good times for all.

The album version of Christmas in the County will feature songs from Annelise Noronha, Cue the Funk, Jill Barber and more. The album can be purchased soon at Books and Company for $12, and alternately are already available online at: https://zunior.com/collections/last-seven-days/products/christmas-in-the-county-2019

Tickets for the show are $20. They can be found online at Zunior.com. Or, they can be purchased from Lori Farrington at PELC, located in the Sobey’s Plaza, Picton.