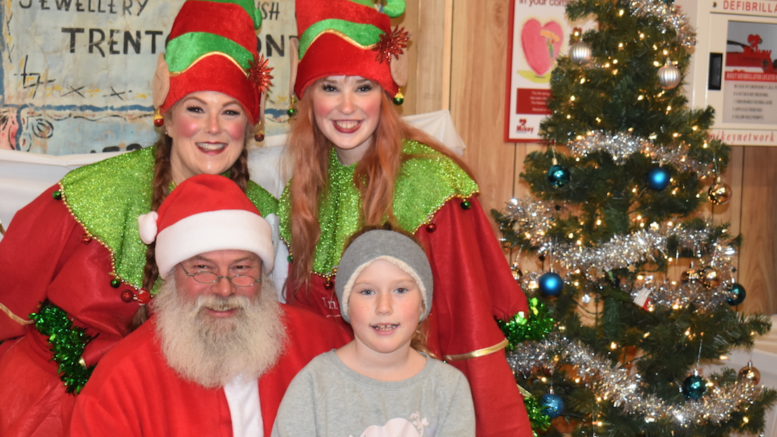 SANTA HAS BEEN FOUND - Santa and some helpers listen attentively to Avery McCormack and other children who came to visit Santa in Consecon Sunday. (Sarah Williams/Gazette Staff)

After a two year hiatus, Santa Claus once again touched down in the village of Consecon Sunday.

Christmas in Consecon was a full-day of family friendly Christmas events, including a breakfast with Mrs. Claus and elves at the Consecon Legion branch 509, a balloon artist and face painter as well as an LED christmas card making station. Though the parade had faced near extinction due to lack of volunteers, the event was given a new lease on life with the creation of the Christmas in Consecon Committee, a sub-committee of the Ameliasburgh Recreation Committee.

“I’ve lived her 31 years,” said organizer Amanda Laird. “I grew up coming to the Consecon Parade since as long as I can remember. When it stopped happening the last couple of years, I was pretty upset because I have two of my own children now, so I kind of wanted them to be able to have that experience.” Laird explained that the absence of the parade was felt throughout the community, so she began rallying last year to have Santa and his team return to the village. “This parade has basically been in the works for a year,” explained Laird. “Last year, we put together a day, but we didn’t have time to get the parade in order. So, we’ve been prepping since last year to get it ready for this year.”

Laird notes that when she realized the parade had ceased to exist due to lack of volunteers, she immediately offered her time and energy to make sure the parade could return.

This year, the event boasts about 20 volunteers on the Christmas in Consecon Sub-Committee.

“I feel like this year we have a ton more volunteers. I’m brand new and I think there’s a lot of other new hands on deck, which made a big difference. There’s some original volunteers that came back on too and the collaboration worked really well. We reached out to more people to join in on the parade this year-not just from the County but also from Belleville and Trenton.”

Despite its period of dormancy the parade in Consecon has come back with a bang. In previous years, it was a ten minute event. This year, as Laird points out, it was close to 30 minutes with a variety of new floats. And, in an unusual display, close to 200 people flanked the streets of the village, the population of which is just upwards of 2,600.

Despite any challenges, the Christmas in Consecon Sub-Committee proved many hands make light work, and Consecon is once again on Santa’s map.