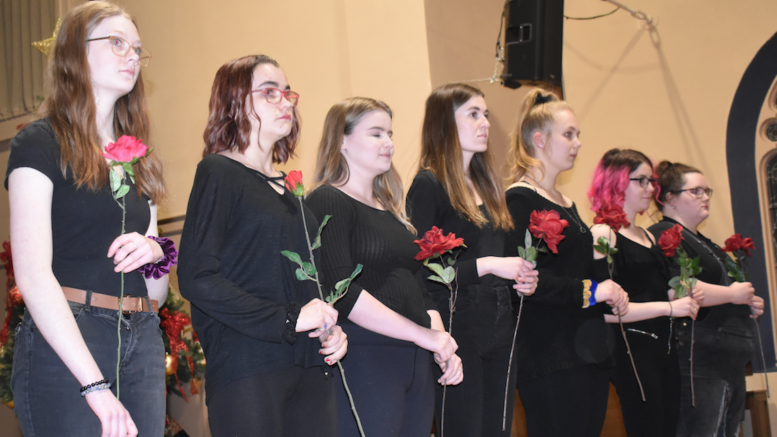 The deadliest mass shooting in Canadian history was an act of violence against women. That shooting, now known as the Montreal Massacre, took place 30 years ago on December 6th. Now, this tragedy, and others like it, are remembered through acts of commemoration that take place across the country each year to honour victims of gender-based violence (GBV).

Locally, Alternatives for Women brought the public together Friday at St. Andrew’s Presbyterian Church to reflect on GBV and commemorate 14 lives lost. They drew a crowd of close to 100 people, nearly filling all the seats in the church.

At a time when the global rates of GBV are on the rise, this commemorative event has become a reminder not only of how deadly this type of hatred can be, but also that it can happen close to home.

“14 women died that day (at École Polytechnique) and it’s a reminder of why we’re doing the work we’re doing with working to end violence against women,” said AFW Executive Director, Leah Morgan. A SOMBRE BOUQUET – Nora Sebane reaches for a rose, while onlookers stand in silence, during the annual rose ceremony to commemorate victims of gender-based violence. (Sarah Williams/Gazette Staff)

Part of the evening included a rose ceremony, one of many held across Canada, wherein red roses were placed in vase, one by one, to commemorate the victims of GBV.

“The rose ceremony has been conducted across the country for 30 years. Just in the past 10 years or so, we started including all the women and children who have been murdered in Ontario within the past year,” stated Morgan. “I know we used to focus on (GBV victims) nationally, but the numbers are so high that we can really only recognize the women in Ontario. This year alone there were 34 women and three children murdered.”

When asked how this year’s event differed from that of previous years, Morgan noted that they invited drama students from Prince Edward Collegiate Institute to perform a reflective piece for the audience.

“They draw their own crowd,” mused Morgan. “Their presentation is pretty powerful. They’ve done a presentation in the past and they do it in other communities.”

The piece involved direct quotes from students from the school system as well as from the internet as a way to give a voice to those who have been affected by GBV.

GBV can take many forms, including cyber abuse, economic abuse, emotional abuse and more. It can affect anyone, regardless of demographic.

Some local victims shared their stories of domestic violence, further cementing the fact that such violence exists in our own community.

“Many people believe that only certain types of women are affected by gender abuse violence, but in actuality, these victims come from all different walks of life,” stated Morgan. “Some were professionals, some were students, some were homemakers. Some were wealthy, some not so much. They ranged in age from 6-94. Gender based violence affects all types of women and most women have feared for their safety at some point in their life.”

Morgan encouraged the audience not only to mourn the victims of abuse, but to advocate for more action to be taken to stop such tragedies from occurring.

“Let’s make this day not just about remembrance and mourning but also a call to action, a reminder why violence against women continues to require attention, advocacy and change,” said Morgan.

“Some of the recent policy changes are concerning for us and we must be vigilant to make sure all victims are safe and secure and have the support from all levels of government. So get out there and make your voices heard. Speak up when you hear your friend make a misogynistic joke, sign petitions etc. And, if you know a woman who might be at risk, tell her that you’re concerned about her safety and tell her about the different ways she can get help,” implored Morgan.

For more information about Alternatives for Women, please visit:https://www.alternativesforwomen.org/ or call (613) 476-2787.