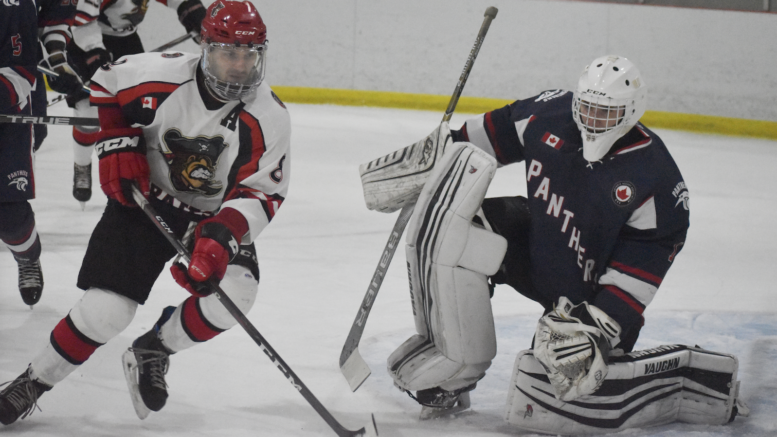 It could go down as the third period rally that saved the season for the 2019-20 Picton Pirates junior hockey club.

Down 3-1 with under 15 minutes to play in the third period to the Port Hope Panthers Thursday in what was a four point game and virtually a must win for the Pirates, the locals were in danger of dropping back of the Panthers and fourth and final playoff spot in the Tod division by ten points.

With 16 games left in the Provincial Junior Hockey League slate, such a margin might not have been completely insurmountable but no one would blame the County of Prince Edward if the controllers of the ice plant at Huff Estates Arena were thinking there might be some open Thursday nights after Picton’s regular season finale Feb. 13, 2020 against Gananoque.

But shortly after Mateo Cabral beat Picton starter Kyle Renaud at the 5:11 mark of the third, something happened to the Pirates.

While no one can really put a finger on it including their head coach, the club suddenly realized the sum of their parts equal a playoff contender and the locals turned the visiting Panthers on their ear.

Then, they took their act on the road and slayed the ‘Beast of the East’ Raiders in Napanee on Friday night and took down the Orr Division’s Eagles in Clarington on Sunday for a massive six point weekend.

The playoff hopes of the Picton Pirates are very much alive, thanks for asking.

Picton moved their record to 11-12-2, good enough for 24 points, just four back of the Panthers and six back of the third place Gananoque Islanders.

After Cabral made it 3-1 for the visitors on Thursday, Picton needed an immediate push back and it was their captain, the Picton native Will Harrison who was able to beat Port Hope starter Micheal Nckolav along the ice at 6:57 to get the Pirates to within a goal at 3-2.

Pirates head coach Tyler Green admitted he didn’t know exactly what sparked the Picton comeback other than the team just seemed to not get down after the Panthers’ third goal.

“I don’t really have an answer but I know this is a determined group now and they’ve found a new notch to elevate their game to,” Green told the Gazette Tuesday.

After Harrison lifted the club to within one, Picton wouldn’t have to wait long for the equalizer as the Khaden Henry show kicked into high gear and the Belleville-born freshman took over the game.

Cooper Rogers would spring Henry on a partial breakaway and the 17-year-old bulged the twine 11 seconds after Harrison tallied to make it 3-3.

Both teams would have power play chances midway through the frame but neither club could score.

Tied 3-3 with under five minutes left in the contest, Brian Bygrave would spot Henry in the slot and another shot along the ice would beat Nckolav with 4:35 to play. 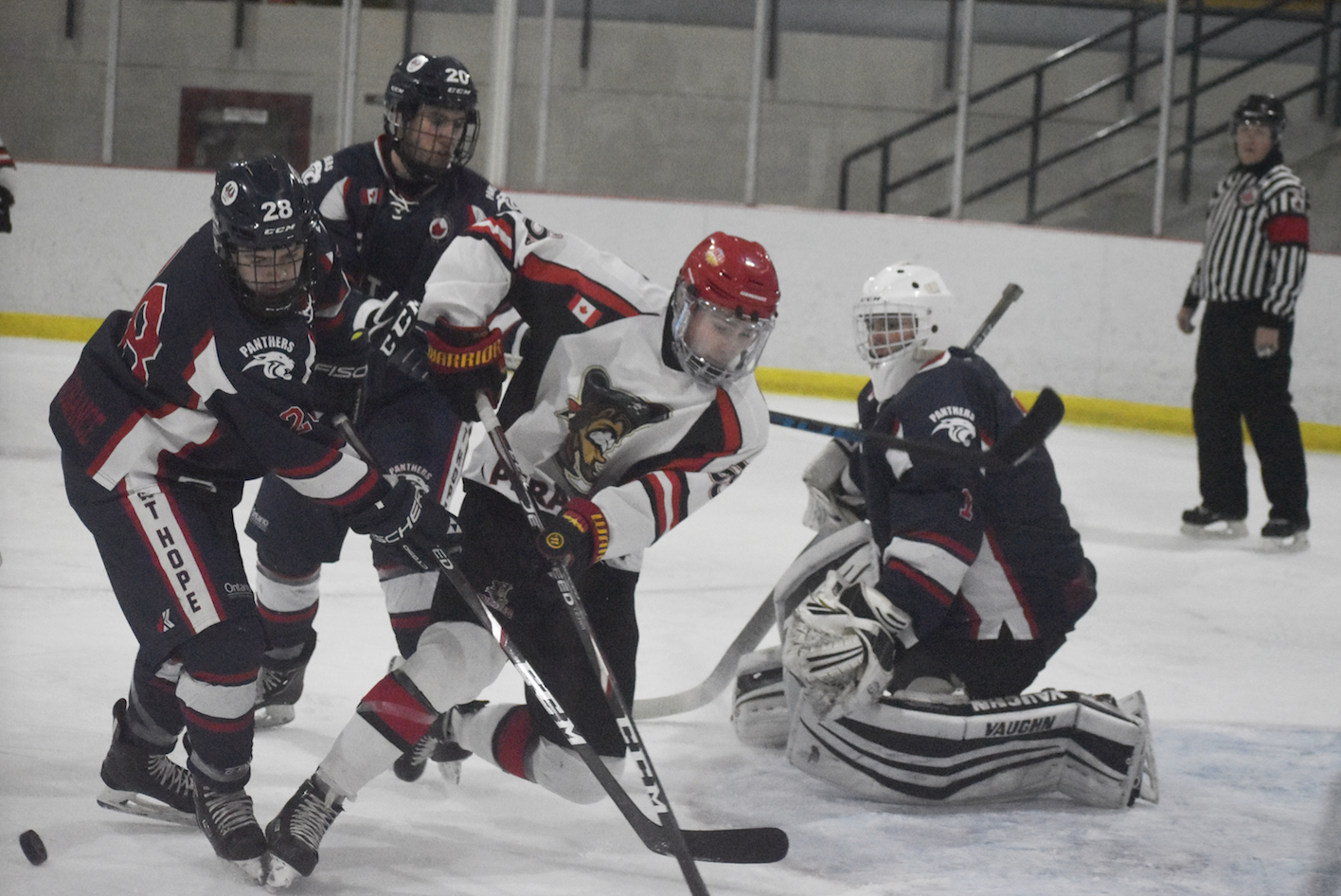 With under two minutes left, Henry would cap off a natural hat trick effort with a beautiful goal, accepting a Jacob Dietz pass and dekeing Nckolav before depositing a backhand into the top of the Port Hope net with 1:52 left in the contest.

Green said the rookie has been ‘Tremendous’ for the hockey club this season.

“He’s a very quiet person, he doesn’t get too fired up about things but he just goes out there and finds the time and space to make things happen for us,” Green said.

Up 5-3, Port Hope tested Renaud a couple of times down the stretch but couldn’t find day light between the Woodlawn, ON native and the Picton goal line.

Whatever elixir Picton was sustaining themselves with Thursday was bottled and brought to Napanee and the Strathcona Paper Centre on Friday night.

Pirates netminder Eric Tessier was the star of the night for the Pirates lest their captain as the Kingstonian was beat just one time on 50 Raider volleys.

“He was dialled in, that’s for sure,” Green said. “He was tracking the puck really well and made sure any rebound was steered to the quiet areas. Full credit to our defence as well, they made sure the majority of shots came from the perimeter and they protected the house really well. Everyone was clogging the lanes and blocking shots as well and it was a full team effort in our own end but Tess was there when we had the break downs.”

Napanee’s Liam Mroueh would take a Nic Case set up with under a minute to go in the first period to send stuffed animals to the playing surface as the Raiders were hosting their teddy bear toss event.

It’s a good thing for the toy drive organizers that Mroueh was able to find the range in the first because Tessier was more than equal to the task the rest of the way.

Down a goal heading into the third, Picton found themselves in familiar territory in their last two visits to Napanee- down a goal in the final stanza to the defending Schmalz Cup champs only to come away without any points.

Considering the Raiders had lost just once on home ice prior to Friday’s game, the Pirates might have been squeezing their sticks as time wound down on Friday night but it was again the club’s captain who made the magic happen.

Harrison would convert a Kurtis Wood feed at 11:39 of the third to bring the Pirates back to even at 1-1.

Taking the puck in the slot area, Harrison spun to the net and fired a puck low to beat Maracle. 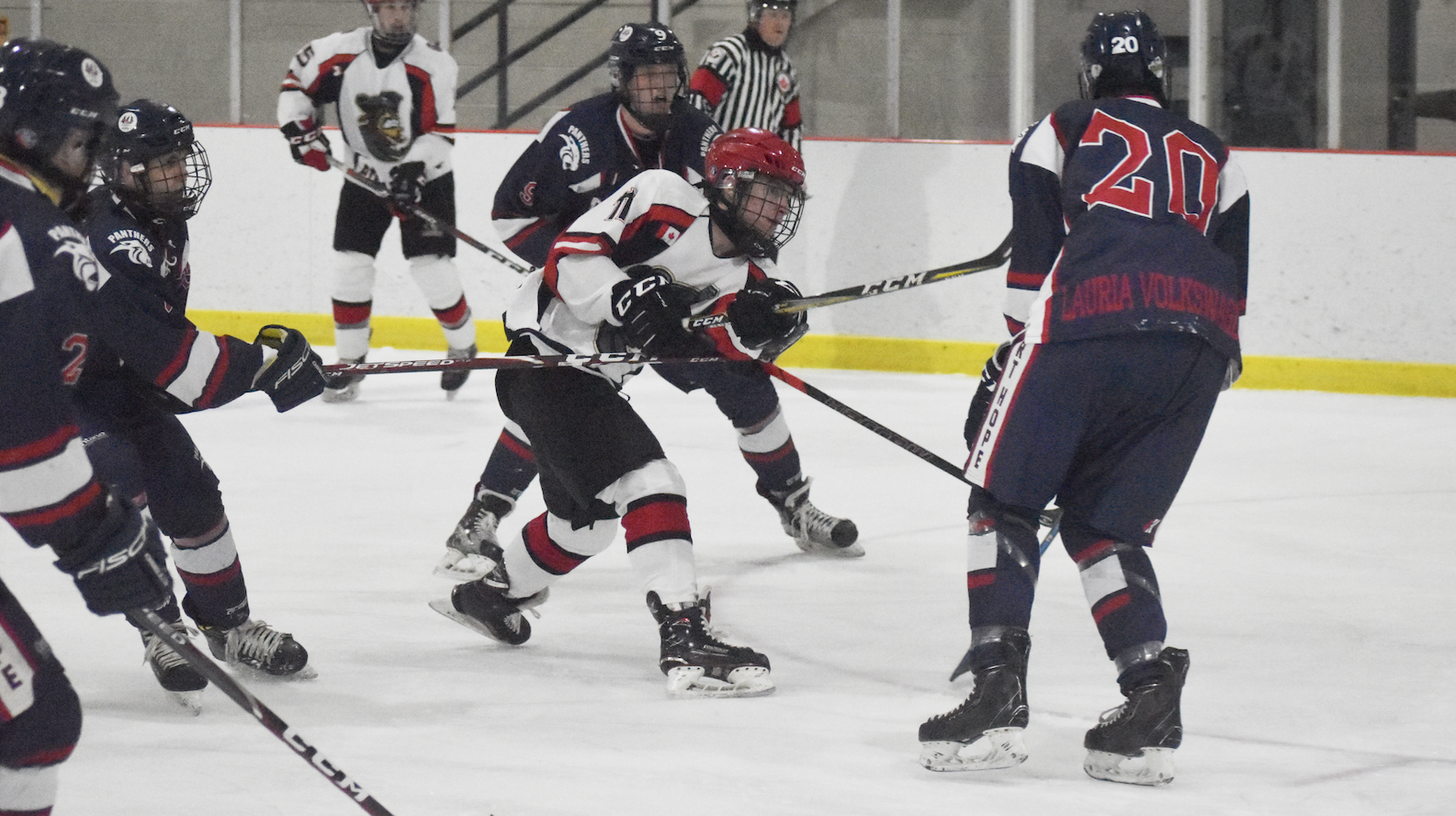 It was a controversial finish early in overtime as Harrison would pick up the puck at the Napanee blue line and bust in on Raiders netminder Bailey Maracle all alone.

Raiders boosters will swear that a Picton skater interfered with a Napanee back checker and the play was offside but no official on the ice raised their hand.

In on Maracle, Harrison went to the backhand and flipped the puck over an outstretched glove hand of Maracle at the 1:05 mark to give the Pirates a much needed extra point and send the locals streaming onto the ice to embrace their leader.

On Sunday, Picton would need to play comeback for a third straight game but managed that task admirably to pick up their fourth straight win and third victory of the weekend.

“On Tuesday, we talked about putting up a six point weekend and that was setting the bar high but the guys were jumping at the opportunity to come home with the full compliment of points on Sunday,” Green said.

Tied 2-2 in the third, The Eagles lurched ahead with a Joe Cole goal 3:34 into the frame but the Pirates produced a solution thanks to their checking unit.

Owen Dever, who banged home Picton’s first goal of the night in the second period of Thursday’s win. set up Tristan Cowan at 14:09 of the third to get the score to 3-3.

Garrison Moore picked up an assist on the play-the Belleville native’s fourth point in four games.

Needing a game breaker in the final five minutes, the Pirates turned to a familiar face in Henry who would beat Eagles netminder Alex Lepizzera with 4:49 left to give the locals their first lead of the game.

For Henry, the game winner was his second snipe of the contest and his third game winner of the season.

Picton would salt the game away in the final minute as Bygrave added his second assist and third point of the game, sending Harrison in alone on an empty net.

Picton’s fifth tally of the contest was Harrison’s eighth goal in four games.

In all three wins this weekend, Picton utilized big third period efforts en route to victory and Green called it a character building weekend for the team.

“On the bench we were saying good teams find ways to win and that’s what we accomplished this weekend,” the coach said. “There discovered  some key building blocks for sure.”

Picton welcomes Amherstview on Thursday night and then travels to Georgina on Sunday afternoon for a contest with the Orr division Ice.