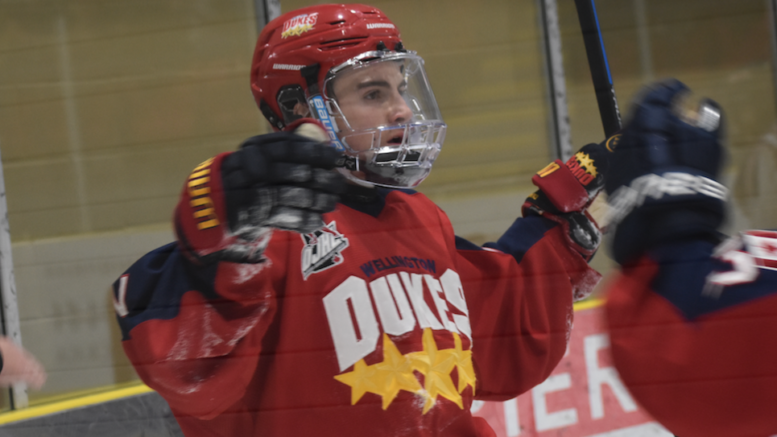 A pair of goals by Wellington's Joel Gagnon wasn't enough to lift the Wellington Dukes to a road victory in Buffalo Wednesday night. (Jason Parks/Gazette Staff)

In order for a hockey club like the Wellington Dukes to go unbeaten over the span of 16 games in a league as competitive as the Ontario Junior Hockey League, a lot of things have to go right.

Being the benefactor of good bounces and breaks, an accommodating schedule and getting a timely call here and there can go a long way in keeping a hockey club on the right side of the ledger.

In order for a hockey club as skilled as the Wellington Dukes to go winless in four games in the OJHL, a lot of little things have to go wrong.

Lack of focus, bad breaks and not competing for a full 60 minutes are generally the ingredients of an unsuccessful stretch of hockey.

After tearing up the OJHL for the better part of two months and completing the former, the Wellington Dukes are struggling with the latter.

For Wellington Dukes coach Derek Smith, the idea is the club started to develop some bad habits during the time of wine and roses that went unnoticed because critiquing wins is generally not a useful or well accepted practice in junior hockey.

But those warts sure are noticeable in Wellington’s most recent body of work.

“There were three tough road games and I think the bad habits were developing during our streak came through,” Smith told the Gazette Tuesday. “We’ve lost our focus and our team identity over the last little bit. When we compete, when we bring the intensity level, we are a hard team to play against and we weren’t that last week.”

Wellington took a mid-week sojourn to Buffalo and lost a penalty filled affair to the Jr. Sabres 7-5.

The hosts would end up three-for-nine on the power play and it was a Logan Tobais man advantage marker early in the third period that broke a 5-5 deadlock.

The Dukes would have chances to even the score late in spite of the fact the Jr. Sabres strangely didn’t take a penalty in third period but Wellington was unable to beat Buffalo starter Luke Pavicich with any of their 11 shots on goal.

With starter Matt Dunsmoor lifted for an extra attacker late, Buffalo would send the puck into a yawning Wellington cage to seal the win for the hosts and make the final 7-5. Jake Gagnon paced the Wellington attack with a pair of goals while Quinn Hanna, Ben Woodhouse and Jacob Vreugdenhil all had single markers.

After travelling back to the Quinte region after the Buffalo game, Wellington was back on a bus heading west on Friday to take on the host Burlington Cougars, a team sitting two points back of the Oakville Blades in the OJHL’s West division.

The teams played back-and-forth all night as the Dukes answered the Cougars through out of the first two periods.

After former Duke Brendan Rylott set up Matt Hobbs to open the scoring at 6:12 of the first, newcomer Justin Paul potted his first as a Duke at the 11:01 mark to make it 1-1.

The Cougars would again pull in front moments later but Dan Panetta scored his 11th of the season to make sure the teams were tied 2-2 heading into the first intermission.

In the second, the Cougars again pulled in front at 3-2 but a Ben Woodhouse power play goal midway through the contest tied the affair at 3-3.

But that was all from the visitors on a rare Friday night away from Lehigh Arena.

Harrison Cottam’s second goal, this a power play marker at 11:51 put the hosts ahead to stay.

Another Burlington goal in the third made the score 5-3 for the Cougars and an early pull of Wellington starter Matt Keeley led to a Joel Holtrop empty net goal at the 17:51 mark, making the score 6-3.

On Saturday, the Dukes were in Georgetown to take on the West division’s fourth place Raiders.

In a high-flying affair, Wellington and Georgetown would combine for 101 shots on net as OJHL vets Nathan Torchia and Dunsmoor put on a goaltending display.

After scoreless first where Wellington outshot the hosts 20-18, the Dukes got on the board first when Quinn Hanna’s drive from the blue line snuck past Torchia at 7:21 of the second.

The Raiders responded with a pair of Nolan Dann goals in the last half of the second that were set up by former Duke Graeme McCrory.

Up 2-1, the Raiders added to their lead in the third as newly acquired Rhys Chiddenton paid dividends for the hosts after getting picked up from the Timmins Rock of the Northern Ontario Junior Hockey League.

Chiddenton’s volley at 5:20 would elude Dunsmoor and the goal would be the eventual game winner.

Wellington did battle back and a Dawson Ellis tally set up by Brett Humberstone at 9:52 gave the Dukes a full ten minutes in which to find an equalizer but Torchia was sensational in the Raiders net, denying any shooter that came his way.

In terms of figuring out why Wellington has been on the wrong side of the score in the last four games dating back to a 3-1 set back at the hands of the Cobourg Cougars Fri. Nov. 29, Smith said everyone in the Wellington line up was accountable in some way however the defensive breakdowns haven’t been able to be papered over by Keeley and Dunsmoor as they might have been earlier in the season.

“Both guys have been outstanding for us for sure but it’s matter of everyone playing their role and doing their part to make the team successful and that’s not happening right now,” Smith said. “We need to work the process, have three good days of practice and be prepared to battle the Tigers on Friday night.”

With their current skid, the Dukes (24-7-2, 50 points) have fallen into second place in the East Division and are two points back of the Trenton Golden Hawks.

Wellington hosts Aurora and then travels to Whitby on Tuesday for a mid-week road game against the Fury.