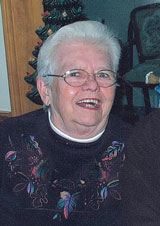 Beverley Jacqueline Beaton (Welsh)
Member, Royal Canadian Legion, Br. No. 78, Picton – Peacefully entered into rest at Hallowell House Long Term Care Facility, Picton, on Thursday, December 5th, 2019. Bev Beaton (formerly Bev Turner) of Picton died at the age of 86. She was the daughter of the late John & Esme Welsh. Bev was the wife of the late Jim Turner and the late Eric Beaton. She is survived by her companion Russ Miller of West Lake. Bev is the loving mother of David Turner (Shelly) of Demorestville, Paul Turner (Pat) of Picton and Lisa Burns (Peter Beimers) of Bloomfield. She is remembered by her grandchildren Adam, Crystal, Chad and Craig and predeceased by grandsons Justin and Christopher. Bev was the great grandmother of Keira, Keaton, Race, Charlotte, Corbin, Dwayne and Emma. She is predeceased by her sister Shirley Stewart and remembered by her nieces and nephews. In keeping with Bev’s wishes, there will be no visitation. Cremation has taken place under the care of Quinte Cremation & Burial Services, 2-205 North Front Street, Belleville (613-962-7900). A Celebration of Bev’s Life will be held at a later date. If desired, donations to a charity of your choice would be appreciated. Online condolences at www.quintecremationservices.com