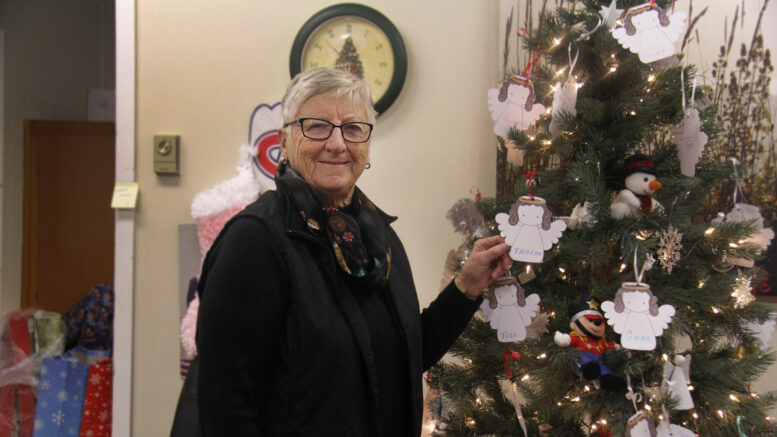 ANGELS AMONG US Children’s Foundation Angel Tree organizer Susan Rose with one of several angels still hanging on the tree at the campaign office in 2019. (Desirée Decoste/Gazette Staff)

The annual Children’s Foundation Angel Tree Campaign has been a staple in a lot of peoples lives in Prince Edward County with the campaign being run now for over 30 years.

Almost every year since the campaigns inception in the early 1980’s, the angel behind the Angel Tree Campaign, Susan Rose, has poured her heart and soul into making sure every child has a very merry Christmas in Prince Edward County.

Unfortunately this year is really illustrating just how tight times can be for families struggling to get by in Prince Edward County.

Governed by The Children’s Foundation, an arm of Highland Shores Children’s Aid, for the first time in the campaigns history, Rose is nervous with the amount of angels left hanging on the tree.

With Christmas just around the corner this heartfelt campaign has had an alarming number of people registering late, whereas in previous years, a lot of applications came in the middle of the campaign.

“As a coordinator I’m getting nervous,” expressed Rose. “I’ve done this for over 30 years and this year I’m getting a lot refereed in later and I’ve never had this many people apply. Either they’re just hearing about it, they weren’t aware of it or they just have to suck up their pride and apply.”

Even with the over flux of applications Rose stated it feels like a normal year.

“I’ve done 300 kids before and that was a massive year,” Rose said. “And this year it just seems normal and we’re at 309 plus more because more are still coming in and need to be registered.”

Napanee Tri-Board is among the newest business wanting to donate money to the campaign.

Last year for everyone who donated to the campaign, an angel pin was received.

This year, as the kids have spoken, a purple ball with the angel tree logo and name will be given as a token of appreciation.

“Last year for the campaign we had pins to hand out to people who donated,” said Rose. “This year we brought the bulb back because the kids like to go home and write the year they donated and fill the tree with purple bulbs.”

Delivery date is still scheduled for Dec. 19th and donations are greatly appreciated.

If your interested in donating please visit the Foundation’s office at 56 King Street in Picton, many angels are still hanging on the tree.