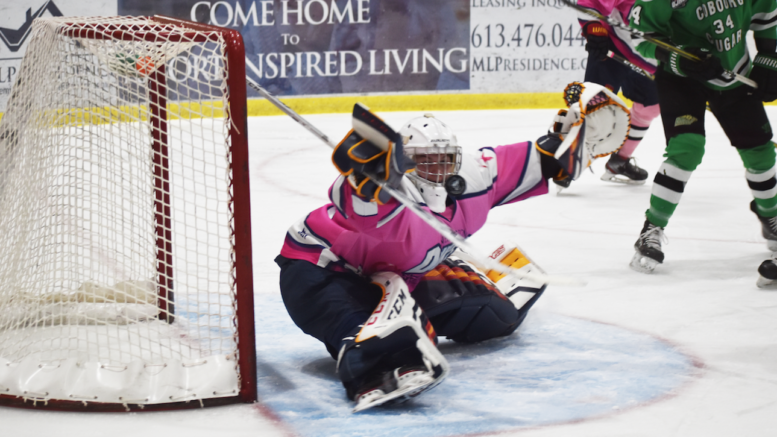 The 18-year-old from Guelph went 16-12-2 for the OJHL’s Burlington Cougars last season and played his midget and minor midget seasons in the Guelph Jr. Gryphons AAA program and bantam with the Vaughan Kings of the GTHL, respectively Dunsmoor played one game with the Ontario Hockey League’s Mississauga Steelheads last season.

He was an eighth-round pick of the Steelheads in the 2017 OHL draft.

Wellington Dukes Head Coach Derek Smith has had high praise for the netminder who tends the Wellington goal along with rookie Matt Keeley.

“He’s been a rock back there for us,” Smith said of Dunsmoor recently. “When he’s on his game, which seems to be all the time, the team has confidence we are going to be successful.”

Christian Mattiace of the Toronto Jr. Canadiens was runner-up to Dunsmoor as the Goaltender-of-the-Month. The Woodbridge native went 6-1-0 during November, posting a 1.85 GAA and a .930 save percentage.

In other league awards, North York Rangers forward Cole O’Hara was the South-East Confrence Player-of-the-Month for November while Burlington Cougars froward Matthew Gianni was best in the month of November in the OJHL’s North-West Confrence.

O’Hara tallied 18 points during 10 games. The second-year forward’s seven goals included two on the power play, one while shorthanded and a game-winner. The Richmond Hill resident is tied for fifth in the OJHL points race with 41 (11assists/30 goals) in 29 games. O’Hara, 17, is playing for Team Canada East at the World Jr. A Challenge in northern B.C. this week.

Cameron Gaylor of the Trenton Golden Hawks was runner-up to O’Hara as the South-East Conference Player-of-the-Month.

Gianni had 15 points during 10 games. His league-leading 10 goals included two on the power play and two game-winners. He was assessed one minor penalty during the month. In his first season with the Cougars the 19-year-old from Stoney Creek has amassed 18 goals and 22 assists during 30 regular season games. He had 30 points during 50 points with the OJHL’s Brantford 99ers last year.

Patrick Brown of the Collingwood Colts was runner-up to Giannini as the North-West Conference Player-of-the-Month.