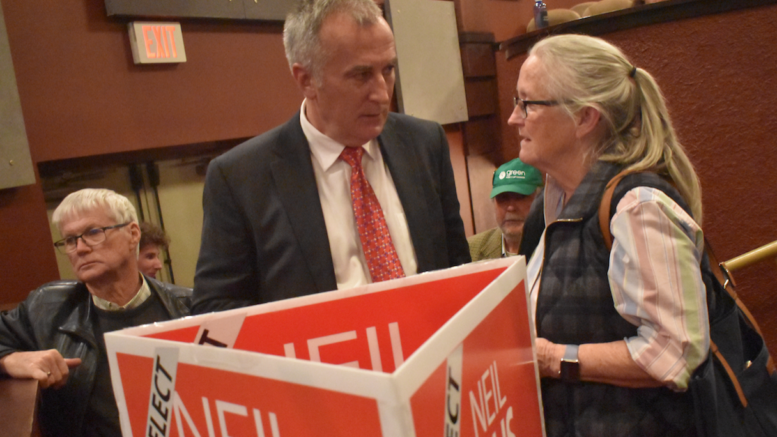 Bay of Quinte MP Neil Ellis has been appointed to a portfolio he can “grow” into.

On Thursday, it was announced in Ottawa by the Government of Canada that Ellis was selected by the Right Honourable Prime Minister of Canada Justin Trudeau to serve as the Parliamentary Secretary for the Honourable Minister of Agriculture and Agri-Food Canada, Marie-Claude Bibeau.

In a statement, Ellis said he very excited to work with the Minister and representative of the Quebec riding of Compton-Stanstead promoting and furthering Canadian agriculture and working with producers and industry leaders in the agri-food industry.

Ellis added the Quinte region has a deep history when it comes to agriculture -not only with a great number of farmers working on the land but also at the Ministerial level.

Reflecting on the riding’s historical contributions to this Ministry, MP Ellis remarked that “it’s a very nice reminder of the work that our former MP, Lyle Vanclief undertook when he served as Canada’s Minister of Agriculture.”

“This moment is really humbling. I’m very honoured to follow in the footsteps of former MP Vanclief and to also have the chance to stay grounded in the top issues that affect not only the Bay of Quinte riding, but every riding across the country; at the end of the day, we all need to eat, so making sure that the people who grow and get that food to our tables are best supported is really going to be an exciting role. I look forward to it,” Ellis said.

Then known as the Prince Edward—Hastings riding, Vanclief’s professional background in agricultural sciences brought a depth of expertise to multiple roles during his elected terms of service as a Member of Parliament in 1988, 1993, 1997 and 2000; including Opposition Critic for Agriculture to Parliamentary Secretary to the Minister of Agriculture.

Ellis looks forward to filling this familiar role to our community and will be happy to lean on Lyle and seek his expertise and advice on the file.

Although the riding’s boundary and name has changed since that point in time, MP Ellis notes that the Bay of Quinte’s “key needs are still the same in this sector.”

“We are always asking: how do we produce the best agri-food products, using the most efficient means? How can we keep our food and water sources safe? How do we optimize accessibility to these products and sustain existing or expanding markets? These are still the core questions that guide the work of our farming community members; and that of our Standing Committee on Agriculture and Agri-Food (AGRI) and also the department,” Ellis said.

MP Ellis formally thanked the Prime Minister for entrusting this responsibility to him. In this new position, MP Ellis is excited and ready to support the important work undertaken by the Ministry, and by the Canadian Food Inspection Agency, Farm Credit Canada, the Canada Grain Commission, the Canadian Dairy Commission and the National Farm Products Council.

In a statement, Vanclief offered congratulations to the Bay of Quinte MP on his appointment.

“Congratulations Neil, your leadership skills and experience have been recognized and will serve you well in your new role. The Agriculture and Agri-food industry is large and complex as it deals with one in seven working Canadians from the primary producers to consumers but you are up to the task to help shape the future of the industry,” Vanclief said.