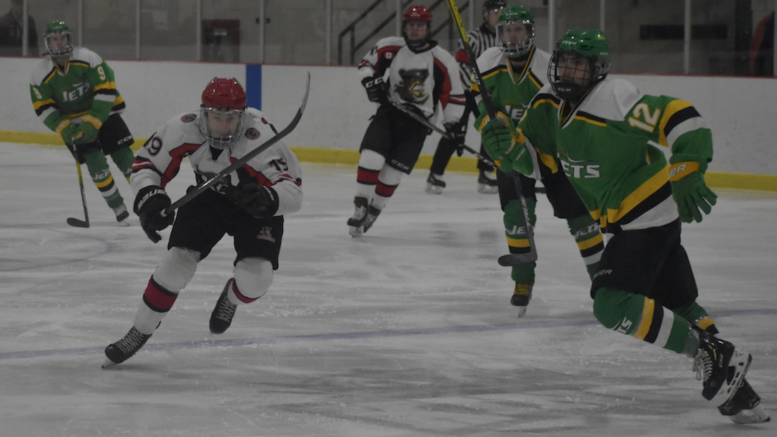 The hard-charging Picton Pirates rode a hot stick into the weekend and extended a winning streak in an attempt to gain ground on the field in the Tod Division of the Provincial Junior Hockey League.

The Pirates out lasted the visiting Amherstview Jets on Thursday night at home 5-4 before heading on the road and blanking the host Georgina Ice 7-0 Sunday afternoon. The wins moved Picton above the .500 mark for the first time since early October at 13-12-2 and the Pirates are now breathing down the necks of the Port Hope Panthers and the rest of the Tod Division field save league leading Napanee.

By virtue of their 28 points, the Pirates trail the Panthers by just three points and Gananoque by four points and Amherstview by six points.

Picton’s winning streak was extended to six games and the Pirates have interjected themselves back into the thick of the Tod Division playoff race.

Still one of the youngest teams in the PJHL, the locals were certainly guilty of playing with enthusiasm that bordered on reckless on Thursday night as the Jets fought back time and again to push the Pirates but, in the end, Picton had just enough to in the tank to get past the visitors in a thrilling back-and-forth affair.

Picton’s Brian Bygrave would open the scoring early in the first, combining with Landon McLellan on the game’s opening tally at the 4:14 mark.

Outshooting the Jets 11-8 in the first, the Pirates were guilty of not burying their chances early and letting Amherstview linger. Picton forward Nate Boomhower had a goal and two assists to lead the Pirates over the host Georgina Ice on Sunday. (Jason Parks/Gazette Staff)

In the second, Picton’s Kahden Henry would beat Jets starter Brady Sarazin clean at 5:39 to make it a 2-0 spread for the Pirates.

That margin didn’t last long for Picton however as Jets leading scorer Cody Smith was able to barge to the Pirates net and bat a rebound past Eric Tessier just 20 seconds later.

But the locals restored the lead as Bygrave took a Kurtis Wood pass to the corner, reversed his stride and rolled to the top of the circle to the left of Sarazin and fired a bullet past the Jets goalie, sending him to the bench in favour of backup Andrew Lumb.

Picton looked to be rolling and had a power play just over four minutes into the third period.

However, the locals, showing their youth, looked tentative and the Jet forward Hunter Chapman pounced on a loose puck, beating Tessier at 4:44 to get Amherstview to within a goal.

Picton restored the lead just under two minutes later as Will Harrison bunted home a Henry rebound past Lumb at 6:17.

Again the Jets battled back and Chapman out waited Tessier in the slot area at 10:57 to keep the heat on the Pirates.

With time winding down and the Jets activating the defence to press for the game tying goal, Picton caught a break with an odd man rush to the Amherstview end.

McLellan made a beautiful play to draw a defender close to him and then find a trailing Henry in the high slot.

With time and space, Henry would rip a puck past Lumb at 17:36 to again give the Pirates a key insurance marker.

With Lumb on the bench for the extra attacker for Amherstview, Henry’s second of the game and 21st of the season would stand up at the game winner as Raymond Benoit’s goal with 1:34 left in the contest made things interesting in the Picton end over the final 90 seconds of play.

But Tessier was solid, papering over any Picton defensive breakdowns with his acrobatics in the final moments of the contest.

The Kingston, ON native made 29 saves in picking up his seventh win of the season.

On Sunday, the Pirates travelled to Georgina to take on the Ice.

Picton was all business against the cellar dwellers of the Orr Division in a 7-0 whitewash.

Picton’s Griffen Conger was set up by Nate Boomhower 60 seconds in the game and it didn’t get any easier for Georgina starter Curtis Grant who bravely faced 68 Pirates volleys on Sunday afternoon.

Boomhower, who made his 2019-20 debut Thursday night for the Pirates, would pace the offence with a goal and two assists.

Picton had three power play goals on the afternoon with two them coming in the first as McLellan and Cole Lavender made it a 3-0 lead for the Bucs after 20 minutes.

Lavender’s power play blast at 11:13 was the  first goal of the season for the Wellington native.

Boomhower’s aforementioned first of the year in the second was Picton’s only scoring in the frame.

In the third, Conger would again score thanks to Boomhower and then Bygrave had a pair of tallies in the final ten minutes of the contest, bringing his goal total to five through a half dozen games.

Picton’s Kyle Renaud picked up the shutout for the Pirates, stopping all 28 Georgina shots sent his way.

The Pirates forgo their usual Thursday night home game this weekend for a Saturday night contest against the visiting Port Perry Mojacks.

On Sunday, Picton travels to Gananoque to take on the Islanders in their final game of 2019.