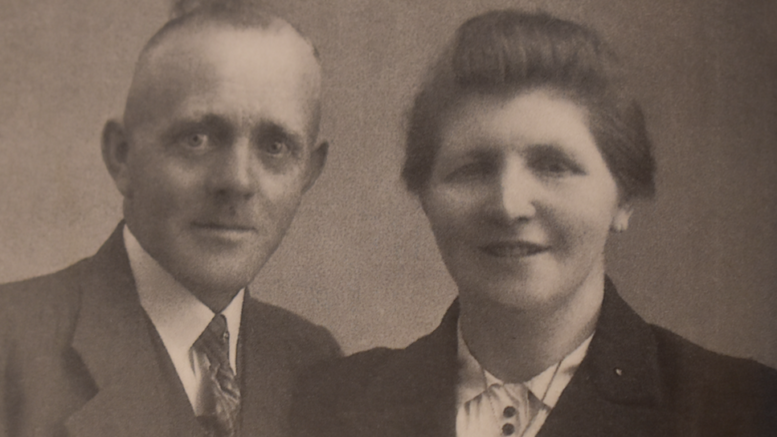 RISKING IT ALL Before emigrating to Prince Edward County, Bernard and Dora Prinzen and their family supported the Dutch Resistance in southern Holland in World War II. (Photo submitted)

In the early 1940’s, long before they ever dreamed of emigrating from Holland to Canada with their large family in tow, Bernard and Dora Prinzen were busy-busy growing crops, tending to livestock and children while under the thumb of an oppressive and brutal Nazi regime that was happy to pillage and terrorize the Dutch people and their resources to feed and oil the German war machine.

But the Prinzens were also busy secretly housing Allied airmen that had been shot down over Germany and were assisting as part of the Dutch Resistance. Within walking distance of the German border in the vicinity of the village of IJzerlo in the deepest south of Holland, this was death- defying work for the farmers and workers of the region that secretly waged an underground war against the occupiers.

On Christmas Eve 1944, it was arranged for minister from a neighbouring town to come to the Prinzen farm and hold a secret service for the clandestine fighters. A short time after the war was over, Rev. G.P. Klijn, pastor of the Reformed Church in Aalten, wrote about his experiences  of Dec. 24, 1944 and, presented to you, is a condensed version of those experiences with the hope you are reminded of the spirit of the season and the importance of celebrating Christmas (either as an observance of the birth of Jesus Christ or a way to remember good times spent at home with loved ones) was and remains important to those who serve.

There were stars in the sky, like there were in any other clear winter night. It seemed as if they were sending their twinkling messages of comfort and encouragement with even more dedication than ever before to the dark world below  After all, the upcoming days of advent for the people living above the rivers were going to be very troublesome.

There were also stripes in the sky. Stripes towards the south east. Narrow, white stripes of search-lights that stood quietly or cross-wise on the horizon or were carefully scanning the starry sky, searching for a solitary English pilot who might be cruising along the vast universe, breaking the stillness of this holy night with the distant, monotonous droning of his machine.

Stars and stripes in the night before Christmas. Under these divine and human adornments of the night – the stars representing comfort, the stripes destruction – we struggled through one of our Achterhoekse (Low Saxon) communities along the German border – struggling through a maze of sandy roads, farm yards and woodland, further and further away from civilization. However, my guide, the leader of the knockploeg (underground), was thoroughly at home here and all of a sudden we found ourselves opposite a guard, who stood ready with his sten gun. Behind him was the dark outline of a farmhouse silhouetted against the starry sky. 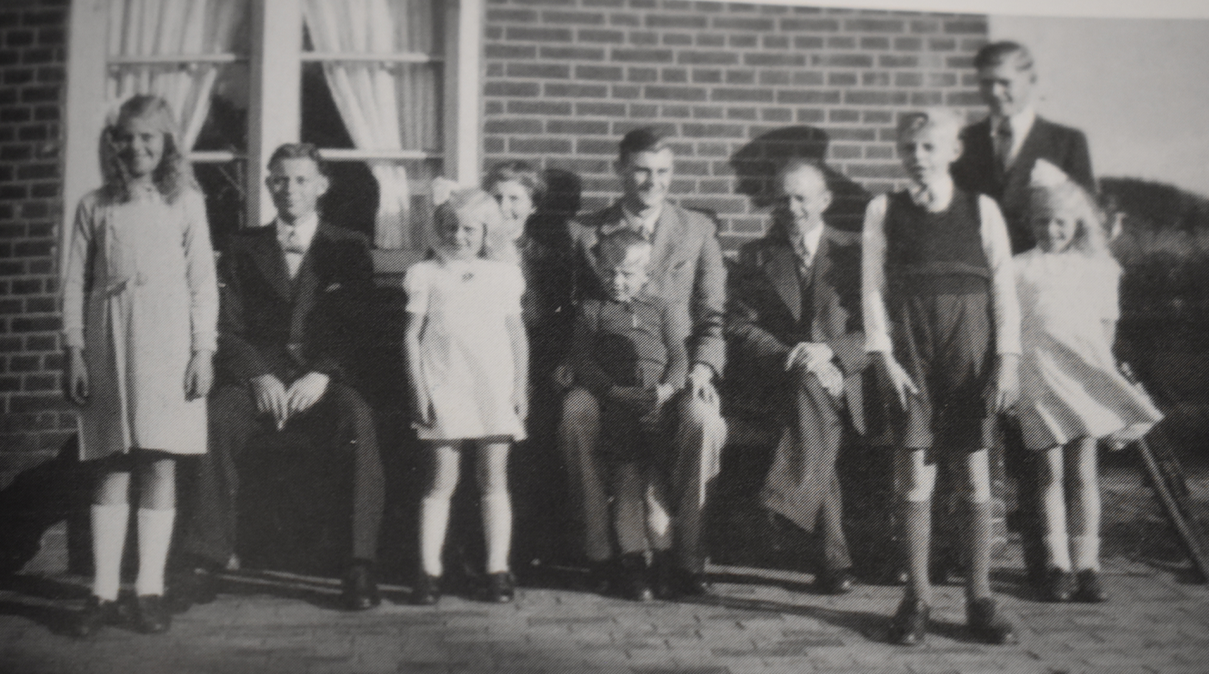 JOYOUS REUNION- (Seated) Downed-English-Airman-turned-Dutch-Resistance-fighter Frank Dell is flanked by  Dora and Bernard Prinzen with a young Ben Prinzen at his knee in this picture taken at the Prinzen farm outside of IJzerlo, Holland in 1946. Dell was one of seven airmen from the Commonwealth and the United States that lived hidden on the Prinzen Farm and fought with the Dutch Resistance against Nazi Germany in 1944 and 1945. (Submitted Photo/Dell Collection)

Inside the house it was warm and cozy with lots of people present. The farmer himself was there with his wife and a whole slew of children (The Prinzen family).

That farmer small of stature but a big hero, that farmer, who, on his remote farm hid for months a group of Allied airmen, along with an enormous amount of weapons and ammunition hidden under a load of hay in the barn. That farmer, who trained the children down to the youngest one to be silent. Children who were acting as if they were just among themselves as we sat amongst them.

Among the people in that room was also a municipal official who taught courses in resistance work in the broad vicinity. He had grown himself such a masterly moustache that I barely recognized him – however, that disguise being a dire necessity because he was a badly wanted man by the Germans Then there was “Zwarte Jan” (Black John) who already had four close calls with death but managed to escape each time  and several more, all people working in the underground. And there were those airmen, four Americans, one Englishman, one Canadian and one Australian who had abandoned their burning planes and had landed in German territory. After some wandering all these had found their way to the Prinzen farm with the help of the people of the resistance movement.

They sat there in that kitchen that night, all these fellows, so relaxed as if they were safely home. Their greatest pleasure at that moment was to sit with the farmer’s flaxen-haired boys and pig-tailed girls on their knee, chit-chatting with papa and mama and with the boys of the underground while generously sharing a box of pre-war cigars, all individually wrapped in cellophane, which they had received from some good patriot because of it being Christmas.

The Christmas story in that time of fear and uncertainty was read in many strange places that year – in hiding places, in shelters. But the story of the Saviour of mankind isn’t out of place anywhere! Certainly not in that simple farmer’s kitchen with its international circle of resistance fighters, driven together from all different parts of the world: “Achterhoekse” farm boys – severely hunted people who belonged to the resistance movement in Holland- underground navy people -personnel of the towns’ clerical department. Allied airmen from San Francisco and Florida, Brighton and Plato, Saskatchewan, Canada.

It was silent as if in a church when in that kitchen the familiar words of Luke 2 were read – first in the Dutch language, then in English. The emotions of these brave, self-assured men became tangible when the old familiar story came to them in their own language. So far from home, yet, the same Advent – “Today your Saviour is born in the town of David, the Lord Messiah.” And on the door of those hearts, that day and night were filled with thoughts of war and strife, now, in the silence of the night, knocked a different peace than the one they were fighting for — the peace of which the angels sang: “Glory to God in the highest and peace unto men who He favours.”

The people of the resistance had even managed to bring some English hymnals. And so the Christmas songs were sung in two languages, “Glory to God in the Highest” , the world-wide familiar “Silent Night, Holy Night” and others.

Stars and Stripes in the night before Christmas. But, for a moment, above all the flags that flew in each one of these hearts – the American, the British, the Canadian and the Dutch, the Christmas story of Luke 2 dominated – the story that speaks of a great joy that will be for all people, namely that for all of them was born a Saviour, Christ the Lord.

Three months later, the tanks of the British Army brought liberty and broke this community apart.  The Dutch boys joined the stock troops and traveled further into Holland, the airmen disappeared into the conquering army and for the farmer and his wife, that farmer, small stature but who was a big hero, peace had returned.

Whether you subscribe to God’s grace or fate, the rumble of the allied tanks into IJzerlo couldn’t have been better timed. The Schutzstaffel (SS) storm troopers were in the process of finding out exactly who was involved in Dutch resistance and surely the Allied airmen would have been discovered if not for the liberation of that section of Holland in late March.

In fact, suspected resistance leaders had been identified and the rounding up of these brave Dutch people (and almost certainly the Prinzen family en masse) was literally  hours away until British troops pushed their way through south Holland and into Nazi Germany proper.

After the war the barn where the allied men had stayed burned to the ground in a fire and the Prinzen family, perhaps inspired by tales of the western world from their secret house guests or inspired to look west for adventure, decided in the spring of 1948 to try their luck in Canada and that choice has positively impacted and changed the natural course of Prince Edward County for the better.