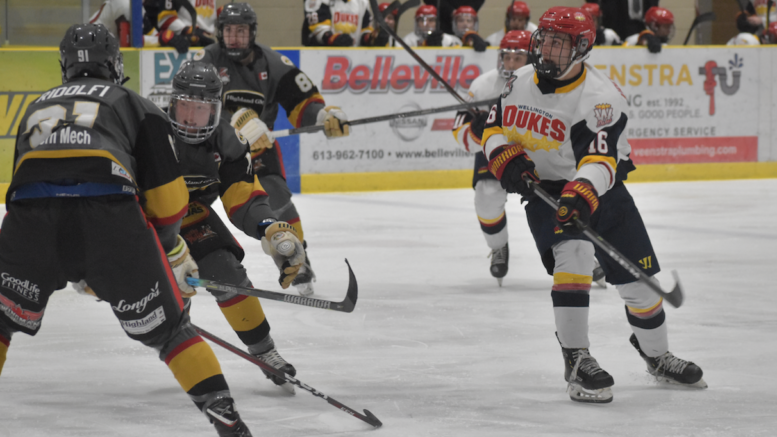 It took some last minute scrambling but the Wellington Dukes extended their winning streak to two on Tuesday night, outlasting the host Whitby Fury 4-3.

Ben Woodhouse would lead the way for Wellington(25-7-2), counting for a pair of Dukes tallies while Dylan Massie and Ben Evans also scored.

The Dukes looked to be firmly in control of the contest, leading 4-2 after two but a Curtis Abbot goal with just over five minutes to play made things considerably tighter at the Iroquois Arena in Whitby. But Matt Keeley was solid in the Wellington net, making 30 saves as he picked up his 11th win of the season.

On Friday, Wellington snapped a four game skid with a convincing 6-1 win over the Tigers thanks in part to a pair of two goals outburst by Ben Evans and Frank Vitucci. Wellington’s newest player Brodie McDougall, picked up from Collingwood early last week, had a tap in at the side of the net off a rebound to stake the Dukes to a 1-0 lead at 11:31 of the first.

Up 1-0 after one, Wellington extended their lead further early in the second as defenceman Brett Humberstone snaked his way to the slot and beat Tigers tender Christian Fillipetti at 6:04.

Evans would make it 3-0 Wellington just over a minute later.

Dukes starter Matt Dunsmoor would suffer his only setback with 5:00 left in the second as Sebastien Tamburro counted for Aurora.

But Wellington’s Vitucci restored a three goal lead for Wellington with under two to play in the frame. Vitucci and Evans would score in the third period and Wellington would win the contest going away.

The Dukes will close out 2019 with a Christmas treat for local fans as they host the Trenton Golden Hawks on Friday at Lehigh Arena.