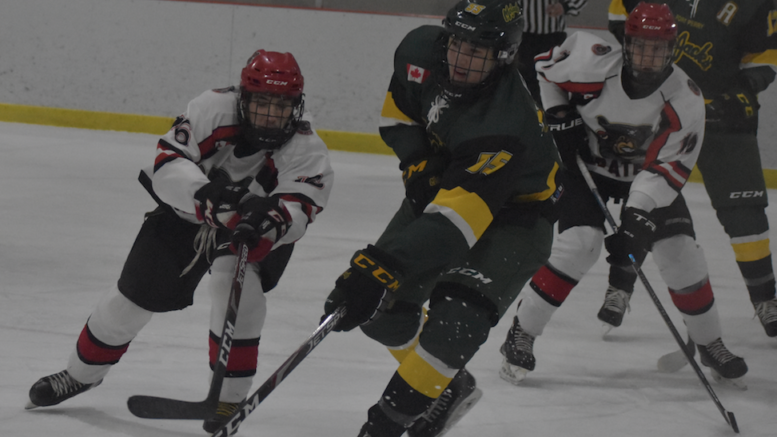 While they will enjoy the break and use the time to nurse some nagging injuries, you wouldn’t blame the red hot Picton Pirates if they were a little sad at the prospects of an 11 day layoff.

The sizzling Provincial Junior Hockey League squad put the wraps on 2019 this weekend by winning their seventh and eighth consecutive games to move to within a point of not only fourth place but also third spot in the Tod Division.

Just as Picton was skating off the ice in Gananoque after besting the host Islanders 4-3 in overtime to win their eighth in a row Sunday night, the Little Britain Merchants were shocking the visiting Port Hope Panthers with a Peter Kerr goal with just five seconds left in regulation to hand the Cats a tough, tough loss.

After the dust settled on Sunday night, the Pirates had moved their seasonal mark to 15-12-2, good enough for 32 points, just a point back of the Isles and Panthers who are tied for third place with 33 points.

Picton, without Brian Bygrave and Jacob Dietz in the lineup, playing in back-to-back nights after a rough 8-2 win over the Port Perry Mojacks a night prior, went into Gananoque and came out with the desired result.

And their coach couldn’t have been prouder of the effort by the locals.

“There’s a ton of character showing through in that dressing room. During this win streak there’s been times where lesser teams might have packed it in but these guys never get down, never let things affect their play and show that grit and tenacity they have,” Picton’s Tyler Green told the Gazette after Sunday night’s win.

As for the wind down, Green was ready for his charges to have a rest from the wicked pace the Pirates had been on over the last month. 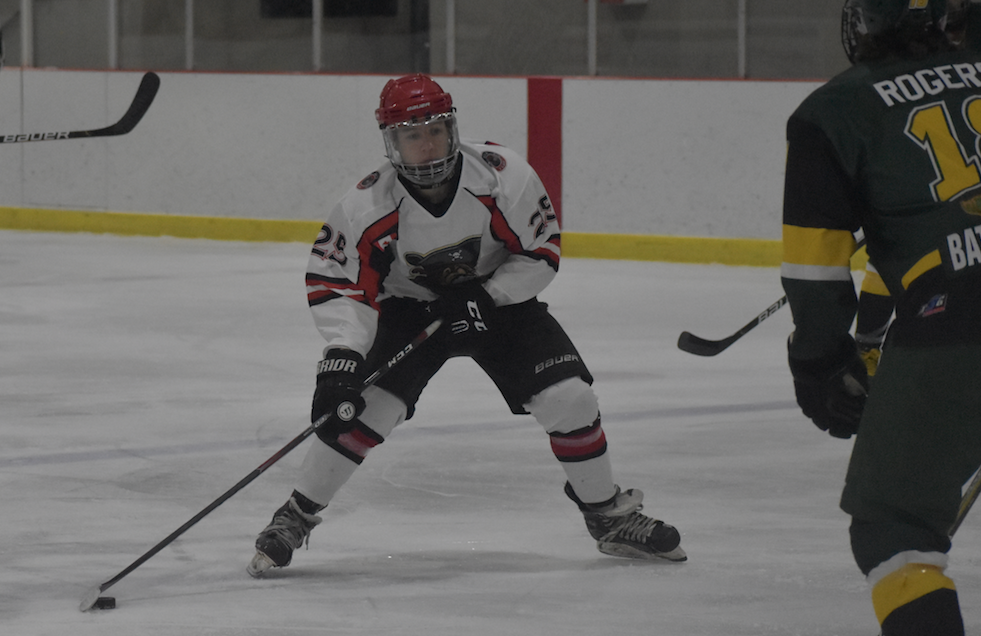 “I think the rest will be good. We should have everyone back in the lineup in the new year and we can be ready for that final push,” he added.

On Sunday Picton would outshoot the Islanders 61-40 in the game and the Pirates had the puck for most of the first and third periods but the game was tied 3-3 at the end of regulation.

It was former Pirates captain Devin Morrison scoring the game’s first goal to give the hosts a 1-0 lead after one and then Eric Lobrie beat Picton starter Kyle Renaud at 3:14 of the second to give Gananoque a 2-0 lead.

Then Picton, showing that aforementioned character and the grit they’ve exuded over the past month, turned the game on its ear.

Just over 60 seconds after Lobrie scored, former Isle Dawson Lindsay fed Khaden Henry to get Picton on the board at 4:19 of the middle frame.

At the midway point of the period, it was the duo combining again for a Picton goal and Henry’s 25th of the season in his 28th game not only tied the contest, it moved the Belleville native into the Tod Division lead for most prolific goal scorer.

Henry’s 25 lamp lighters lead Port Hope’s Corey Saman by one as the clock winds down on 2019.

Not bad for the 17-year-old Quinte Red Devils graduate who quietly goes about his game, finds spots on the ice to manoeuvre and shoot from and is deadly with a wrist shot.

“He’s been incredible for us so far,” Green said. “His skill and talent at this age is rare at this level and we are lucky to have him in our lineup.”

Picton would grab their first lead of the game at 13:31 as Nate Boomhower found a hole in starter Jeremy Piazzi to push the Pirates ahead 3-2.

The Isles responded just before the end of the frame with a Roman Cannell goal that tied it up at 3-3.

Although Picton would blast away at Piazzi in the third, the Pirates were unable to pull ahead.

In overtime with three skaters aside, it was Griffen Conger spotting an open Kurtis Wood 82 seconds into the stanza.

The Prince Edward County native would move in on Piazzi and wire the puck betwixt the legs of the goalkeeper and the puck trickled over the Gananoque goal line for the winning tally. 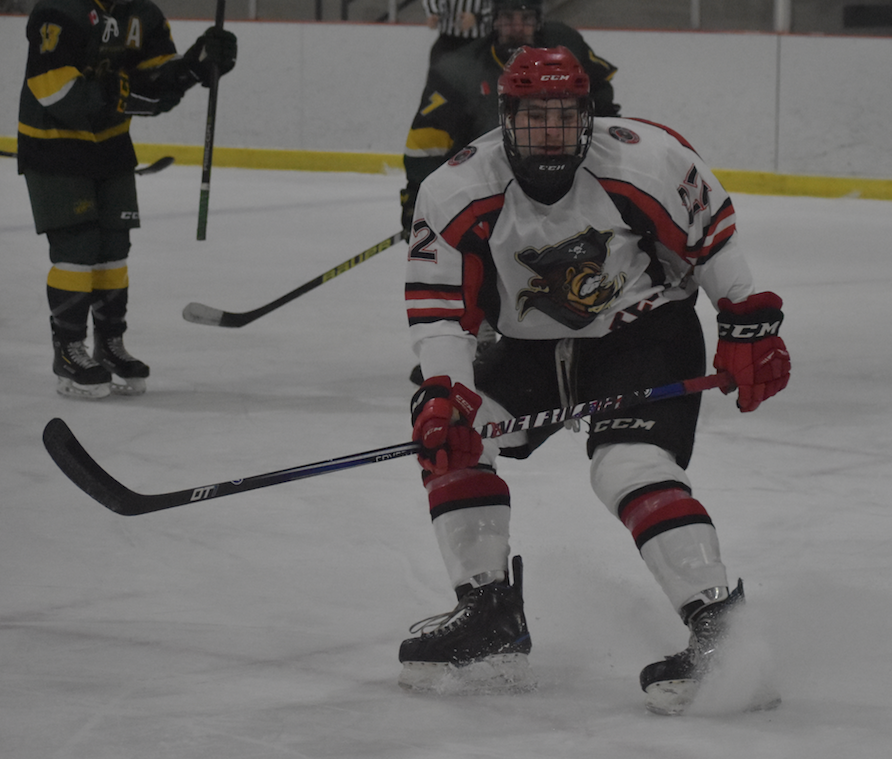 It was perhaps fitting that Wood found the game winner on his stick as he, Nick Kyte, Cole Lavender, Cooper Rogers and Aiden MacDonnell have been drawing more offensive parts out of their talents with the loss of puck-moving Dietz.

“Everyone is really stepping up on that blue line right now,” Green added. “Guys like Lav and MacDonnell are filling huge roles for us.”

On Saturday Picton won a rough and tumble affair going away but the Pirates did pay a price for the physicality extolled by the visiting Port Perry club.

Wood’s first goal of the weekend would come in the first period as he converted an Owen Dever feed at 12:47 to tie the game 1-1.

Picton would pull ahead in the second as Henry out-waited Mojacks starter Nicholas Dicks and went top shelf at the 12:51 mark.

That 2-1 lead lasted exactly five seconds as Garrison Moore danced into the Port Perry zone and picked the corner of the Port Perry net to stun the Mojacks and make it a 3-1 lead.

In the third, the Pirates cranked the offence into overdrive causing the Mojacks to swing the lumber and chase the hosts around the ice.

Will Harrison’s power play goal off a nice Conger pass at 3:27 made it 4-1 Picton.

Just under four minutes later, Nick Kirby-Palliser would beat Dicks to the loose puck near the Port Perry net at 7:24.

The Mojacks got one back as Blake Kelly’s point shot off the draw beat Renaud clean at 8:07.

But if the visitors had an idea of mounting  a comeback, it was erased at the 8:48 mark as Spencer Robinson levelled Moore with a dirty head hit in the Picton end that left the Belleville native prone on the ice for several minutes.

Although he returned to the Picton bench, Moore left the game early and was unavailable to suit up on Sunday night.

With a five minute power play, Picton went to work to embarrass the Mojacks for their hijinks and Harrison bagged his second of the frame at 9:25.

Later in the third, it was Conger swatting his 16th of the campaign home to make it an 8-2 final.

Renaud was tasked with facing down a Nick Chokrev-Cerpcnjak penalty shot and made a nice right pad stop at 11:32 of the third.

As Eric Tessier finished exams and was away from the club this weekend, Renaud got the starting assignments on back-to-back nights, winning his third and fourth games of the season.

Prince Edward County Midget Kings goalie Nick McGrayne served as back up in both contests.