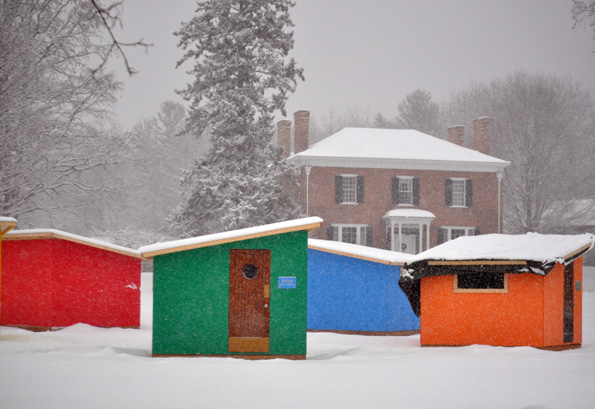 Art in the Heart of Winter.

The Department of Illumination is at it again hosting their second annual Ice Box (IB) public art event on the historic grounds of Macaulay Heritage Park in Picton.

This two weekend, free event which takes place over Feb. 1-2 & 8-9 includes five IB’s each with their own category plus additional programming.

The five interesting IB’s include:

Print – Printmakers Crissy Poitras and Genna Kusch will create a series of relief prints which they will turn into intricate interactive pop-ups; reminiscent of the childhood pop-up book. Working on the theme of ‘migration,’ their creation will be informed by a series of creative workshops with a local high school class about idea generation and research. The students will then present their findings to the artists which in turn will become the basis for the Print Ice Box.

Stitch – Inspired by a recent cross-Canada train trip by the mother-daughter team, Nella and Marion Casson’s Stitch will fancifully recreate the inside of a train car, imagining the experience of those who traveled here in a bygone era. Prior to IB Nella will lead a series of embroidery workshops where participants will be asked to imagine themselves aboard a train destined for Picton. The embroidered pieces will be displayed within the Stitches IB.

Grow – Susanne Larner’s Grow transports the viewer into a fantastical Victorian greenhouse, filled with plants, both real and those constructed from a variety of artistic media. A County local who can trace her Loyalist roots back several hundred years, her Ice Box installation contemplates the seeds, literal and figurative, that settlers brought with them when they arrived in this place.

Be Here Now – Hri Neil explores his fascination with play in Be Here Now, a creative play-space for all ages that meditates on the present as it relates to the past as well as an imagined future. The Be Here Now Ice Box reminds viewers to enjoy the moment and allow themselves to play.

Map – Andrea Piller will work with local students, guiding them as they explore what winters were like in a time before modern conveniences. Topographical maps of the region will be enlarged, gridded, numbered and divided and each student will receive a piece of the map. Research will than be conducted through text books, online resources and community elders. Pieces will then be reassembled and mounted for display in the Map IB.

Some of the additional programming of IB over the two weekends include performances by Juno Award winner Justin Rutledge, snow dances with choreographer Arwyn Carpenter, a presentation by Six String Nation, fire spinning and a flow workshop with Trellis Arts & Entertainment, a joyful community procession, marshmallow roasts, the forever Canadian tradition of maple taffy on snow, among even more season inspired surprises waiting for you to unfold.

The Department of Illumination was founded in 2013 by a group of artists in Prince Edward County (PEC), who came together to create the Firelight Lantern Festival. This annual tradition has grown to become one of the most beloved cultural events in the County. Six years later, they expanded their work with the creation of Ice Box, showing love for the community to create magical arts experiences that are accessible to all.

This event is free with donations being accepted