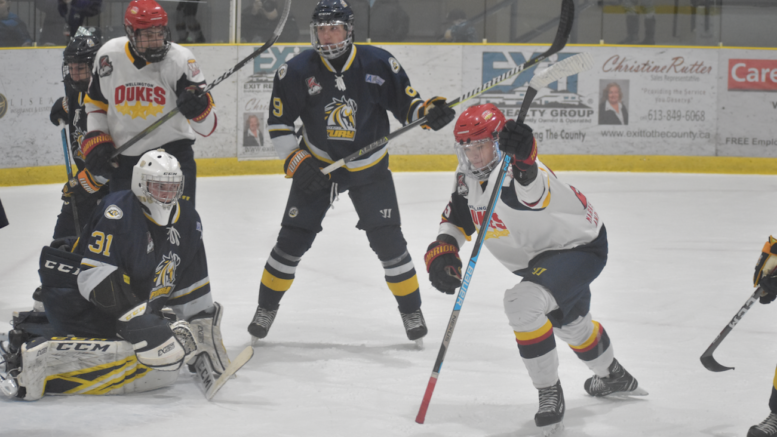 IF LOOKS COULD KILL- Whitby goaltender Will Craig realizes the puck is behind him as Wellington Duke Dylan Massie begins his goal celebration in the first period of the Dukes' 5-2 win over the Fury at Lehigh Arena Friday night. (Jason Parks/Gazette Staff)

The Wellington Dukes started 2020 in the same fashion they ended 2019. By winning.

While the locals were victims of chasing the game somewhat on Saturday night, the Dukes knocked off a pair of East Division clubs in back-to-back fashion this weekend to gain valuable points in the race to the finish line of the Ontario Junior Hockey League’s 2019-20 regular season.

Wellington dropped visiting Whitby 5-2 on Friday night before busting a 2-2 tie in the third period and besting the visitng Lindsay Muskies 4-2 on a rare Saturday night home game at Lehigh Arena.

The wins moved Wellington’s regular season mark to 29-7-2, good enough for 60 points and the best overall winning percentage in the OJHL’s Southeast Conference at .789.

The Dukes trail the East Division leading Trenton by a point but have two games in hand on the Golden Hawks.

Meanwhile, over in the South, the Toronto Patriots have floundered, losing seven of their last nine games and have fallen four points back of the Division-leading Toronto Jr. Canadiens. 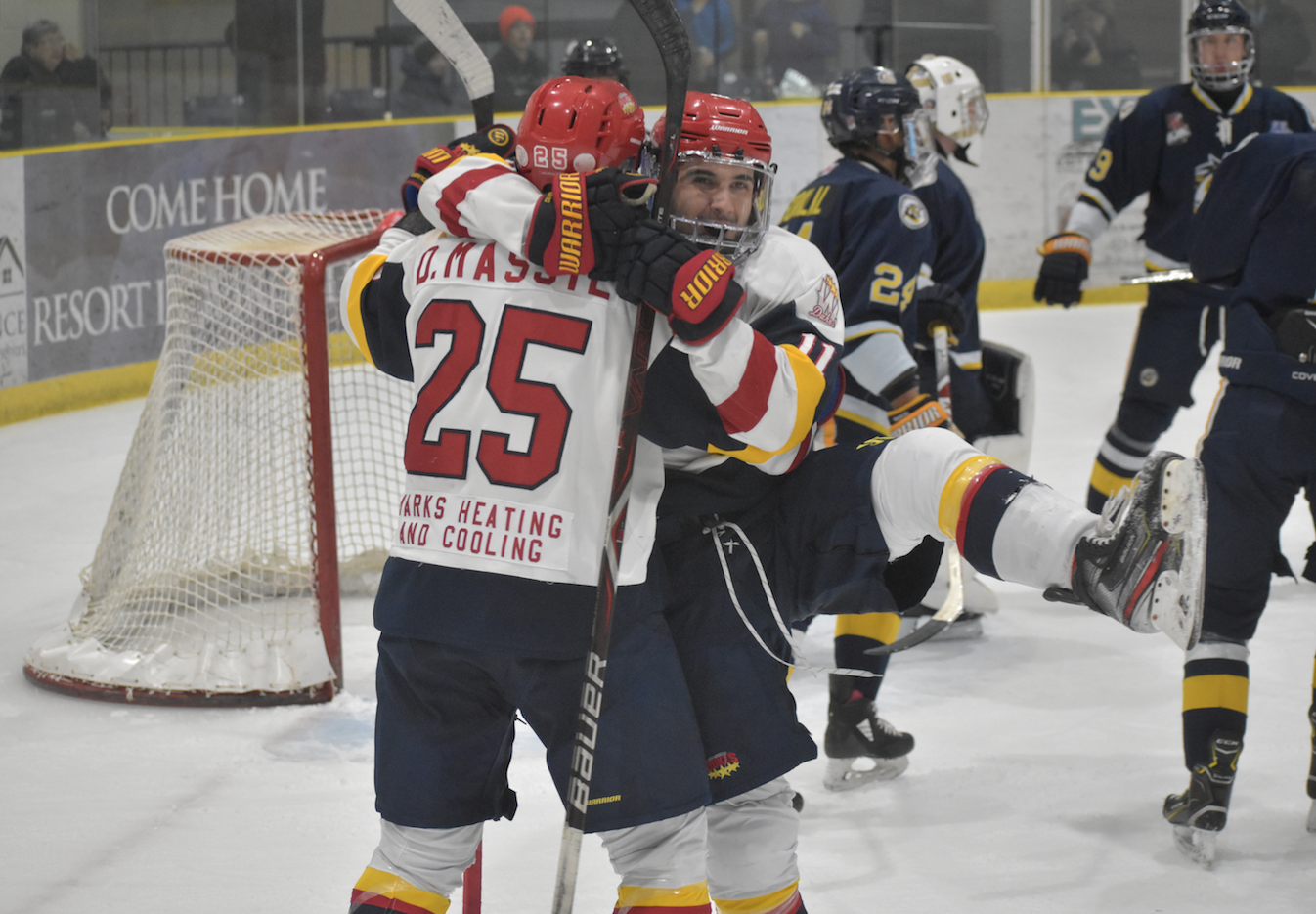 GETTING A LEG UP- Frank Vitucci celebrates Dylan Massie’s first period goal. Vitucci had a goal and an assist in the third period to pace the Dukes offence on Friday. (Jason Parks/Gazette Staff)

With 16 games left in the regular season, points are at a premium for all the teams chasing the top slot in the conference so Dukes coach Derek Smith was perfectly fine with picking up the full compliment of points this weekend  as they faced the two teams at the bottom of the East Division.

But, if the critiquing of Wellington’s first two games back were done under a microscope, there were certainly a few warts that would be identified by Smith and his staff.

On Saturday in Lindsay, Wellington gave up the games first goal and were in a dog fight late with a desperate club that was getting a fine effort in net by goaltender Ben Edwards.

“It felt like we were a little off and if you don’t bury your chances in this league, every team has the ability to come back to haunt you,” Smith told the Gazette Monday. “We feel happy about the two points especially in January but it was a battle.”

Lindsay would open the scoring just over three minutes into the first as Duncan Scullion finished off a 2-on-1 and beat Dukes starter Matt Keeley coming across the crease and tapping home the game’s first goal.

But Smith was very happy with the Wellington response as the Dukes pushed back immediately.

The Dukes simply dominated the Muskies for the better part of a minute, bombing the Lindsay net with shot after shot.

Finally, Ben Evans corralled a Jake Gagnon rebound, made a nice between-the-legs deke to fake out a sprawling Edwards and lifted a back hander into the Lindsay net 58 seconds after the Muskie goal.

Wellington would bag the only goal in the second as Nick Paul tipped a Cole McGuire point blast past Edwards at the 11:08 mark.

In the third, the Muskies got life early when Jacob Dupuis beat a screened Keeley 34 seconds into the frame to tie the game at 2-2.

But the power play marker by the Muskies was answered just under four minutes later when Wellington bagged a power play goal of their own.

Noah Massie, making his return to the lineup this weekend after an upper body injury sidelined the St. Lazare, QC native in early November, delivered the puck to the Lindsay net from the blue line and hulking Brodie McDougall managed to tip it by Edwards at 4:25 to put Wellington back into the driver’s seat for good.

Later in the frame, the Dukes would grab some insurance as Dawson Ellis found Dan Panetta cruising to the slot area at 9:44 and the Belleville, ON native snapped home his 12th of the season. 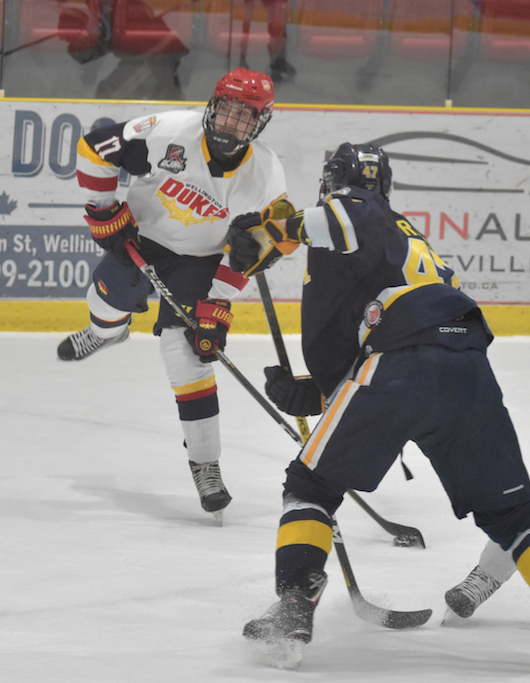 Keeley would make 22 stops in the game and was busy down the stretch but steered the two goal lead to the finish line for his 13th win of the year.

A night prior, Wellington managed to build a 2-0 lead early and never looked back in their victory over Whitby.

“We came out in that first period buzzing,” Smith said.

It was a joyous sight for Wellington fans as Evan Miller started the scoring partway through the first period.

Of course Dukes fans could be forgiven if they had forgotten about the Niagara, ON native being on the roster.

After a splashy start where he had four points in his first four games as a Duke, his fifth game of the year brought about a broken leg and, after rest and rehabilitation,  Miller finally made his return to the lineup this weekend.

Smith said Miller, who came over from the Thorold Blackhawks in the summer, has worked extremely hard to work his way back into the lineup.

“It’s a benefit when we can all of a sudden add a high-skilled player to the lineup at this time of year and I feel so happy for him to see him make it back. Evan is a great kid with tons of potential and we are thrilled to have him back in our lineup,” Smith said.

Miller followed the puck to the Whitby net and potted a McDougall rebound to the top shelf at the 6:58 mark to give Wellington a 1-0 lead.

Later in the period, it was Dylan Massie skating out of the corner and snapping a puck past Whitby starter Will Craig to make it 2-0 Dukes.

In the second, Oliver Tarr would get his first of two goals on the night, beating Wellington starter Matt Dunsmoor at 7:07 of the second to carve the Dukes lead in half.

But Wellington restored the two goal edge at 12:50 when Justin Paul fed Evans on an odd man rush and Wellington’s captain went top bunk over a sprawling Craig to make it 3-1.

Then, just 23 seconds later, it was Vitucci picking up an assist as Miller batted home a rebound at the side of the net to make it a 5-1 score.

Tarr added a goal in the late going for Whitby but Dunsmoor was solid most of the night, making 30 stops for his 21st win in 22 starts for Wellington.