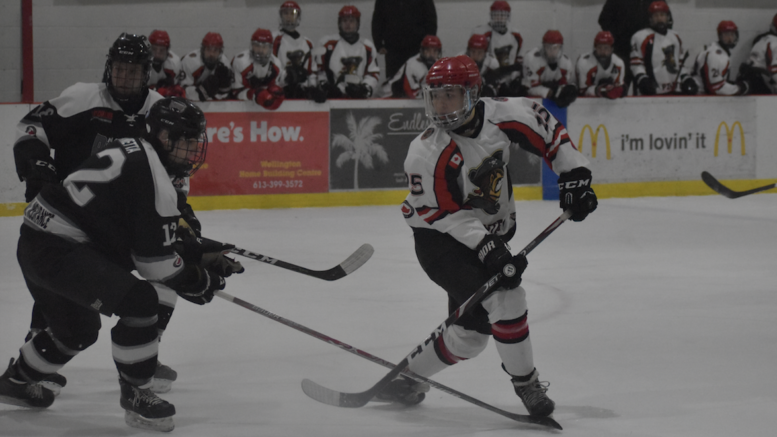 A dozen proved to be too much for the Picton Pirates but the final win of their incredible 11 game win streak gave plenty for the locals, the Provincial Junior Hockey League leaders and the rest of the Tod division to think about.

The Pirates ( 18-3-2, 28 points) handed the visiting Napanee Raiders their worst defeat of the season Thursday 6-3 before bowing out to the Amererstview Jets 3-1 on Sunday night.

The setback in Amherstview on Sunday was Picton’s first loss since they were downed 3-1 by the visiting Uxbridge Bruins way back on Nov. 23, 2019.

It was highly unlikely Picton was going to run the Tod Division table through the rest of the 2019-20 regular season so a loss shouldn’t surprise the locals too much.

However, with a gauntlet of games coming up against the three other teams vying for one of three playoff spots in the offing, it’s imperative Picton regains its recent form.

Picton Pirates skipper Ty Green told the Gazette assistant coach Andre Denomme said it best in the moments after the loss Sunday that the squad played like it was scared of losing the winning streak and not finding ways to win the game which was secret ingredient to the local’s success over the past two months.

“It’s been emotional and we’ve been in playoff mode for these last two months and it’s taken a toll but we need to regroup and be ready for what lays ahead of us,” Green said.

After outshooting the Jets in the first period and putting together a “just ok” road period, Picton was uncharacteristically flat in the second period and the Pirates were burned by it.

The Jets would pour 20 shots on Picton starter Kyle Renaud in the frame and light the lamp three times. 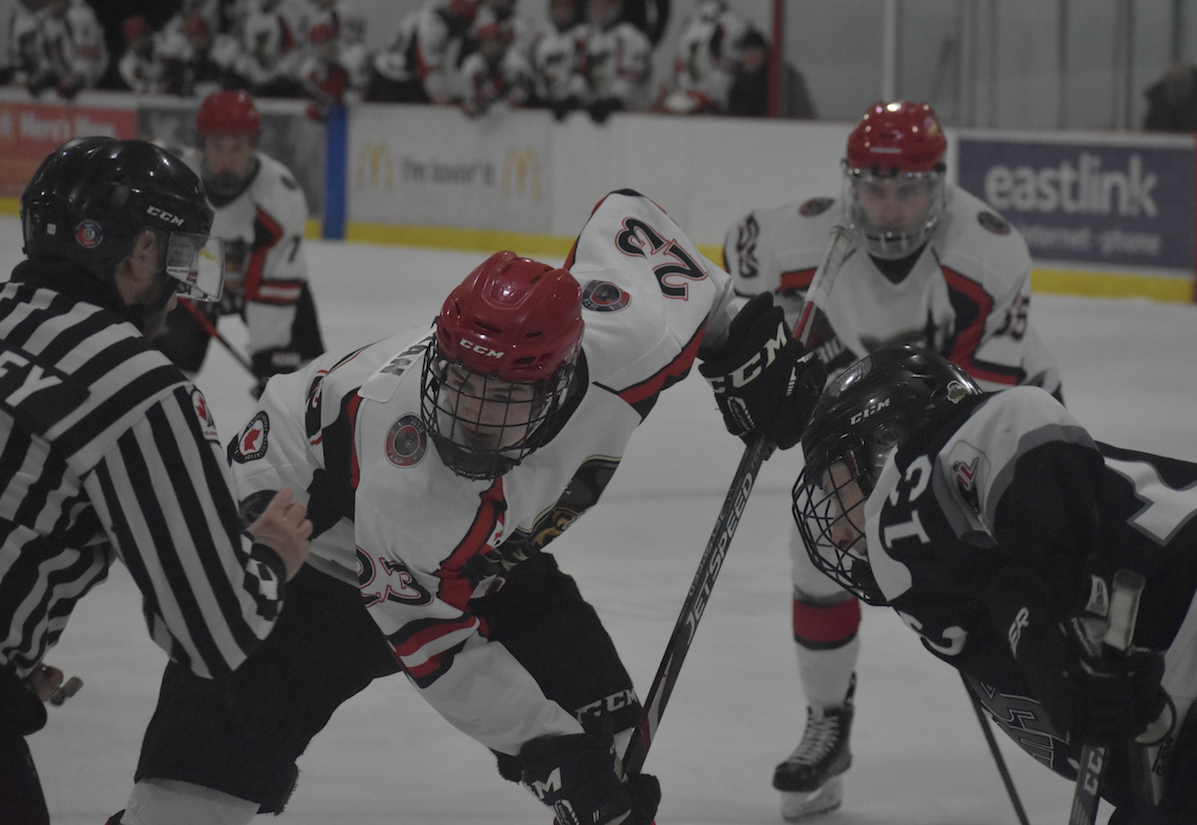 Picton’s Landon McLellan takes the draw while (Right) Brian Bygrave is set for an offensive zone face-off against the Napanee Raiders. Both players had goals in Picton’s 6-3 win Thursday. (Jason Parks/ Gazette Staff)

Noah Prudhomme would get the game’s first goal at the 4:22 mark on the power play to stake the hosts to a 1-0 lead.

But under a minute later, Picton would answer as Tod Division Player of the Month Khaden Henry spotted defenceman Cooper Rogers at 5:06 and the Picton native found a hole in Jets starter Brady Sarazin.

During the winning streak, observers would note the Pirates were doing all the little things it takes to mount such a mark and that included strong responses to push back shifts after Picton had managed a goal.

On Sunday, a tell of the Pirates and their fortunes came just 11 seconds after Rogers had tallied his third of the season as Cody Smith set up former Pirate Jaydon Wood for what would stand as the game winning goal.

The Jets would add an insurance marker later in the frame when Blake Hogle bulged the twine behind Renaud at the 17:30 mark.

Picton was outshot in the third but did wind up with a pair of power plays that they couldn’t capitalize on and bring the contest to a one goal game.

Overall, the Pirates went a disappointing 0-for-7 with the man advantage.

“The work ethic and identity we’ve had over the the streak just didn’t materialize Sunday night,” Green said. “In order for any team in this league to be successful, they need to show up and put the work in.”

Picton was full credit for doing just that on Thursday night at home as they beat the PJHL-leading Raiders going away and handing the visitors their most lopsided defeat of the season. 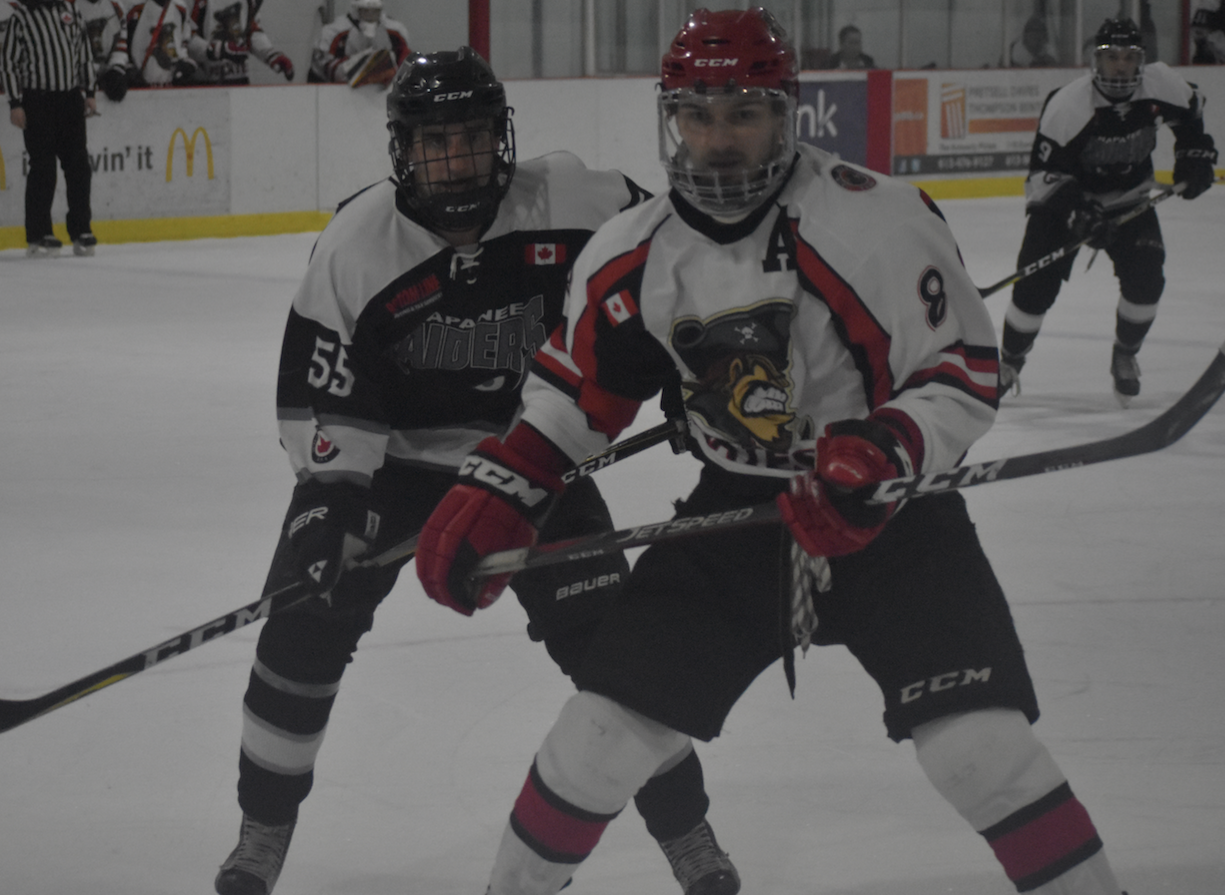 The Pirates emerged from the dressing room like a house on fire and took the play to the Raiders, hemming Napanee their own end for long stretches of play.

Picton’s captain Will Harrison would set up Landon McLellan at the 5:29 mark of the first to stake his to an early lead and the Pirates would add a power play marker at 14:31 when Griffen Conger came back to haunt his former squad.

The Raiders responded in the second as Justynn Steven solved Picton starter Eric Tessier at 5:06 to cut the Pirate lead to 2-1.

Later in the frame, former Pirate Austin Labelle would pick the top corner from the goal line during a Raider power play to knot the game up at 2-2.

But, as has been regularly the case during the streak, Picton was able to break the game thanks to a skill play.

Rogers would spring Brian Bygrave on a rush and the Picton forward showed a deft touch, slipping a backhanded effort past Raider starter Bailey Maracle with under two minutes left in the second.

“He’s been one of the game breakers that have gotten us over the hump but the way a lot of our first year players have matured and developed over the last few months need to be recognized as well,” Green said. “Having Bygrave, McLellan and Renaud come in has been a huge piece of the puzzle but we aren’t where we are without a lot of our young players stepping up and taking on key roles and growing into those roles.”

Early in the third, Picton would continue to press the attack.

After a flurry round the Napanee net during a Pirate power play, Maracle wound up prone and caught up with his defenceman.

Defenceman Nick Kyte was able total a McLellan feed at 3:29 and slip the puck into the Raider net to make it 5-2 Picton.

Kyte’s tally was his third goal in two games and the Belleville, ON native has been sensational from the backend, potting nine tallies and adding 19 helpers to provide an offensive solution from the Pirate blue line.

The Pirates were buzzing and the stinger would be administered just under a minute later as Cole Lavender’s point shot bounced off the boards behind Maracle and the Napanee goalie played it into his own net to make it 5-2 Picton.

A Greg Powles power play goal just 19 seconds later brought the Pirates back down to earth but full credit must be paid to the Bucs as the team and Tessier managed to keep the visitors off balance, to the board and away form the Picton net.

Tessier, active in his crease all night, made three or four key saves down the stretch to keep the two goal lead intact.

“He really gets up for the games against the Raiders and enjoys that responsibility,” Green said. “There’s a perception that (Renaud) is our number one goalie but with Tess’s body of work against the Raiders especially, I don’t know how anyone can say we don’t have two number ones right now.”

Napanee bench boss Ben Hagerman would yank Maracle for the extra attacker with about four minutes left but Khaden Henry would send his 27th goal of the season into a yawning Raider cage at 17:26 to seal the deal for Picton.

With the split, Picton has a tenuous grasp on third place in the Tod-One point ahead of fourth place Gananoque and three points ahead of the fifth place Port Hope Panthers.

The Pirates trial the Jets by four points and Amhersetview has a game in hand on the locals as does Port Hope.

Picton hosts Port Hope on Thursday and then plays Clarington at home on Saturday night.

On Sunday, the Pirates are Gananoque bound for their third game in four nights, and, after months of trying to stalk the teams ahead of them in the Tod Division playoff race, Picton finds itself in the strange position of defending their accumulated points lead against a pair of challengers.

“We’ve worked hard to get where we are right now and we are well aware of what’s at stake this weekend,” Green said.