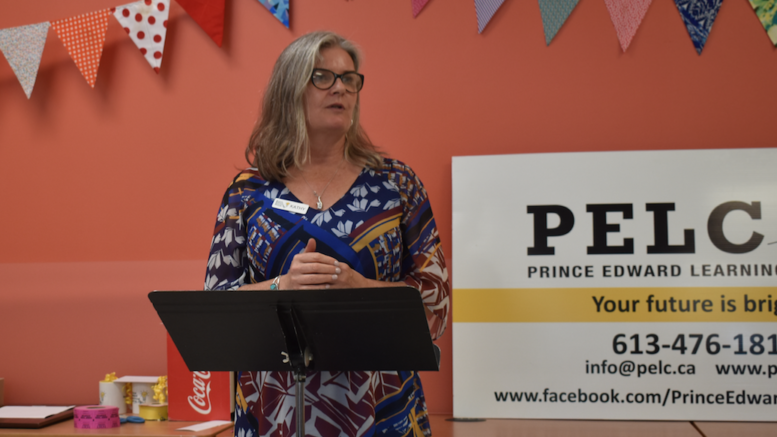 Choosing not to act in the fight against financial insecurity could be detrimental to the municipality as Kathy Kennedy, Executive Director of Prince Edward Learning Centre (PELC), pointed out during Thursday’s Committee of the Whole Meeting at Shire Hall.

Kennedy approached council asking for $35,000 to be carved out of the 2020 municipal budget so PELC can expand their array of services. In 2019, programming offered by PELC brought in about $1.1 million to Prince Edward County residents who utilized the tax, benefit and financial-related specific programming offered by the adult education centre.

PELC offers tax workshops and assists individuals with applying for provincial and federal benefits which applicants are entitled to but may not understand the application process.

Kennedy explains that PELC’s goal is to help bring $7.5 million to residents-thereby the local economy- over the next two years in part through increasing their financial literacy and tax clinic programs.

The financial request to council is a one-time request and a first for PELC, an institution that operates thanks to core funding from the federal and provincial governments along with various grants and other streams of funding such as United Way.

“We’re kind of stuck without extra resources, Kennedy told council. “We do what we can off the side of our desk, so-to-speak, but without more resources, we really can’t expand.”

Part of Kennedy’s plan for PELC’s future is to provide services outside of the main hub of Picton, as well as bundling their services with other community agencies, such as those that deal with housing, child care or career development.

Some of the services provided by PELC include financial literacy and education, free tax filing for people with incomes under $35,000, helping people access benefits they might not know about, and one-to-one counselling.

“In your community, about 10,000 households, probably close to 1,740 people, view money as their biggest problem,” stated Kennedy, explaining why this issue is important. “When people aren’t able to sort things out financially, Prosper Canada sees there’s a cost to the municipality. They’ve estimated the cost of financial insecurity to be anywhere between 0.3 to 4.6 per cent of a municipal budget, so on the PEC Operating Budget of $54 million last year, you could estimate a cost (of financial insecurity) between $162,000 and $2.5 million.”

The cost to the municipality by way of financial insecurity presents itself as family violence, homelessness and food insecurity, among myriad other issues. As Kennedy asserts, these are all challenges encountered daily at PELC.

“If we look at the 2015 census data, we can see 22 per cent of households in PEC have incomes under $35,000. That was, frankly, a fairly alarming number to me. Locally, we’ve actually seen almost 2 per cent more people within the last 15 years at that low-income threshold. We also have 1, 200 people in receipt of Ontario Works. There are very low incomes in this community, given what we’re seeing with housing,” emphasized Kennedy.

Nationally, Prosper Canada has supported the growth of these types of financial empowerment programs but only in urban areas because they’re looking for a critical mass impact.

“We’ve been trying to piece together ways to do this very important work, but in a rural way,” added Kennedy.

Councillor Bill Roberts inquired as to what demographics can be found accessing PELC’s services.

“I think this is brilliant and you should be congratulated and get your $35,000. I’m looking at the Vital Signs Reports and they’re indicating the number of folks 65 and older that are living under the poverty line has doubled since 2013. Are you finding its mostly seniors who take advantage of your program?” inquired Roberts.

“This program is serving people right across the board and each group has a different need. Young people might not know that if they file they’re going to receive taxes back on employment or even if they don’t work they should still file to receive HST and Trillium Benefits. People who have kids and don’t file don’t receive the child tax benefit, which is devastating,” Kennedy explained.

“We had one person on ODSP come to the tax clinic who had five children. We back-filed 10 years for her and her entitlement was $50,000,” said Kennedy. “It’s not uncommon for people to receive fairly large amounts of money, which will go to pay off insurance, rent and prescriptions…things people need for their kids.”

Councillor Brad Nieman inquired as to the possibility that PELC could receive funds through the Community Grant instead.

“The deadline for that hasn’t closed as of yet. We haven’t applied for that. We are pretty much applying where we can,” stated Kennedy. “My assumption would be this is a municipally approved community well-being and safety plan, so you might want to consider it as part of that, as opposed to having us compete with community organizations that have a specific community project in mind. That, of course, is your decision. But, philosophically, it might be something you want to consider.”

The deputation was received as a Roberts/MacNaughton motion, which allows council to discuss this particular request during budget considerations.