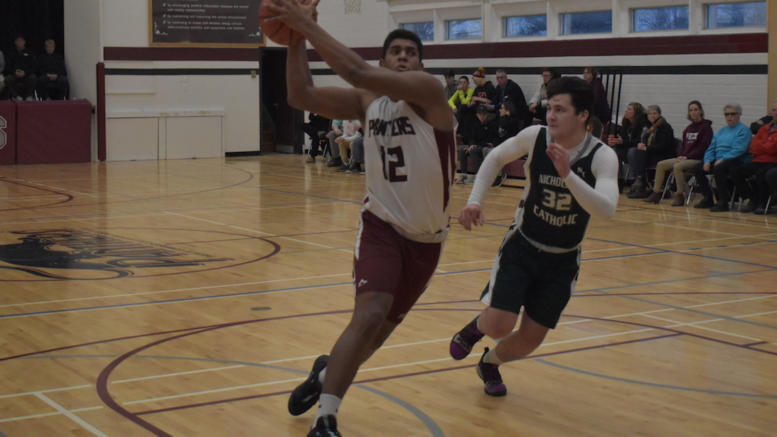 THE A TRAIN- PECI forward Alex Arsenault makes a power move to the Nicholson basket during the Panther's win over the visiting Crusaders Thursday. (Jason Parks/Gazette Staff)

The PECI Senior Boys Basketball team are making a big statement to the rest of the Bay of Quinte Athletic Conference that the Panthers are on a mission for the 2020 Bay of Quinte Championship.

PECI out shot the East Northumberland Secondary School Blue Dragons 58-33 and the North Hastings Huskies 64-32 at ENSS Monday to move their B of Q record to 7-0 on the season and 12-2 overall. 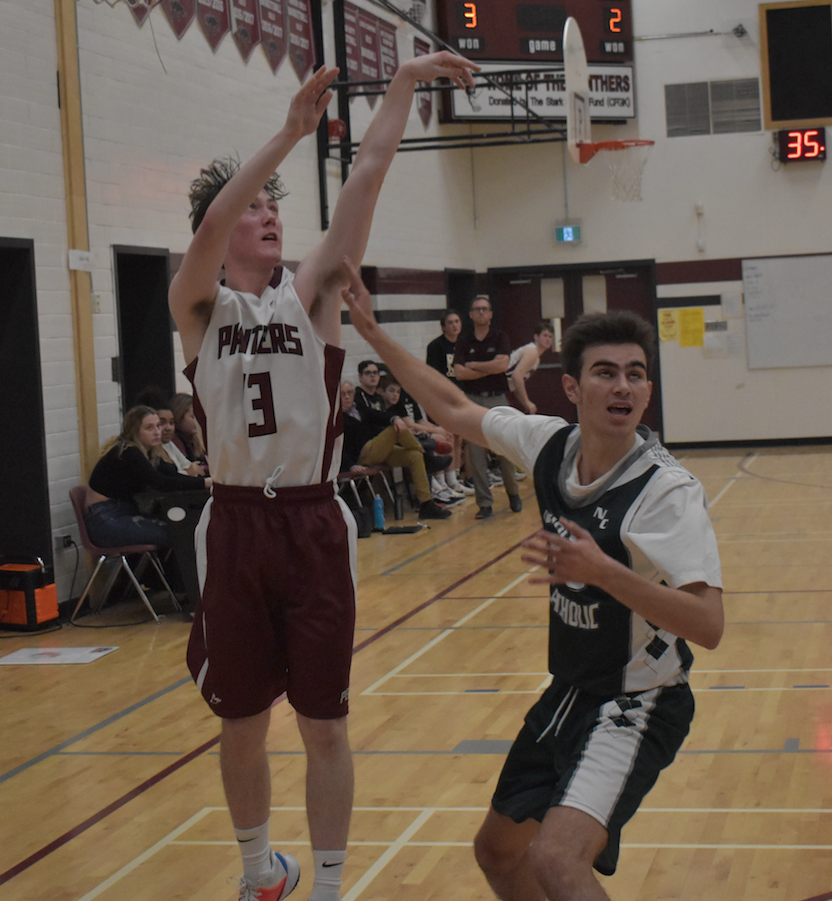 PECI cemented their status as a top dog in the Bay of Quinte by virtue of their win over the rival NCC Crusaders Thursday evening in front of a packed gym at PECI.

The Cats were coming off a big 64 – 35 win over St. Pauls at Trenton earlier in the week and they got off to another great start leading 8 – 3 after the first quarter.

“Since the start of the new year, we’ve really been stressing the importance of our defence,” said coach Rob Garden. “To hold NCC to three first quarter points is a great sign that the boys are buying in. We have some real defensive standouts like Logan Stark, Thomas Davies, Ross Maycock, Cameron Pero and Cooper Rogers who can shut down the oppositions best players.”

The Panthers had a balanced attack in the first half with six players scoring, including three pointers from Devon Wilton and Thomas Davies and led 26 – 17 at the half.

“We were happy with our performance in the first half, but the players knew that we had too many turnovers and took some unnecessary fouls. They are an experienced bunch so coach Ernie MacMillan and I don’t have to say much and we’re letting the boys take the lead,” said Garden.

PECI made the adjustments and jumped all over NCC and won the quarter 11 – 3. Ryan Doolan started the quarter and was effective on the boards and Dylan Morrow came off the bench and made an immediate impact by taking a charge foul that gave the team energy.

Ghaffar Mehmood had his best game of the season, scoring a season high 10 points. “Ghaffar suffered a knee injury and has not been able to play for over a year. He stuck with it, rehabbed and it’s great to see him getting his timing and confidence back.”

Despite some early foul trouble, Forward Alex Arsenault took over in the 4th quarter, scoring 9 of his 14 points. “Alex is a tremendous athlete and the strongest player I’ve ever coached. He’s learning how to control his emotions and stay out of foul trouble, but he dominated the quarter and the rest of our guys get energy and confidence when he plays like that,” said Garden.

Over the weekend PECI went 3-1 at the Trinity College tournament in Port Hope, defeating O’Neil from Oshawa 65-54, Colour Collegiate 60-33 in their second preliminary game and Appleby College 46-40 in game three.

This set up a final against Peterborough’s Adam Scott who managed to slip past the flagging Panthers 46-37.

PECI faces its stiffest test of the season on Tuesday when they take on the Titans of St. Theresa’s in Belleville. Tip off is 5:30 p.m.