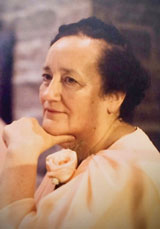 Yvonne Esther Savary died on January 6 (The Epiphany), 2020, surrounded by her children at the Prince Edward County Memorial Hospital. She was hurried away too soon, at the age of sixty-four, weeks after a diagnosis of cancer. Lovingly devoted Mother to Heidi (Mike), Aaron, Benjamin, Melody (Lawrence), Emily (Daniel), Zachary, and Abraham, for whom ‘her absence is like the sky, spread over everything. Cherished ‘Grammy’ to grandson Elias and unborn grandchild to be named ​in memoriam​. Predeceased by parents Beulah and Victor, and son Abraham. Survived by siblings Sheila (John), Elizabeth, and Tim. Her lovingkindness, her spirit of faith and hope, her greathearted strength of character and devotion to her children will be forever remembered by those blessed to know her. The family received friends on Monday, January 13th from 6-8 p.m. at the AINSWORTH FUNERAL HOME, 288 NOXON AVENUE, WELLINGTON. Funeral Service was held on Tuesday, January 14th at 1:00 p.m. at the TRENTON BAPTIST CHURCH, 125 DIXON DRIVE, TRENTON, officiated by Rev. Terry Gerow. (Private springtime interment.) Yvonne’s sons and daughters would like to thank the staff at PECMH for their kindness and support. As a Mortgage Broker, Yvonne selflessly advocated for disadvantaged families so that they could have homes, not ‘precarious lodgings while the rent is paid’; memorial donations may be made to Habitat for Humanity Canada at ​support.habitat.ca​. Online donations and condolences at www.ainsworthfuneralhome.com
The collect at Epiphany: O GOD, who by the leading of a star didst manifest thy only-begotten Son to the Gentiles: Mercifully grant that we, which know thee now by faith, may after this life have the fruition of thy glorious Godhead; through Jesus Christ our Lord. Amen.