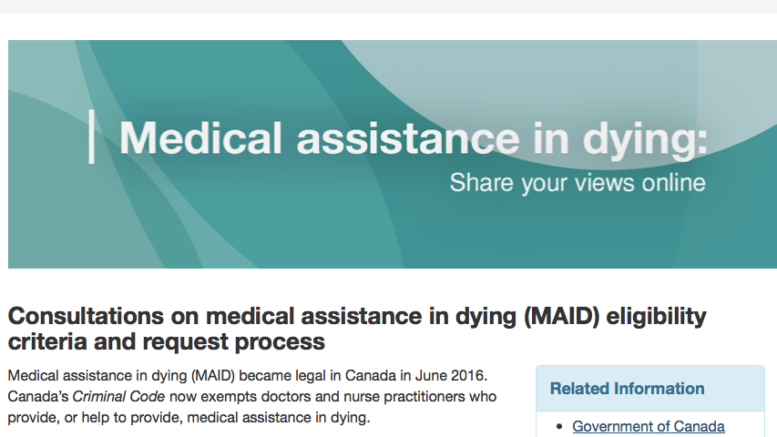 CONSULTATION WINDOW- The Department of Justice is calling on Canadians to provide their opinion on the eligibility and criteria needed to enrol in the Medical Assistance In Dying program. (DOJ screen shot)

With the Department of Justice calling on Canadians to weigh in on who should be eligible for Medical Assistance In Dying, an advocate of Picton woman who was denied entry into the MAID program and ultimately took her life after years of chronic pain wants to share the story of Madeleine.

In the public consultations section of its website, the DOJ has posted a questionnaire offering Canadians “the opportunity to share their views with the Government of Canada on this deeply personal and very important issue.”

This consultation was prompted by a Quebec Superior Court ruling in Sept. 2019 on the eligibility for MAID based on a person nearing the end of life.

In a case involving two persons stricken with incurable medical conditions, the court ruled the “reasonable forseeabillty of natural death” criterion in the Criminal Code of Canada as well as the end-of-life criterion in the Quebec provincial law on medical assistance in dying as unconstitutional.

That ruling has prompted the Government of Canada to open a two week window to garner public opinion on the MAID process, specifically who should be eligible and on what grounds.

The survey, which opened Jan. 13 and closes Jan. 27, can be viewed at www.justice.gc.ca/eng/cons/ad-am/index.html

Nancy Johnson is a retired registered nurse who was devoted to her dear friend who we will refer to in this story by her first name, Madeline. Johnson watched as a degenerative disc disease that materialized in Madeline’s early 70’s caused progressive and incurable degeneration of her spine causing unbearable nerve pain down her spine, legs, and eventually her arms.

Johnson explained that since the autumn of 2014, the pain could not be relieved with various medications and her family doctor tried all the nerve and opioid medications that Madeleine could tolerate, but to no avail.

“The pain was relentless and Madeleine expressed that she was trapped in a body that was painfully failing her,” Johnson told the Gazette.

Madeleine’s family doctor had arranged consultations with specialists regarding surgical possibilities and spinal pain management treatments. She attended pain clinics and tried many different pain medications. Unfortunately Madeline was not a candidate for surgery due to the extent and severity of the disc degeneration of her entire spine. All other attempts at pain management had also failed to give her any relief.

Living alone with no relatives in Canada and her quality of life diminishing daily, Madeline started to seek options. Johnson said her friends began to help buying her groceries, doing her banking and became increasing concerned about her deteriorating physical condition.

Having been born in Europe and with a niece living in Zurich, Madeline explored the Swiss organization Dignitas for medical assistance in dying. The paper work was initiated.

“She wanted to be able to die with some dignity while she still could,” Johnson said.

Madeleine found she was not able to look after her two cats any longer so she began the process of finding new homes for them. A trained artist that studied at the Vancouver School of Art, she was also in too much pain to find any inspiration for doing any form of art.

Some time after exploring Dignitas, Madeleine learned about the MAID program that became available in Canada in 2016, and, after the expense of travelling abroad proved a major deterrent for someone living on a fixed income, it was deduced  the MAID program was Madeleine’s only hope for “the peaceful planned death that she so wished for now.”

Ultimately, on a late July day in 2017,  Madeleine was informed she didn’t meet all the eligibility criteria for the MAID program which was devastating news for the Picton resident so plagued with pain.

“With courage and determination, she planned her own death that evening by taking enough pain medication to overdose and enter a pain free deep coma,” Johnson said.

Her friend found her Friday morning dressed in her silk pajamas, favourite jewelry and make-up with a note pinned to her pillow which said “Do not resuscitate. I want to die with dignity”.

Madeleine was taken to Prince Edward County Memorial Hospital where staff acknowledged her wish not to be resuscitated and she quietly took her last breath as she so desired.

In addition to the recent rulings in Quebec, the Ontario Supreme Court had ruled in favour for a woman whose situation was similar to Madeleine’s and also wished MAID just a month prior before the Picton resident took her own life.

“The judge declared that the MAID legislation was intended also to apply to a person who was ‘on trajectory toward death’,” Johnson noted in that case.  “The woman qualified for MAID because she was in an advanced state of incurable, irreversible, worsening condition with excruciating pain and no quality of life.”

“Madeleine’s story needs to be told because the system failed Madeleine in the time of her greatest need,” Johnson added. “While her natural death was not easily predicted her slow decline, her increasing failure to thrive and her wish to have the relentless pain end should have been sufficient criteria for the help she so badly wanted,” said Johnson.