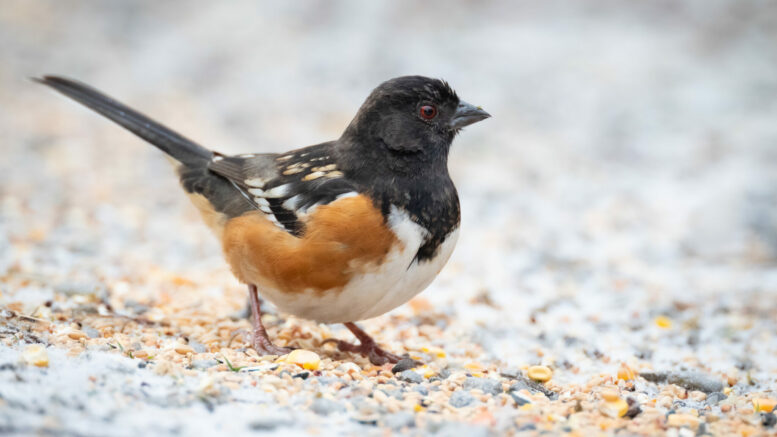 An off-course stray has drawn hundreds of birdwatchers from across Ontario to Prince Edward County.
The source of the excitement is a Spotted Towhee, a species from western North America that typically winters in the southwestern United States. Instead of enjoying that warm southern hospitality, this particular towhee decided to make frosty Point Traverse on the County’s southeastern tip its winter home.
The bird was originally found in mid-November by County birdwatcher Paul Jones, who, with the assistance of ornithological experts, confirmed the bird’s identification and spread word of its presence.
“One of the things that makes birdwatching exciting is that birds sometimes make migration mistakes” said Jones “When that happens and they show up in unexpected places, it’s a matter of great interest.”
Jones confirmed this is the first record of the species for Prince Edward County and a rare bird for Ontario as a whole.
“Birdwatchers from Toronto, Ottawa and even further afield have made the trek to see it,” said Jones “It may be many years before another one makes an appearance.”

Cheryl Anderson, a board member of the Prince Edward Point Bird Observatory, says it is no coincidence the bird has settled in near the group’s research station.

“County geography forms a giant funnel, with prevailing westerly winds moving birds east along the lake shore until they run out of land at Point Traverse,”  said Anderson. “Tens of thousands of birds pass through the location each spring and fall, which is why it is a National Wildlife Area, and likely the reason the towhee is there now.”

Present for over two months, the bird continues to delight birdwatchers.

“It’s a big rush to find a rare bird, and even better when you can share the sighting with others and it’s hard to imagine a prettier spot for out of County visitors than Point Traverse,” added Jones
For information on seeing the bird, contact the Prince Edward Point Bird Observatory at info@peptbo.ca
-Staff
SHARE TWEET PIN SHARE