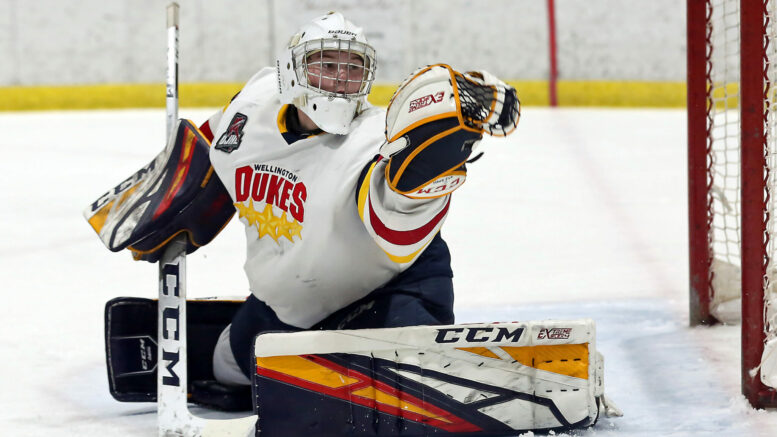 After dominating the Trenton Golden Hawks in four of their previous five head-to-head match ups this season, the Wellington Dukes got a chance to feel what life is like on the other side of the score sheet in the always acrimonious Battle of Quinte on Friday.

The Dukes, without Ben Evans and James White who were suspended in last Monday’s win over Cobourg, could have used more fire power in the lineup as the visiting Golden Hawks limited Wellington to a single goal and 28 shots on net.

For their part, the visitors were likely sick and tired of hearing how they had yet to defeat the Dukes through five games in the 2019-20 campaign and it showed in their stride as Trenton peppered the Wellington net time and again through the opening 40 minutes, outshooting the Dukes 46-17.

In front of over 900 fans, the Dukes started off well enough.

Jake Gagnon would spring Frank Vitucci on a partial breakaway at the 4:28 mark of the first and the Yardley, PA native would pick the corner clean on Trenton starter Anand Oberoi with his 26th of the year for a 1-0 first period lead. But the Golden Hawks kept sustained pressure around the Wellington net and fired a response on the power play at 9:08 of the first.

With Dawson Ellis set to emerge from the penalty box, Trenton made the most of its last volley during a mid-period man advantage as newly acquired Sullivan Sparkes used a high zone tip to get the puck past Matthew Dunsmoor who was under siege for most of the contest.

Tied at 1-1, the Golden Hawks would find the game winning tally later in the first when former Duke Dalton Bancroft would go to the Wellington net and knife one past Dunsmoor after the home side’s defence could not clear two rebounds laying in the slot area.

Dunsmoor was outstanding in the second period as he single-handily kept his team in the contest as the visitors out shot Wellington 24-6 in what was almost certainly the club’s worst 20 minute spans of hockey this season.

With time winding down in the frame, a scramble in front of the Dukes net led to Griffen Fox lifting the puck over a prone Dunsmoor with just six seconds left on the clock.

The last second goal was a dagger to the heart of the Dukes who would out shoot the Golden Hawks 11-7 in the third in an attempt to come back but Oberoi redeemed himself nicely after some poor showings in head-to-head games against Wellington earlier this season.

An early lift of Dunsmoor with more than two minutes left in the period led to Wyatt George sending the puck into the vacated Wellington net at 18:09 of the third to seal the deal for the visitors.

The loss ended up being Wellington’s only action of the weekend as the poor travelling conditions led to the postponement of Saturday afternoon’s game against Toronto.

Wellington (30-9-2, 62 points) now trails Trenton by seven for the East Division lead but a loss by Golden Hawks to Cobourg on Sunday night opens the door for the Dukes to make some hay in its upcoming schedule.

The Dukes are in Lindsay Friday to take on the Muskies and then plays a return match in Wellington Sunday afternoon at 2:30 p.m. to complete the home-and-home series.

The Dukes then make up the home contest against the Patriots on Tuesday and then welcome the Aurora Tigers on Thursday for 7:30 p.m. puck drops.

Next weekend, Wellington closes out a five-game-in-seven-day home stand with contests against Cobourg on Friday night and another game against Lindsay on Super Bowl Sunday afternoon.