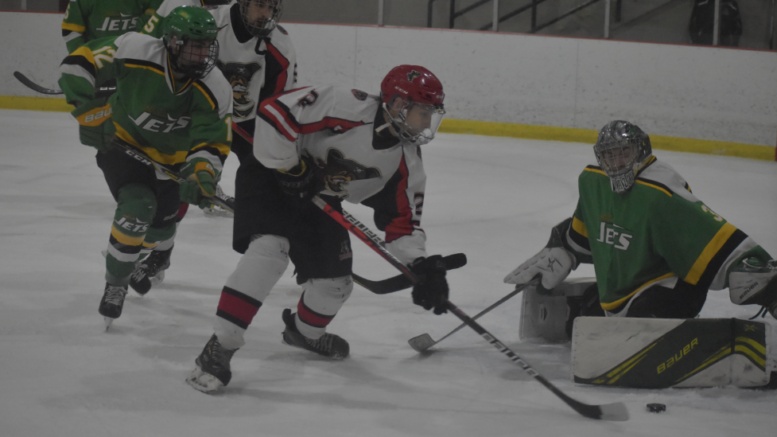 There have been plenty of instances in their 30 year history where the Picton Pirates, faced with a mountain of adversity, have risen to the challenge, defied the odds and won a crucial hockey game.

That preamble is not to either make light of or overstate Thursday’s 5-3 win over the visiting Amherstview Jets but simply to qualify that clutch victory as another link in the three decade long legacy of the hockey club.

Tasked with a pair of in-game injuries, running with just four defenceman through most of it and coughing up a third period lead, the Pirates were able to make the magic happen late in the contest with County native Kurtis Wood coming through with a game winning goal with overtime looming.

The third place Pirates managed to get within two points of the Jets although Amherstview has two games in hand.

The Pirates lead fourth place Gananoque by three points but the Islanders also have a pair of games in hand on the locals, making Thursday night’s win even more vital.

And outstanding when you consider Picton lost Nate Boomhower to the flu and defenceman Nick Kyte after the first period and Brian Bygrave after the second to injury.

After the game, Picton coach Ty Green was happy for his players who were basking in the afterglow an emotional win in a key game that allows the club to at least stay in the hunt for second place in the Tod Division.

“They checked in with their work boots tonight ready to go and that was an incredibly gritty effort to get the win,” Green said.

Taking a 3-2 lead into the third period, A Nick Vecchiarelli point shot took a funny bounce on the way to the Picton net and Hunter Chapman was able to deflect a puck past Eric Tessier and over the goal line at the 7:23 mark.

With already a depleted lineup, Picton was dealt a blow when Wood was stapled to the boards on a heavy hit midway through the frame and caused the Bloomfield native to miss a few shifts.

But Wood came back in a big way.

Collecting the puck at the blue line, the defenceman sprung Griffen Conger and Will Harrison on an odd man rush. Gaining the Amherstview zone, Harrison would wind up hitting a streaking Wood just inside the blue line and the defenceman made no mistake, ripping a puck past the glove of Jets starter Brady Sarazin with just 2:18 left in the contest.

Green was elated with how Wood responded to the physical toll being taken on him through the Jets heavy forecheck.

“I’ve just been real happy with Woody, he’s gotten better each game. He’s smart, he knows what’s at stake and where we are and he knew the time was right to call for the puck and try to get a goal there,” Green said.

Picton would hang on as the Jets pressed for an equalizer and finally, Khaden Henry buried his second of the game and his 32nd of the season into a vacated Amherstview cage with 44 seconds left.

The Pirates also got a pair of goals from Dawson Lindsay. The Gananoque native has two goals and four helpers in his last five games, providing offensive depth that’s been critical to Picton’s recent successes.

Lindsay, traded from his hometown Isles partway through the season, has had a rebirth in Picton.

“When he came over, he was kind of in the dumps which is understandable but he’s really given us that key depth and he is getting to the places he needs to be if he’s going to finish those plays,” Green added.

“It’s been a while since I had scored (Five games) so it was nice to contribute in a big game like this and get the money off my back,” Linsday told the Gazette.

Coming over from Gananoque was a difficult for Lindsay but he’s been happy to be a part of the hockey club.

“When I got the news I was little hesitant because I didn’t really know much about this team or the dressing room but it’s been great, the guys on this team are great and it’s been a lot of fun to come here and contribute to this organization,” Lindsay added.

The Pirates are in Port Hope on Saturday and then make a return trip to Amherstview on Sunday evening.