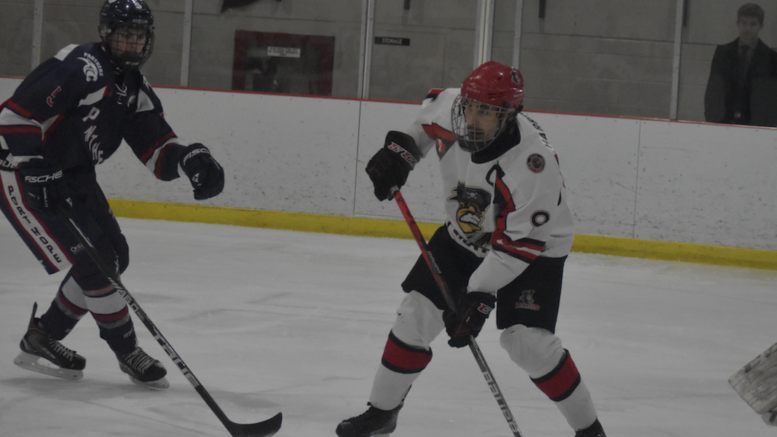 Picton Pirate Will Harrison moved into first place on the organization's all-time regular season games played column on Thursday when he suited up in his 199th regular season contest. (Jason Parks/Gazette Staff)

As the stakes grow larger by the day, the Picton Pirates continue to walk tall in the Tod Division of the Provincial Junior Hockey League.

The Pirates reeled off a pair of clutch wins on the road this weekend to slide into a temporary tie for second place in the division and all but cement their status a team that will compete in the 2020 Schmalz Cup playoffs.

While they haven’t quite punched their ticket yet, the locals certainly administered a dose of cold water on the hopes of the fifth place Port Hope Panthers on Saturday night.

Playing with a shortened bench and down 3-2 with less than 10 minutes remaining, the Pirates would count three times in just over six minutes to jump ahead of the host Cats 5-3.

Port Hope’s Corey Saman would get the Panthers to within a goal with under two minutes to play at 5-4 but Saman and his teammates would come undone at the end of the contest as he and Conor O’Hare would get booted from the game with just five seconds left.

The next evening in Amherstview and with the host Jets surely looking for retribution after losing to Picton on a late goal Thursday night, Picton once again produced a win to move their overall record to 22-14-2, god enough for 46 points and a tie with Amherstview for second place in the loop although the Jets have two games in hand.

But, for a team that’s 15-2 in it’s last 17 games, the Pirates aren’t seeing games as mountains to climb as much as they are seeing opportunities to gain points and stay the Tod’s hottest team.

In Port Hope on Saturday, Picton’s Landon McLellan had the Pirates lone tally in the first period as the club faced a one goal deficit through 40 minutes of play.

Early in the third, Khaden Henry and Will Harrison teamed up to feed Griffen Conger at 4:55 to the contest at 2-2.

The Panthers would re-establish their lead with a Jarrett Desormeaux goal at 8:39 but Picton would soon raid the home side’s net and turn the game on its ear.

Nick Kirby-Palliser would bag a power play goal at the 10:22 mark thanks to helpers from Kurtis Wood and McLellan to get Picton back to even.

At 15:49, McLellan would fire home his second of the game on a nifty unassisted effort while Picton was killing off a penalty to provide the Pirates with their first lead of the contest.

Less than a minute later, it was the dynamic rookie Henry notching his 33rd of the season and fifth game winning goal of the season to stun the Panthers who were desperate for a victory.

An aforementioned Saman goal at 18:15 would trim the margin to 5-4 in favour of the visitors but that was as close as the Panthers would get. Of note, it was a very busy period for Saman who scored a goal, took an unsportsmanlike penalty after Kirby-Palliser scored and then earned a two game sit down with an abuse of officials game misconduct with five seconds left.

Picton’s Kyle Renaud would make 22 saves in the Picton net.

Adding to the lore and lustre of the herculean Picton effort these days was that fact the win in Port Hope came without the services of regulars Nick Kyte, Brian Bygrave, Garrison Moore, Owen Dever,  Nate Boomhower and Cole Lavender who were unavailable for a number of maladies including injury, the flu and mononucleosis.

Picton would be grateful to have the hulking Boomhower back in the lineup on Sunday night in Amherstview as the Belleville native would bag the game winning goal in the second period.

Capitan Harrison would stake his club to an early 1-0 lead thanks to a feed from Henry at 7:17 of the first.

The goal was the Picton native’s 18th of the season and gave Harrison his 50th point of the campaign. It was quite a weekend for the forward as Thursday night’s win gave him 199 regular season contests and that mark eclipses the previous record set by fellow Prince Edward County native and 2013 Schmalz Cup Champion captain Brandon Peever.

Amherstview would score on a delayed penalty at the 7:30 mark of the second as Raymond Beniot would tie the game at 1-1.

But the Pirates responded quickly and it was Wood and Dawson Lindsay setting up Boomhower at 9:29 to put Picton back into the lead for good.

With time winding down and Jets starter Brady Sarazin on the bench for an extra attacker, Kirby-Palliser would shoot the puck into an empty Amherstview net to make it a 3-1 final.

Eric Tessier was brilliant in the Picton net, stopping 45 of 46 Amherstview shots.

Picton hosts Clarington Tuesday evening in a make up of a contest that was postponed earlier this month due to poor travelling conditions.

The Pirates are in Campbellford on Saturday night and then host Amherstview on Thurs., Feb. 6.