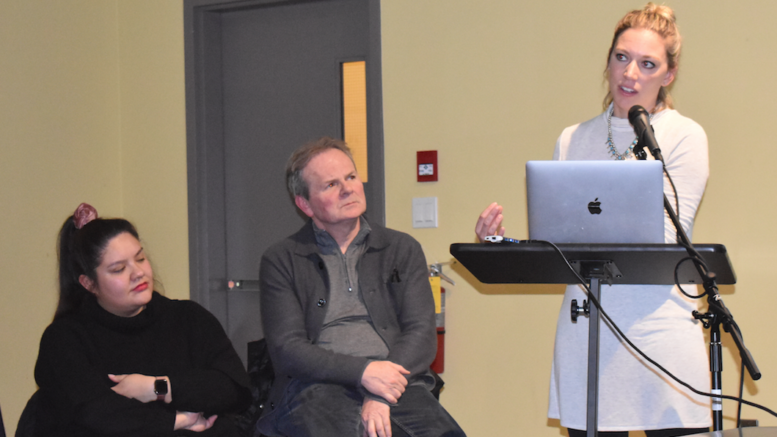 The second instalment of a speaker series that began last year with Dr. Niigan Sinclair took place Saturday at the Regent Theatre. The event featured President and CEO of the Downie Wenjack Fund, Sarah Midanik along with Kateri Lucier-Laboucan and Calvin Brook, both of Brook McIlroy Architectural and Indigenous Design Studio.

The talk, hosted by the Prince Edward County Public Library, is the first after the reinstallation of the Sir John A. Macdonald statue in front of the Picton Library.

Midanik, a member of the Metis Nation of Alberta, began the talk by emphasizing the importance of meaningful communication between Indigenous and Non-Indigenous peoples and the tools used by the Downie Wenjack Fund to disseminate information about Indigenous history throughout Canada.

“If we’re going to talk about ourselves as Canadians and if we’re going to celebrate history and commemorate that in statues and pieces of art in our communities, why aren’t the Indigenous voices and stories present in that history,” questioned Midanik.

Through the three pillars of awareness, education and connection, the Fund focuses on creating legacy spaces, legacy schools and promoting acts of “reconcili-action”- in other words, meaningful action that promotes reconciliation.

As Midanik points out, the legacy room at the back of Miss Lily’s Cafe is the first of its kind in Canada.

“The idea is to earmark physical space dedicated to providing learning and engagement opportunities around the history of Indigenous Peoples and reconciliation,” said Midanik. “Sometimes, it’s a matter of creating interactive indigenous place making spaces where you can engage with the culture for a deeper understanding of what’s happened in this community and country.”

“One thing I want to touch on is space can be anything. It could be on the bench beside John A., it could be in city hall or your library. It could be in your ethos in terms of why you’re doing a land acknowledgement. Is there a policy at the city level or does it go deeper than that?” queried Midanik.

Midanik pointed out that even the communications conglomerate, Rogers, decided to create a legacy space at their head office in Toronto.

“There is so much good work to be done and there is really no wrong approach if you approach the work with the right intention,” posits Midanik. “Being willing to say that you don’t know where to begin or just being able to lean into the discomfort of saying, ‘Maybe we didn’t have great relationships with Indigenous communities in the area, but what can we do to fix that?’”

Reconciliation is only possible, contends Midanik, when both Indigenous and Non-Indigenous peoples play a role.

“Everyone has a responsibility,” she says.

“Is that our job or is it our job collectively? We want to make sure we’re behaving in a way that our ancestors are going to be proud of,” said Midanik.

Instead of arguing about the value of a statue, she argues it’s of more value to have a conversation wherein the difficult parts of our shared history are acknowledged, in hopes history will not repeat itself.

“To be clear, within the context of what’s happening with Indigenous communities currently, things haven’t changed all that much-residential schools, child welfare, the over representation of Indigenous People in incarceration. The vehicle may have changed, but it’s still happening,” Midanik stated. “How can we make sure that within the context of the decisions we’re making in terms of policy and electoral leadership, that we’re not responsible for the genocide of people or culture in modern day times and what does that look like? Let’s talk about it.”

Emphasizing the need for examples of Indigenous Design in Canadian spaces were Lucier-Laboucan and Brook.

Hailing from the Little Red River Cree Nation in Northern Alberta, Lucier-Laboucan describes the housing crisis on her reserve as being the impetus behind her career in architecture.

“My experience growing up on my reserve and witnessing the housing crisis first-hand really impacted my reasoning for wanting to go into architecture and really do something tangible to create a physical presence of Indigenous Identity to the fabric of Canadian Communities,” she said. “I also eventually hope to do something about the housing on reserves.”

Already, Brook McIlroy has designed several Indigenous spaces throughout Canada, from the Ishkodewan Courtyard at Algonquin College to the Awen’ Gathering Circle in Collingwood. Other post-secondary institutions to create Indigenous spaces are Mohawk College, Humber College and University of Toronto, among others.

Brook, architect, urban-planner and co-founder of Brook McIlroy describes himself as grappling with his identity as a Non-Indigenous Canadian over the past ten years. Like any conversation, Brook describes the process of the work they do as being as important as the product.

“I want to weave through a little bit about this idea of restoring Indigenous presence but also, how we work together,” said Brook.

The process of Indigenous place-making is important, he notes, is an important act of restoring some of the land that was taken from Indigenous peoples through colonization.

“Indigenous peoples have been on this land for at least 15,000 years and if you compare that to the period of time that newcomers have been here, it’s such a small fraction of the identity of this country,” Brook stated.

Of the 1 billion hectares that belonged to Indigenous peoples prior to the arrival of Europeans, only 3.5 million hectares have been allocated to them through the Indian Act, stated Brook.

“When you start to look at the struggle that Indigenous communities have, so much of this has to do with the trauma of all of that land being taken away,” he iterated. “ Land, in this context, is everything.”

For more information about Brook McIlroy and the work the do, please visit: https://brookmcilroy.com/

And, for information regarding the Downie Wenjack Fund, please see: https://downiewenjack.ca/