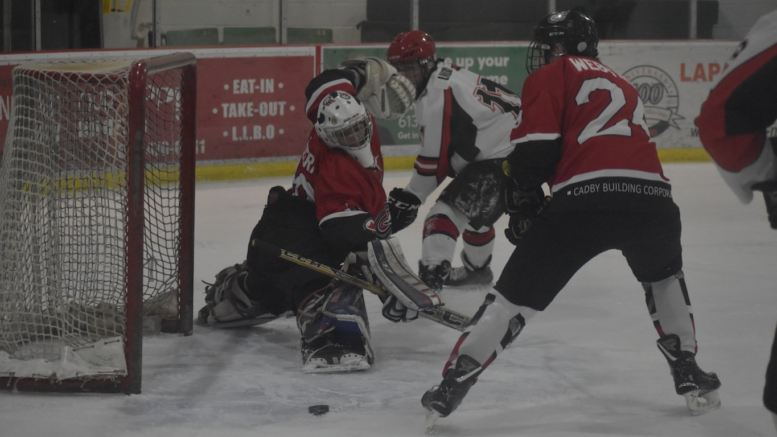 SERVING IT UP With Picton Pirate Dawson Lindsay on the hunt for a rebound, Clarington Eagles goaltender Alex Lapizzera makes an acrobatic save. at Huff Estates Arena Tuesday night. The Pirates came back on the visitors in a 4-3 win, the club’s 16th victory in 18 games. (Jason Parks/Gazette Staff)

Just when one might think the odds will catch up with the red hot Picton Pirates, the local Provincial Junior Hockey Team reaches into its collective bag of tricks and wins another hockey game.

With a busy set of contests this week which saw them play four games in the span of six nights, the Pirates trailed in the third period of two of the four matches and won all of them, picking up eight points in a high crucial part of the PJHL season where every team is desperate to improve their standing.

But trailing or giving up leads in the third period was apparently no matter to this group that’s now won an incredible 16 of its last 18 PJHL regular season games including its most recent triumph, a trademarked come-from-behind win over the Orr Division leading Clarington Eagles at Huff Estates Arena Tuesday night.

One could even colour Pirates coach Tyler Green impressed at the current run Picton is on. “I don’t even know anymore,” Green said following Sunday night’s 3-1 road win over Amherstview. “These guys just keep amazing me from game to game. It was one of our best and complete games of the season. A real gritty effort.”

The same is true for Picton’s 4-3 win Tuesday over the Eagles who came into the game with just six regular season losses and the Orr Division’s best winning percentage.

Without the services of the club’s top scoring defenceman Nick Kyte and better than point-per-game forward Brian Bygrave, the Pirates were able to comeback on Clarington who had built a 3-1 lead through the midway point in the contest.

Down a pair, the Pirates were abe to jump back into the game thanks to Picton native Nolan Dawson who converted a Jacob Dietz feed with under three minutes to play in the frame and make the score 3-2.

Dietz would take a minor at the close of the second but Landon McLellan would set up Will Harrison just 1:27 into the third to tie the game at 3-3. With the Eagles stunned, the Pirates capped off the comeback and it was Dawson beating Eagles starter Alex Lepizzera at the 2:21 mark to give the locals their first lead of the contest since way back in the first when Nate Boomhower has staked Picton to a 1-0 just 16 seconds into the game.

Kyle Renaud was brilliant for his club in the third as the Eagles, already having been defeated by Picton earlier this season, were eager to scratch out at least a point by forcing overtime. The Woodlawn, ON native would make 18 of his 34 stops in the final stanza as Picton preserved the win and moved into sole possession of second place in the Tod Division.

With a record of 23-14-2, the Pirates and their 46 points are now two points clear of the Amherstview Jets although that club has three games in hand on Picton.

The Pirates take a rare Thursday night off and return to action on Friday when they travel to Campbellford to play the Rebels.

Picton’s next home game is Thurs., Feb. 6 against Amherstview.